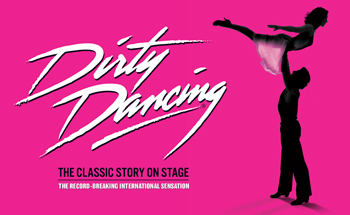 What must be every girls favourite film, Dirty Dancing  hits the stage with a brand new production showing at DeMontfort Hall, Leicester until the 15th April and the New Alex Theatre, Birmingham from 29th May to 3rd June. We sent our own Dirty Dancer, Lilith Hunt-Sheppard along to watch the production for herself.

I must admit, growing up with the hype of the film and watching it repeatedly, I’ walked into the theatre feeling that i’d had my fill of the story, however… I have to start by saying that this new stage production absolutely blew me away and surpassed all and any expectations I may have had.

Opening with Baby on the stage contemplating life with dancers moving beautifully around her, I knew from that moment I was about to fall in love all over again. Baby played by Katie Hartland adds a real naivety to the character along with some great comedy acting too. Coupled with Lewis Griffiths’ Johnny, their Chemistry makes you feel you watching a young couple falling in love.

Other favorite in the cast though has to be Carlie Milner who plays Penny, her depth of character and skill of her dancing were mesmerising. Musically the show is brilliant, filled with great harmonies  & live musicians making you feel that you as though you are simply of the guest enjoying the hotels entertainment.

The use of the set is very clever, managing to keep all the iconic scenes from the film but enabling quick changes for different scenes in smooth movements and with a few surprises thrown in to keep the audience on their toes.

Closing the show, the audience on their feet you could see that the cast had had just as good a time as we had making you wonder if they, like us had had the Time of Their Lives…

A definitely must see show!