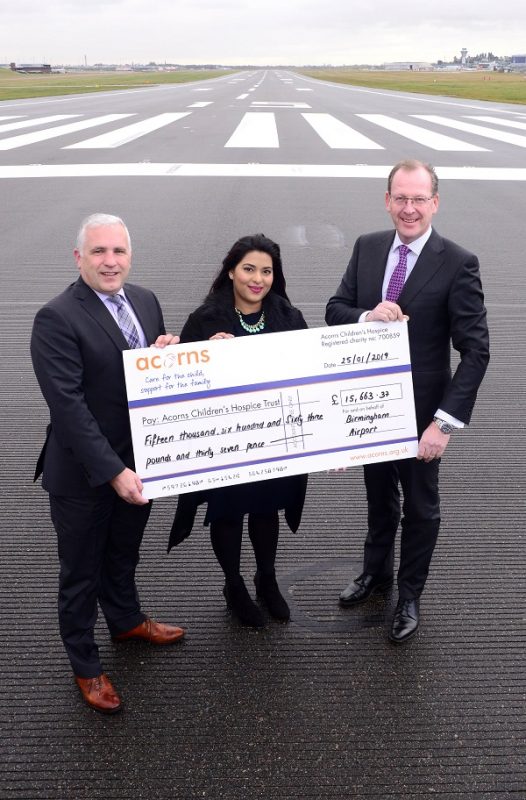 Birmingham Airport employees, friends and family came together to take part in a midnight run down the runway, in aid of the Airport’s charity partner Acorns Children’s Hospice.

More than 120 participants took part in the run, braving cold and wet conditions at just past midnight to tackle the three kilometres of the Airport’s runway, which was specifically closed for the charity run.

Between them, they raised more than £15,000 to help pay for the vital services Acorns provides to life-limited children and their families across the Midlands.

Birmingham Airport has been a long-time supporter of Acorns and has used the Airport infrastructure to raise funds before – back in 2016, 50 employees raised £12,000 in a 100-foot charity abseil from the roof of the Airport’s headquarters, Diamond House.

“We’ve partnered with Acorns Children’s Hospice for ten years and it’s a charity that’s become very close to the hearts of many of our employees. We knew people would be excited by the prospect of running the length of the runway – it’s not the sort of thing you get to do every day, after all.

“It costs Acorns £7,000 a day to run their services and with the money we’ve raised we can pay for two days care – something we’re extremely proud to be able to do. I would like to thank all those who took part and all those who supported them with their sponsorship.”

Amanda Smallman, Senior Fundraising Manager for Corporate and Community at Acorns, said: “What a fantastic donation! The Runway Run has to be one of the most unusual ways for supporters to raise money for Acorns – and in freezing temperatures too. The determination and commitment of participants is wonderful. Thank you to everyone who took part, this money will make a real difference to the children and families we support.

Airport CEO Nick Barton was joined on the runway by Richard Gill, who took the title of top fundraiser with an impressive total of £1,775, to hand over a cheque to Acorns Corporate Fundraising Manager Natalia Keene.

To find out how you could support Acorns, please visit www.acorns.org.uk