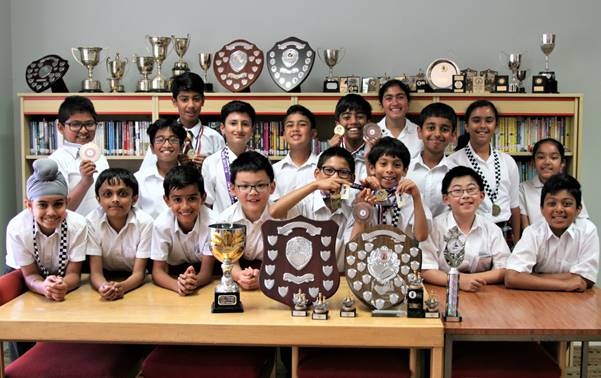 In 1976 Edgbaston’s Tony Miles, a former pupil of King Edward’s School, became Britain’s first Chess Grandmaster. Just down the road from his former school, two boys from Hallfield School are on track to follow his example.

On 28 July, Rohan Pal from Solihull took part in the Under 9’s tournament at The British Chess Championships where he proved to be unbeatable, becoming the British Under 9 Chess Champion 2018.

Similarly, Year 10-year-old Manvith Sandhu – Hallfield’s strongest player and winner of many local and regional titles – had his best result ever when he came second in the Under 11 tournament in a field of Britain’s best young chess players.

Both boys were delighted with their achievements. Rohan said: “I knew I had a good chance, but to win is just amazing!”

Nick Thomas, Hallfield School’s Chess Coach, said: “Rohan was simply unstoppable. He has come a long way in the time I have known him – he is a very talented player.

“Manvith played fantastically well and scored 5/6 in a field of 59 of Britain’s elite Under 11 players to come joint second, a brilliant result.

“This is the very top event for junior chess players in Britain and an incredible achievement for both boys and also for Hallfield.”

Hallfield School is one of the best schools for elite junior chess in the country being IAPS and ECF National Champions 2018.