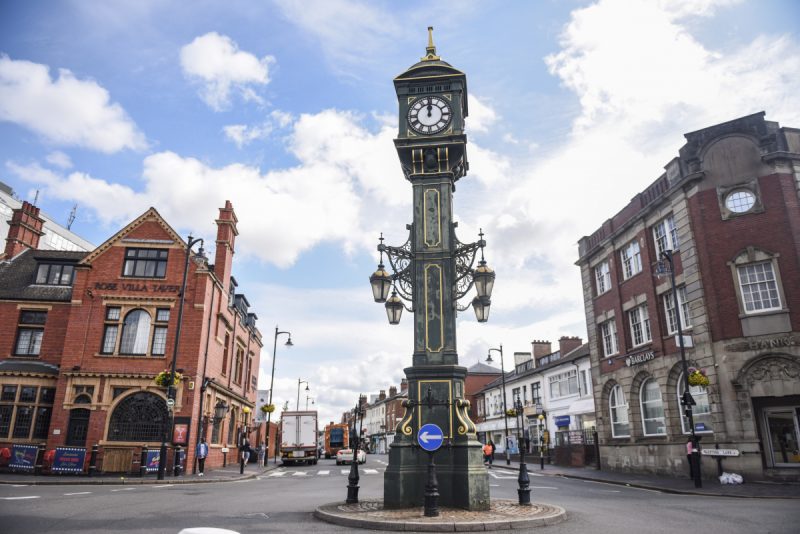 Following an extensive restoration project to restore the Birmingham landmark to its former glory, the Chamberlain Clock will be reinstated on the roundabout junction of Warstone Lane and Vyse Street in the Jewellery Quarter on 20th-21st March 2021. The reinstatement will also include the installation of a new interpretation panel near the Rose Villa Tavern, which will explore the history of the clock and its namesake, Joseph Chamberlain.

Since its removal in August 2020, the Clock has been restored to its former glory by specialist Midlands clockmakers Smith of Derby. The restoration project included treatment of the cast iron column with primer and undercoat, before the final coats of fresh green paint and the application of English gold leaf. The Clock movement has also been repaired and the bell restored, ensuring that the Clock will chime once again. The refurbishment of the Clock was a winning pledge in Jewellery Quarter Business Improvement District’s (JQBID) 2017 renewal proposal. The project, led by the Jewellery Quarter Development Trust (JQDT), has been able to happen through funds raised by the JQBID and the Jewellery Quarter Townscape Heritage (JQTH) project, a National Lottery Heritage Fund (NLHF) scheme. A key partner to the JQDT, the NLHF has contributed £75k to the Chamberlain Clock restoration and over £1.8 million to the JQTH project overall.

Luke Crane, Executive Director of the JQDT said: “The Chamberlain Clock is a historic part of our city and we’re honoured to be able to deliver on its restoration to its former glory. The addition of a new historic interpretation panel is also a crucial part of this project to ensure we’re telling balanced stories about the impact of our city’s historical figures.”

The content for the new interpretation panel has been produced by three young co-curators, Rahma Mohamed, Chelsea Mills and Salim Dabo as part of the ‘2 Visions 2 Legacies’ project. They have been supported throughout the process by an advisory group formed from heritage professionals and members of the Jewellery Quarter community. The research that the co-curators have carried out over the last few months will also be displayed online and will inform a short film they are making which explores the lives of Joseph Chamberlain and Warrulan, an Aboriginal Australian who is buried in Warstone Lane Cemetery.

“The reinstalment of the Chamberlain Clock is a positive step in the ongoing regeneration of the Jewellery Quarter. This project has given local young people the opportunity to not only learn about heritage, but to become truly involved in it. Giving people a chance to have a closer understanding and relationship to heritage is something we are proud to fund”.

Kate O’Connor, JQTH Activity Programme Manager, said: “One of the aims of the 2 Visions 2 Legacies project is to tell balanced narratives about historical figures linked to the Jewellery Quarter. The production of the interpretation panel, led by our co-curators, is a really positive step in engaging with the public in ongoing discussions about heritage and culture.”

Rahma Mohamed, one of the co-curators working on the 2 Visions 2 Legacies project, added: “It has been really interesting getting to research the Chamberlain Memorial Clock and the wider persona of Joseph Chamberlain. His popularity as Mayor and then MP for Birmingham has been well-documented, and through this memorial to his role as Secretary of State for the Colonies, we can appreciate the true extent of that. Focusing on the Clock has also given us an avenue to explore the global influence of Chamberlain and to gain a more balanced understanding of his legacy, beyond Birmingham.”

Diversions/road closures will be in effect throughout the weekend, from 6am on Saturday 20th March.

To view the map of the road closures and for further details on the Chamberlain Clock project, visit: www.th.jewelleryquarter.net/the-chamberlain-clock/