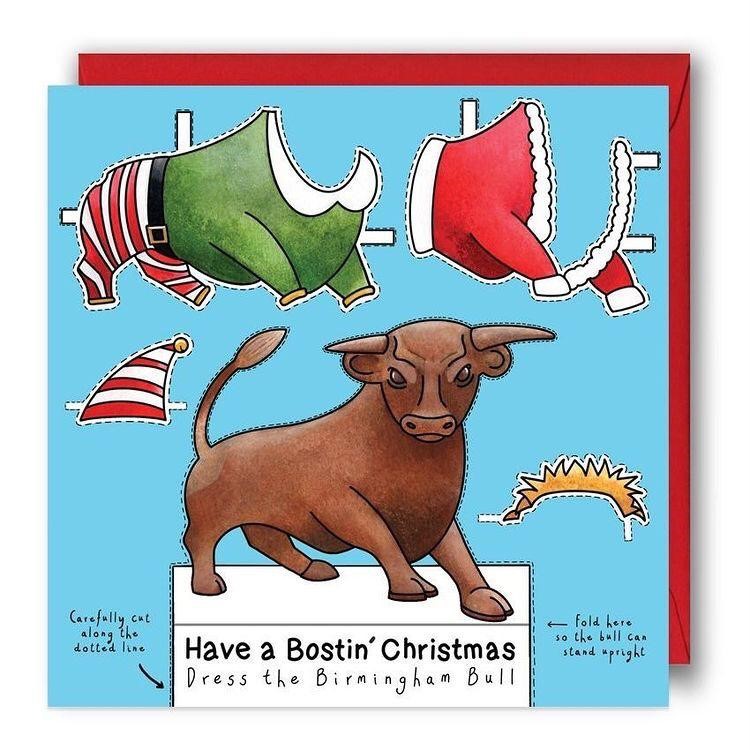 Birmingham illustrator, Shelli Graham, has designed a ‘Dress the Bull’ Christmas card allowing the recipient to dress him up in some of his most iconic Christmas outfits.

The Paper Doll style cards, which allow you to dress the Bull up in his Christmas jumper (2013), Christmas Elf (2015), Christmas pudding (2017) and Hip Hop Santa (2018) costumes, are now available online from Shelli’s website, Yeti Cards and Gifts (https://yeticardsandgifts.com/collections/christmas/products/birmingham-bull-christmas-card).

Bullring & Grand Central have partnered with Shelli to raise funds for the centre’s charity partner, Queen Elizabeth Hospital Charity, with 10% of the sales from each card being donated to the Young Person’s Unit within the hospital.

Danielle Bozward, Marketing Manager at Bullring & Grand Central, commented: “We’re delighted to be working with Shelli to help raise funds for Queen Elizabeth Hospital Charity. Our iconic Bull is famed for his outfits so it’s fantastic that Shelli has been able to create these Christmas cards so that fans can dress him up at home.”

Shelli Graham, added: “This Christmas I wanted to create a card that lasts; one that could be cut out, transformed and enjoyed year after year. I chose to represent the Bullring Bull as it is one of the most iconic symbols of Birmingham. Each year I look forward to seeing the Bull’s new Christmas outfit and I wanted to pay tribute to Birmingham’s beloved mascot. I’m delighted to be able to partner with Bullring & Grand Central to raise vital funds for the Queen Elizabeth Hospital Charity.”