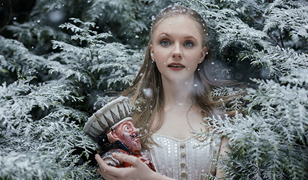 Birmingham Royal Ballet will move their 2020 adapted version of The Nutcracker online with the magical Christmas production being streamed live from The Birmingham Repertory Theatre on Friday 18 December at 7.30pm, giving audiences an experience as close to watching it live in the theatre as is possible.

Director of Birmingham Royal Ballet Carlos Acosta said ‘I guess you could say we’re trying to look on the bright side at the moment! By live streaming this new adapted version of our famous and much-loved production we can proceed with confidence and focus on making the event as special as possible for our wonderful audiences and now, wherever you are in the world, you can be part of it. I can’t deny it’s disappointing not to see everyone’s happy faces in the theatre, but we will plan to end the year on a Christmas high, finding ways of celebrating is important right now.’

Sean Foley, Artistic Director at The REP said: ‘We hope this newly announced Live Stream performance of The Nutcracker at The REP will bring a flurry of theatrical magic and seasonal warmth into families’ homes this Christmas. Teams at The REP and Birmingham Royal Ballet have been working tirelessly since new safety measures were announced to make this very special, one-off adaptation of the classic festive tale. We are tremendously excited to share it with thousands of people across the world at the same time – the first time ever a performance has been streamed ‘Live from The Birmingham REP’.

In light of the performances being cancelled the Company has again focused on finding solutions and decided to tackle uncertainties by enabling audiences to enjoy the world premiere of this new adaptation from home. After the cancellation of this year’s full production at the Royal Albert Hall, this will be the one chance to experience Birmingham Royal Ballet’s Christmas classic this year.

The full-length Nutcracker will be shortened to an 80-minute magical experience that will retain all of the most enchanting moments and characters you would expect and hope for –  Snowflakes, Drosselmeyer, Fritz and Clara’s Christmas Eve party, King Rat’s battle, the Kingdom of Sweets dances from around the world, the iconic Sugar Plum Fairy and, of course, The Nutcracker Prince – and features the cherished Tchaikovsky score performed live by the Royal Ballet Sinfonia conducted by Paul Murphy.

Tickets cost just £15 and are available from brb.org.uk/nutcracker-online