NEW LEASE OF LIFE GIVEN TO MERIDEN ADVENTURE PLAYGROUND 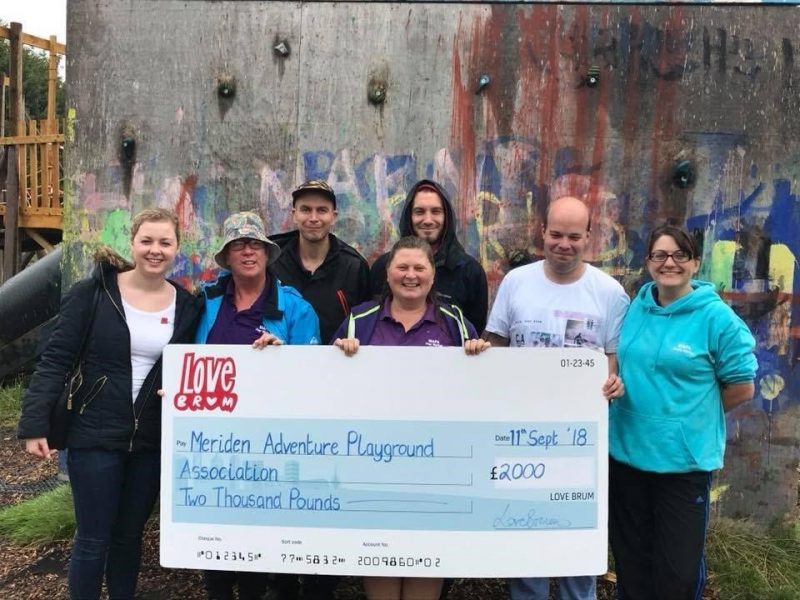 Solihull-based charity Meriden Adventure Playground Association have been given a generous £2,000 donation by Birmingham-based charity LoveBrum, in a bid to develop the popular community space for young people in the local area.

Meriden Adventure Playground Association first began in December 2012 to support and develop the Lottery-funded playground. The association was granted charity status at the beginning of 2017, before discovering the council would no longer provide funding. Despite this, the organisation works hard to provide an exciting place to play for the young children in the community.

The new funding from LoveBrum will help the charity develop more opportunities for young people, especially teenagers, including the design and build of go-karts and repair of the climbing wall.

Generating opportunities for creative and physical activities, Meriden Adventure Playground aims to compensate for the lack of recreational space available to the younger generations of Chelmsley Wood. The playground is free of charge and welcomes anyone to enjoy the outdoor play area. There is plenty for visitors to do with purpose-built wooden climbing structures, a sandpit, fire pit, zip wire, swings, a tunnel and open space for visitors to use however they wish.

The adventure playground has become central to the neighbourhood and popular amongst young children in the local area. Up to 450 children visit during the school holidays each day, with anyone over the age of 7 able to attend unaccompanied. The playground’s ethos enables children the freedom to explore without too much interference from adults. The staff encourage parents to practice this ethos and build relationships with their children by letting them choose how they want to play.

“We are delighted to be able to support Meriden Adventure Playground Association with their ongoing development. Not only is it a great area for children to play, it also provides support and a food bank for local families. Our members were captured by the work of the team and voted them as winners of our latest monthly vote.”

After introducing the community café for the parents, it became apparent that many families were unable to pay for meals – particularly those who relied on free school meals. The organisation took matters into their own hands and provided food free of charge for the children every day.

Although the playground was originally set up for younger children, the neighbourhood has seen closure of a range of council run youth centres. With this in mind the association is now working hard to cater for teenagers also. The generous funding from LoveBrum will help this transition and enable Meriden Adventure Playground Association to set up more opportunities for young people, with the likes of designing and building go-karts, as well as the repairing of the climbing wall.