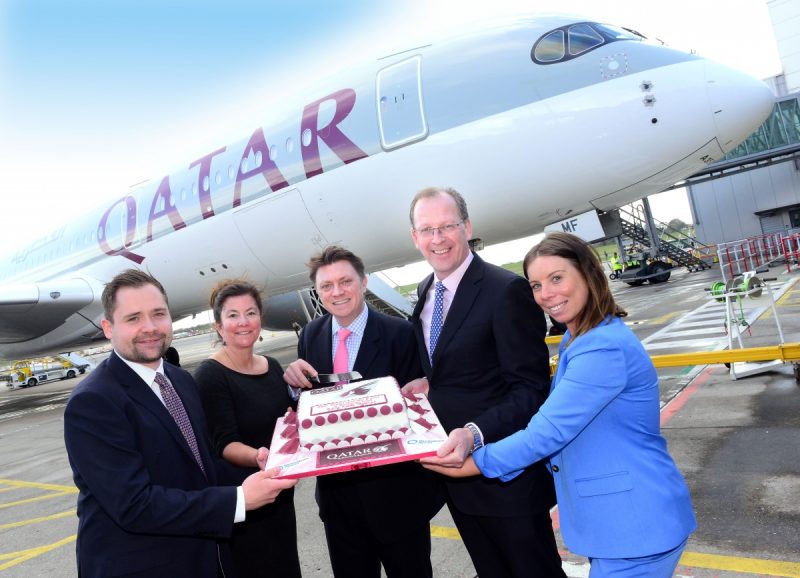 In celebration of its birthday, the airline showcased its new A350 on the lunchtime service from Birmingham to Doha which holds the new Qsuite. This business class product, promoted as a first in business, has fully lie-flat double beds, and a new quad configuration; a private space fully adaptable with movable panels that allow passengers to transform the area in to a social or business space to work or socialise at 40,000 feet.

“Having carried almost 400,000 passengers during its three years, Qatar Airways is a key partner airline of Birmingham Airport. The service gives passengers access direct to Doha and onwards to over 160 destinations around the world.  We look forward to continuing to work together with Qatar Airways in the future.”

Gary Kershaw, Country Manager (UK & Ireland) at Qatar Airways, said: “We’re proud to be in Birmingham and to have flown nearly 400,000 passengers over the last three years. It is a hugely exciting time for Qatar Airways. The demand from our UK destinations, including Birmingham, has never been stronger. That’s why this summer we’re providing our highest ever number of connections between the UK and Ireland and Doha.

“Bringing the A350 to Birmingham Airport is a great way to celebrate our third anniversary, and we look forward to showcasing our ever-growing fleet and the award-winning Qsuite offer on board the A350.”

The A350 features many environmental benefits including the latest in aerodynamic design, carbon fibre fuselage and wings, plus new fuel-efficient Rolls-Royce engines. Together, these latest technologies translate into unrivalled levels of operational efficiency, with a 25 per cent reduction in fuel burn and emissions, and significantly lower maintenance costs.

It boasts an Airspace cabin, which on top of the aircraft spaciousness and quietness, provides better ambience, design and services, contributing to superior levels of comfort and well-being, and setting new standards in terms of flight experience for all passengers.

The A350 aircraft is usually used on routes from Doha onwards, while passengers who fly on Qatar Airways from Birmingham Airport usually fly on a Dreamliner 787 aircraft in a two-cabin configuration, comprising 22 seats in Business Class and 232 Economy Class seats. All seats include individual television screens, with Economy Class customers benefitting from a screen 10.6 inches wide, offering the latest inflight entertainment comprised of up to 3,000 options, complimented by the airline’s award-winning service.

Every seat has direct aisle access in Business Class, where passengers can catch up on sleep in a fully-flat bed or make productive use of their time utilising the large work surface area. Passengers can also stay connected while travelling with the option of Wi-Fi which is available throughout the aircraft.