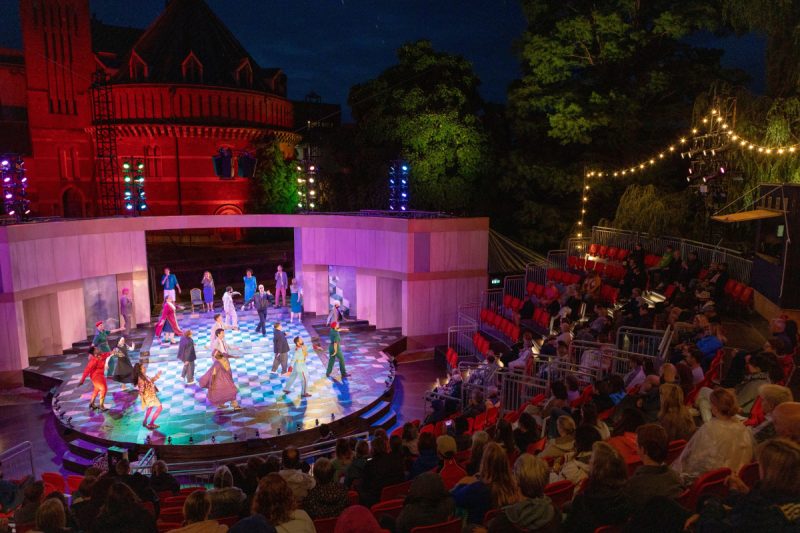 The Royal Shakespeare Company (RSC) re-opened its doors to paying audiences for the first time in sixteen months last week with a new production of Phillip Breen’s The Comedy of Errors.

The production was performed in the newly opened Lydia & Manfred Gorvy Garden Theatre, a specially constructed outdoor performance space located in the Swan Theatre Gardens, flanked by the River Avon and overlooked by the Swan Theatre. Directed by Phillip Breen the show was due to be part of the RSC’s 2020 season but was postponed owing to the COVID-19 pandemic. Following the run in Stratford-upon-Avon the production will tour to Nottingham, Canterbury and Bradford and finish the run in London at the Barbican Theatre.

Phillip Breen’s previous RSC directorial credits include The Merry Wives of Windsor, The Provoked Wife and The Hypocrite. The production is designed by Max Jones with Lighting by Tina MacHugh, Music by Paddy Cunneen, Sound by Dyfan Jones, Movement by Charlotte Broom and Fights by Renny Krupinski.

The 2021 production of The Comedy of Errors is sponsored by Darwin Escapes.

The evening also marked the re-opening of the Royal Shakespeare Company’s Rooftop Restaurant with the launch of a new pre-theatre menu. The popular restaurant which boasts spectacular views over the Bancroft Gardens and River Avon will operate a reduced menu, available from Tuesday – Sunday in line with current government guidance.

The Garden Theatre is currently selling to 50% of capacity. Following the confirmed easing of government restrictions, the RSC intends to gradually increase capacity over the coming weeks.

The RSC has made a number of changes to its building and procedures to keep staff and visitors as safe as possible. The Garden Theatre has been designed to help audiences keep their distance from other households and remain safe.

Enhanced cleaning and sanitisation of all areas of the building will take place before and after every performance or event. All cleaning regimes follow the latest government Covid-secure guidance.

All those attending a performance of The Comedy of Errors will be asked to check-in to the Garden Theatre via the NHS Track & Trace app upon entry to the theatre space.

Anyone dining in the Rooftop, whether they are attending the performance or not, will be asked to check-in via a NHS Track & Trace for the Rooftop.

Audiences are asked to wear a face covering when inside the Royal Shakespeare Theatre building, queuing in the gardens and moving around the Garden Theatre auditorium, unless they are exempt. Once seated, audience members can remove their face covering to watch the performance.

All RSC events and performances have been carefully planned to ensure social-distancing guidelines can be observed on stage and backstage at all times, which includes training staff and performers to ensure they know how to keep themselves and others safe.