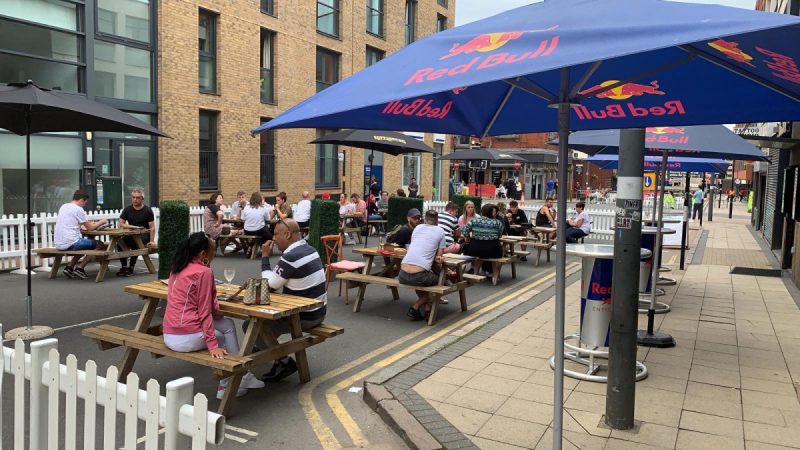 The temporary pedestrianisation of Hurst Street in Birmingham to allow for outside eating and drinking has been hailed a success by Southside District, after its first weekend of operation saw an estimated increase in trading of up to 50% for participating venues.

The road closure came into effect on Saturday 15th and Sunday 16th August, to enable the Southside StrEATery to operate from midday to 11pm each day, and will return for the next five consecutive weekends until Sunday 20th September.

Five venues were able to use the outdoor area to extend their capacities in a safe and socially distanced way, including Pepper Chef, Topokki, The Dragon Inn, Missing and The Loft Lounge.

Following the success, they will be joined this coming weekend by Eden Bar, Miss Vietnam, Chili Kitchen and Malaysian Delight.

Southside District Manager, Julia Robinson, said: “The response to the temporary pedestrianisation of Hurst Street from businesses, visitors and residents in the area has been fantastic. It has really demonstrated how we can support our iconic hospitality venues who have faced serious challenges over the past few months, whilst keeping our district vibrant and enjoyable for visitors in a safe and socially distanced way.”

David Nash, Group Operations Director of GB Holdings, which operates The Nightingale Club, The Loft Lounge and The Village Inn said: “We’ve been absolutely overwhelmed by the hugely positive reaction to the pedestrianisation of Hurst Street over the weekend. Our outside area has provided us with desperately needed additional capacity and it’s been fantastic to see increased numbers enjoying great food and drink and making use of the outdoor space offered by some of the venues.

“We’re looking forward to the next five weekends and hoping it’s the start of something more permanent in the very near future. A big thanks to Julia and the Southside team for their vision and determination to get this project off the ground.”