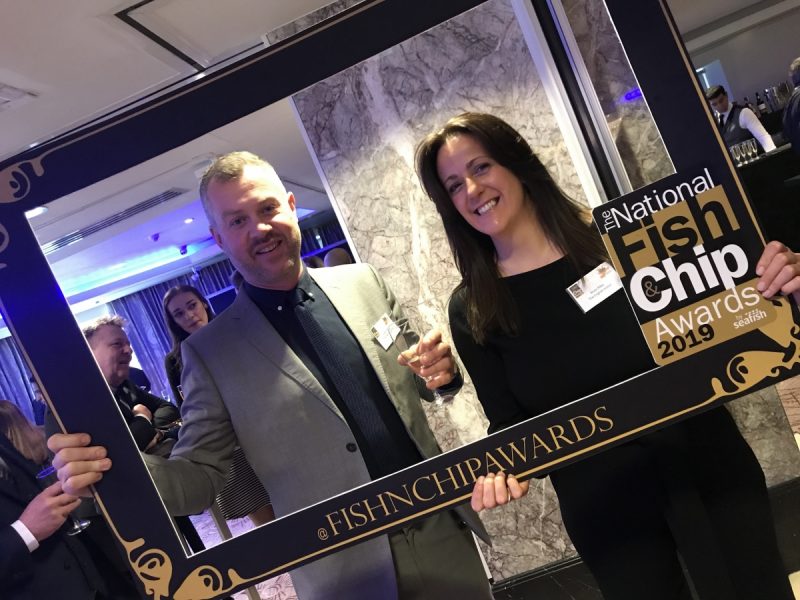 A couple from Staffordshire are celebrating after being named as one of the top five fish and chip food traders in the country.

James Lant and his partner Anna Riley, owners of The English Indian attended the star-studded award ceremony in London this week.

And despite losing out on taking home the top award, they have said they are just thrilled to have made it so far in their first year of entering such a prestigious competition.

Anna said: “It was such a fantastic day to be a part of, so that in itself was an honour. To also know that despite us only running our business for a few years, that we are already considered among the best in the country we feel is something to be incredibly proud about.

“What was also great to see was Eddie Hall, the World’s Strongest Man, presenting an award. We fed him at the very first event we did for a friends 40th back in May 2015. In fact, we very nearly ran out of food because he returned so many times for another portion,” she said.

The awards were presented by TV’s Phil Vickery, and it was Dodson’s Fresh Catch in West Yorkshire who pipped them to the post for this particular award.

The English Indian were also joined at the awards by Fish Face, another business from Lichfield who made it to the finals in the Best Newcomer category.

Anna added: “To to be in the top five for the National Fish & Chip Awards is just a dream, we’re really excited to have been included and fly the flag for the Midlands. It was also great to see Fish Face there too. They didn’t win either but it was pretty amazing that we both made it to the finals. So between us we felt that we have been putting Lichfield firmly on the foodie map.”

The couple, who swapped a life working in fashion for their dream job in food, said they would most definitely be entering again, and were considering trying out for two categories and are hoping next time to take home the coveted prize.

The English Indian was born out of the couple’s love for food and India – and they decided to combine the two.

Anna used to own Cure, a fashion store in the heart of Lichfield, while James worked in sales, and both wanted to make a change into something that would give them more freedom.

Marcus Coleman, CEO of Seafish who run the awards, said the awards had been running for 31 years, and was to recognise the nation’s favourite dish and reward those working within the industry.