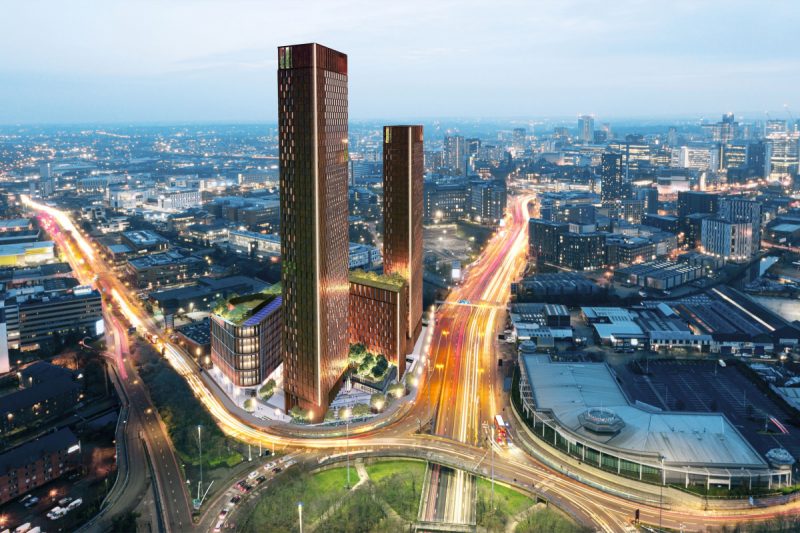 The world’s first mixed-use net zero carbon development* in a key quarter of Birmingham city centre that could create well over 1,000 jobs has been unveiled by Woodbourne Group.

The £360 million waterfront ecosystem, to be called Curzon Wharf, will be within eight minutes walking distance of the HS2 Curzon Street Station, offering sweeping views of the city and beyond.

The masterplan development of almost one million square feet is expected to boost the Birmingham economy by at least £151 million.

The hybrid plans have been designed after five years of consultation with Birmingham City Council and a world-class team of regeneration and built-environment specialists.

Developers Woodbourne Group say it will be a “truly transformative urban neighbourhood” when completed, incorporating both the latest technology and many social and mental health lessons learned from the Covid-19 pandemic.

He said: “Curzon Wharf isn’t just a development, it’s a manifesto that will position Birmingham as UK’s leading smart and sustainable city, helping to pave the way for the UK’s Green Revolution. It reinforces Birmingham position as the UK’s second city.

“It will act as a catalyst for the wider transformation of the Eastside area, where a number of masterplans have been earmarked which otherwise would not be possible. It signposts Birmingham’s route to delivering transformational change to the city.

“It will promote social, cultural and economic exchange in a truly transformative urban neighbourhood.”

The project has been welcomed by senior civic leaders including West Midlands Mayor Andy Street, who said: “This is an incredibly exciting plan, with the potential to create more than 1,000 jobs at what will be a critical time for our region’s economy as we recover from the coronavirus pandemic.

“It is brilliant to see how innovative the masterplan is, not only through being net-zero and contributing towards our #WM2041 goal, but also with the life sciences element which will help create a number of high-skilled, well-paid jobs in a key industry of the future, building on the recent investment at the life sciences site in Selly Oak.

“I will support Tani and his team at Woodbourne Group as best I can as Mayor to get this scheme moving.”

Leader of Birmingham City Council, Cllr Ian Ward, said: “This exciting project will put Birmingham right at the forefront of green, sustainable development and underlines our determination to tackle the climate crisis, while also creating jobs and opportunities for people across the city.

“We’ve shown with the recent launch of Our Future City Plan consultation that Birmingham has the ambition and vision to become a more resilient, sustainable and inclusive city and Curzon Wharf shows our determination to turn vision into reality.

“We want to work with the people and communities of Birmingham as we re-imagine and reshape our city, so I would urge as many people as possible to have their say in this consultation.”

The city centre site of 993,046 sq ft will provide new residential, retail, office, R&D and life sciences that is currently occupied by industrial units constructed in the 1960s.

The built-to-rent element will stand 53 storeys high making it Birmingham’s tallest building at 172m  (564 feet). The purpose-built student accommodation will be 41 storeys and the co-living 14 storeys tall.

The site is positioned on the northern entry to Birmingham on the A38 Aston Expressway just south of Dartmouth Circus – a site passed by as many as 21 million road users in a normal “non-Covid” year when entering the  city centre from the north.

Planning and development consultants Turley and commercial property agents CBRE have calculated Curzon Wharf will add £2 million a year in council tax and business rates and attract a New Homes Bonus of £4 million.

Mr Dulay added: “We are creating a balance of new uses that never been seen in Birmingham before with a major area of new, high quality public realm to create a unique canalside environment with its own recognisable identity.

“We need to help power the economic recovery by facilitating investment, creating jobs and acting as a catalyst to further success. Curzon Wharf does this while catering for every residential demographic set not seen in Birmingham before.

“We have targeted the provision of amenity and public space like no other with a major emphasis on mental health and well-being. This will be the first development on this major scale to respond to the issues raised by Covid-19 and Birmingham’s newly launched high-rise green vision: Central Birmingham 2040.”

Curzon Wharf is the subject of a public consultation period beginning on Friday 12 March and running for two weeks, closing on 26 March.

Representations to Birmingham City Council can be made at www.curzonwharf.com