BELGRADE THEATRE GETS WRAPPED UP IN A MESSAGE OF HOPE 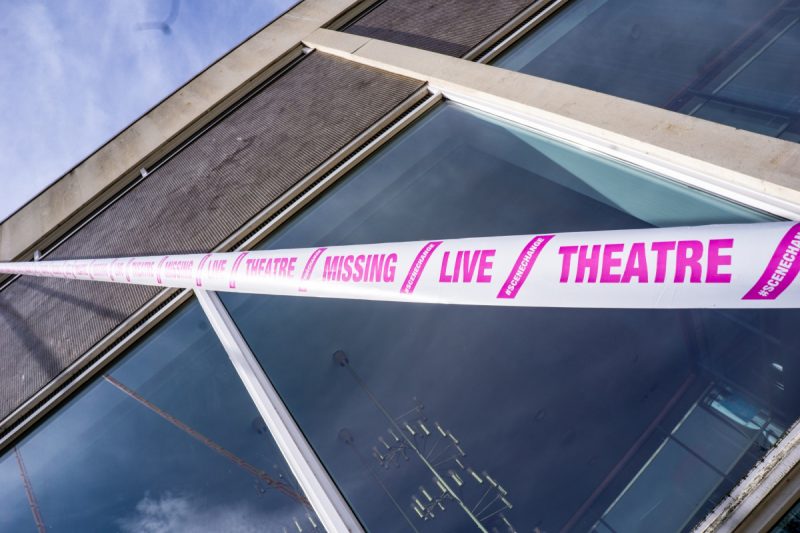 Forming part of the Scene Change campaign, Coventry’s Belgrade Theatre has been wrapped in a message of hope by local designer and Talking Birds Co-Artistic Director Janet Vaughan, using specially made barrier tape printed with the words “Missing Live Theatre”.

The project was started by members of the theatre design community, who have been uncomfortably aware of the sadness of the visual imagery surrounding theatre buildings while they remain unable to open for performances.

As lockdown restrictions have begun to ease, the Belgrade has been able to open up its foyers to cafe patrons, and is planning to start its first in-person drama workshops next month.  So, along with the news of a government support package for the arts, there are now more reasons than ever to be optimistic about the future of live theatre in Coventry.

However, the crisis is far from over, particularly for smaller companies and freelancers who remain at risk as long as performances cannot take place – which in turn has a knock-on effect on the ability of big theatres to create and programme work once restrictions ease.

Janet Vaughan said: “Theatre is as much about the freelancers, artists, audiences and communities who make it happen, as it is about buildings. Coventry is incredibly lucky to have a wealth of fantastic independent artists and theatre-makers, as well as a great range of performing arts venues, including Shop Front Theatre, the Albany and Warwick Arts Centre as well as the Belgrade. Every one of us is facing the same threat of extinction, and if one fails, all of us suffer because we are all connected.”