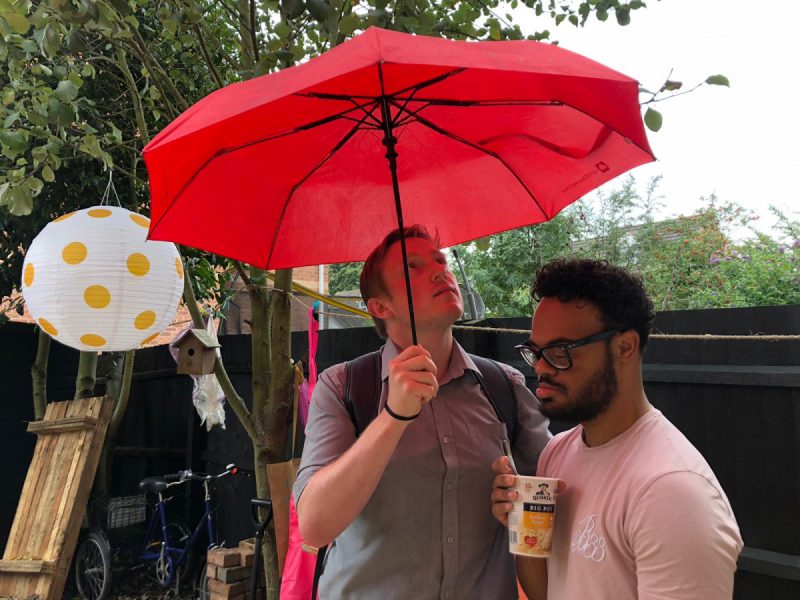 The Belgrade Theatre is delighted to be hosting the premiere of Richard and Rishard’s film The Square on Thurs 5 Aug.

In October 2020, Richard Walls & Rishard Beckett were commissioned to film the pilot episode of a brand new, fully-fledged soap opera set in Coventry.

But beset by a national lockdown in November, they were confronted with a choice:

This is the premiere of that film.

Hosted by the Dynamic Duo themselves (Richard and Rishard, not Batman and Robin), this will be a film premiere for the ages! And one which may hold its fair share of surprises.

Richard and Rishard were first brought together as part of Coventry’s bid to be crowned UK City of Culture in 2021 collaborating on Rishard’s one-man show The Yellow Post-It Notes for the bid launch at the 2016 Coventry Godiva Festival.

Richard Walls said: “Filming our soap opera on three dreary days during the November lockdown, Rishard and I tried to capture what it was that makes soap operas so engrossing. The melodramatic plots, the twists, the cliff-hangers. But more than anything we tried to capture the people, even if on screen it’s just the two of us. At its most basic, art is one human being trying to explain to another human being what it is to be a human being. That too is the stuff of magic.

“When Rishard and I set out on our first collaborative endeavour back in 2016 we had no idea where it would lead. As we enter into Coventry’s big year, now is your opportunity to get involved and take the chance we did. Take it from Rishard and I – it is and always will be a chance worth taking.”

The Square premieres in the Belgrade’s B2 auditorium on Thurs 5 Aug.

Tickets can be booked now at www.belgrade.co.uk. Supported by Coventry UK City of Culture 2021 and Unlimited.