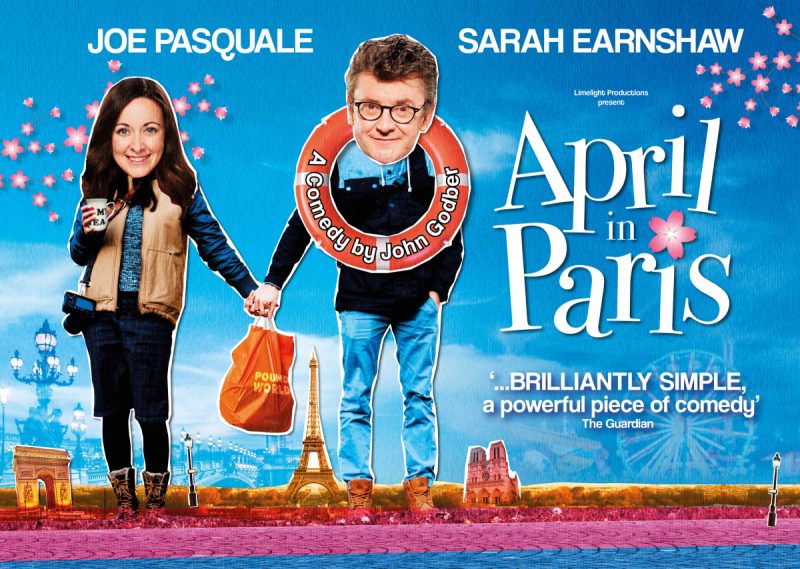 The Belgrade Theatre is delighted to be one of the first theatres in the UK reopening its doors this spring. Socially distanced, live performances will commence on Mon 17 May, as they launch the UK tour of April in Paris.

A firmly established household name, Joe Pasquale has delighted audiences with his live stand-up tours for over 30 years and along the way he’s also voiced characters for Hollywood movies and television.

Having taken on roles including Glinda in Wicked (Apollo Victoria Theatre) and Jennifer Lore in the UK Tour of Nativity – The Musical!,  Sarah Earnshaw has earned her title as a leading lady.

Al and Bet are in a rut. Married for 26 years, their conversations are running dry and life has taken its toll. There’s little to look forward to apart from the odd trip to the pub. But Bet longs to walk with the Pharaohs in Egypt, sunbathe on golden beaches and climb Alpine mountains, all fuelled by her love of magazine competitions with holidays as prizes. Finally, she wins a night away for two to Paris in April. Will this enlightening trip to the most romantic city in the world revive and reconnect this lost couple?

Joe Pasquale said: “This is probably the longest rehearsed ‘two hander’ play in history; I’ve already grown four cauliflowers and a crop of onions since we started! We have been working on it since last September, in the hope of theatres reopening in the autumn of last year. Sadly, we kept getting pushed back and finding doors shutting on us just as we were ready to perform it. So we continued to rehearse and hone it, ready for the green light and I’m very excited to say that, on 17 May, we will be the first touring theatre show out of the gate. What a remarkable achievement from all the team to make this happen. I can’t wait for audiences to come out again, remember what live entertainment means to all of us and how much we need it; performers and audiences alike…. I promise we won’t forget our lines!”

Producer and Director, Richard Lewis said: “I’m delighted to finally be able to present April in Paris! This is all the more delightful as, not only is it a funny, uplifting comedy just right for the times, it also premieres on the first day that theatre is allowed to perform in the UK again.  The production has been specially designed and rehearsed to cater for a socially distanced audience and the performance will represent a milestone in the theatre industry’s rejuvenation. I hope audiences will support a bold initiative to get theatre back where it belongs – in front of an audience – whilst supporting their local theatre and having a good laugh while they are doing it!”

The Belgrade have also recently unveiled their newly refurbished Café Bar, which is now open for takeaway and outdoor dining. Their upstairs bar, Nineteen 58, and the Belgrade Café will be open for indoor dining from Mon 17 May, coinciding with live performances recommencing.

April in Paris runs at the Belgrade Theatre from Mon 17 – Weds 19 May.

Tickets are available at www.belgrade.co.uk.