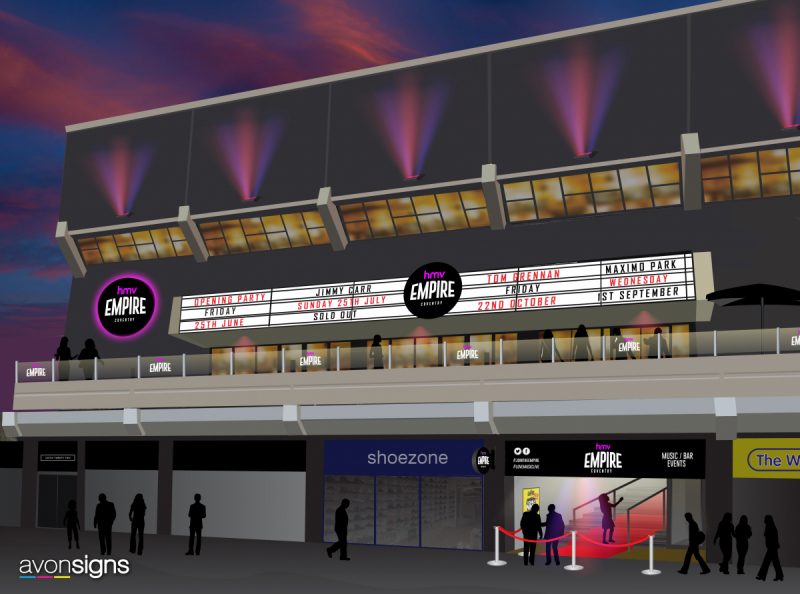 Coventry music venue, The Empire, has today announced details of a partnership with leading entertainment brand, hmv. The venue, which is in the process of re-locating to the city centre, will be known as the hmv Empire in this historic three-year deal.

hmv Empire, Coventry will open on Hertford Street this year following a £500,000 re-development of a former retail site and cinema. Although Covid-19 has delayed the opening by a number of months, this exclusive partnership gives the music venue a significant boost, placing them at the forefront of the national touring scene.

hmv Empire, Coventry Head of Programming, Dave Brayley, welcomed the partnership: “We’ve had a long association with hmv back to our original site in Far Gosford Street where we co-hosted a number of exclusive performances including a fantastic show with Sam Fender.

“This extended commercial relationship is a great step for us, putting the venue and city firmly on the map with artist, agents and labels”.

“hmv has had a very close relationship with performing artists since we started selling recorded music in 1921. We wanted to show our support for live music, performers and all those working behind the scenes at a time when that support is more vital than ever.

“As Coventry celebrates being the City of Culture for 2021, and as we celebrate our 100th anniversary, hmv’s sponsorship of this incredible new venue will help cement live music’s place at the heart of Coventry’s cultural scene and introduce music fans to new bands and artists. Together with the hmv Empire team, we’re looking forward to offering amazing live experiences as the country comes out of lockdown.”

Empire founder, Phil Rooney, is delighted to have hmv on board: “When we first thought about commercial partners for the Empire, we were keen to avoid the usual lifestyle and utility companies, we always wanted a brand with a strong musical heritage and there’s none better than hmv.

“Growing up in Cov, the hmv in Hertford Street was the one place you were guaranteed to find me every weekend. To think now that we’re going to have a premier entertainment venue in the centre of the city, carrying the name of this iconic music retailer, it just blows my mind”.

The sponsorship, which runs until 2024, is hmv’s only venue naming deal in the UK and includes the potential for artist showcases and unique album launch events, bringing a host of names to Coventry. Shows already confirmed at the hmv Empire include Tom Grennan, Arlo Parks, Roy Ayers, Maximo Park, Jimmy Carr and a number of events curated by Specials frontman Terry Hall as part of the City of Culture.

Subject to further Coronavirus restrictions the hmv Empire, Coventry is due to open with a socially distanced performance from the comedian, Al Murray, on June 11th.