NOVEL TAKES READERS TO RUGBY THE DAY AFTER THE COVENTRY BLITZ 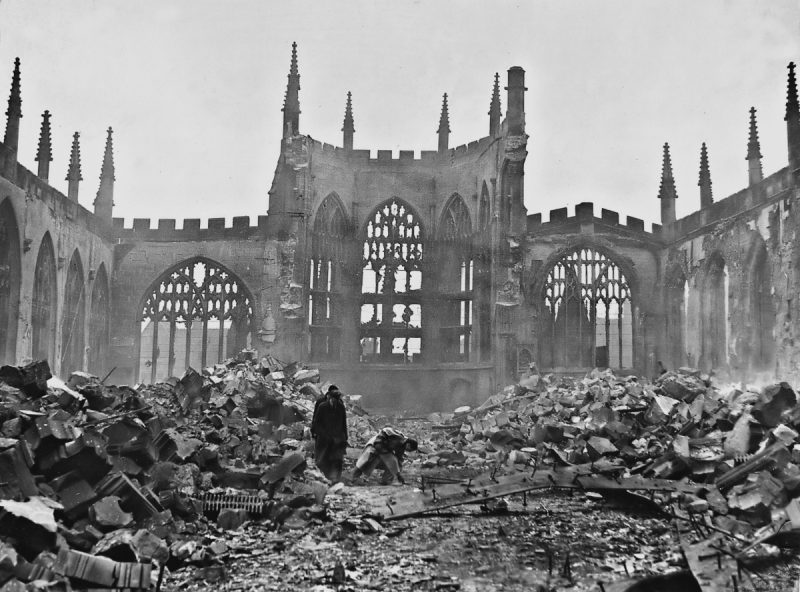 Rugby author Steve Gay has launched his evocative debut novel on the eve of the 80th anniversary of the Coventry Blitz.

Inspired by long-told tales from his own family history, The Birds That Do Not Sing is set on the day after the World War II city bombings campaign, through the eyes of a ten-year-old boy from a pacifist family in neighbouring Rugby.

Steve said: “I wanted to give readers a vivid and authentic sense of time and place, from my father’s memory of watching the German bombers overhead, Coventry burning on the horizon, and all the everyday details that framed a wartime childhood.”

He added: “There is still a rich oral history living around us, but the generation with first-hand memories of the war is slipping away from us. I hope this story will cause readers to explore their own family history, to unearth the stories and cherish them before they are gone forever.”

The launch, timed around the anniversary of the bombings last Saturday, marks a proud moment for the recently retired financial services director who reconnected with his love of writing whilst on his daily commute to London.

But it was while graduating from Warwick University’s highly regarded Warwick Writer’s Programme two years ago that his current novel began to take shape.

Moved by his father’s accounts from one of the darkest times in history, the book has been hailed as a brilliant and emotive literary arrival for the former Dunsmore Boys School student who is one of four generations of a Rugby family that stretches back to before the first world war.

Steve, 59, explained: “The central character, Jimmy, is trying to make sense of an adults’ war. He’s struggling to comprehend the mixed messages, the shifting opinions, the competing loyalties, the opposing expectations, trying to work out what it all means, particularly given that he lives in a controversial family of militant socialists, pacifists, atheists and conscientious objectors.

“It’s a book about the traumas we all suffer. It’s about the guilt that we carry, the secrets we keep, the redemption that we crave – those human adversities, qualities and frailties and how they follow us through life.”

He added: “What I described in the book are some of the real pressures my father experienced but you have to paint the truth and mould it into something more fictional as well if you’re going to create the pace that a novel requires.”

One real – and familiar – local feature of the story however, is another of Steve’s central – and personified – characters, the concrete elephant.

Built by his engineer grandfather before the start of the war, the ornamental water feature could be found for four decades on the A5, where it had been placed by the Asquith family who purchased it in 1938.

But, after many years of wondering what became of the oft-mentioned elephant, it was recently tracked down by Steve – a mere mile from his home!

He said: “In the book I have turned the elephant into a character – a confidante for the protagonist to help him try and make sense of what is happening.

“I was telling a friend about it recently who said they had spotted it in the front garden of a house just around the corner. I knocked on the door in March, much as the character does in the book, and spoke to the homeowner about it. I’m hoping when COVID is over my father will be able to go round and reacquaint himself with the elephant that he remembers as a child!“

Buoyed by the early reviews of The Birds That Don’t Sing, Steve is already looking ahead to the next chapter in his new literary career, the first in a science fiction trilogy, planned for release next summer.

For now though he is hoping that his debut novel will help set him on the path to writing success, but, most of all, that it resonates with his new army of readers.

“I never started with the ambition of publishing anything, I simply knew I wanted to write a story. But as you get into these things you start to set your sights a bit higher and become more ambitious,” he said.

“It is lovely to hear that other people are reading it and getting some enjoyment out of it already. That’s all you can ask as a writer. And if readers are talking between themselves about issues within the book that provoke discussion, then that’s important as well.

“The story isn’t really yours. Once it’s published it’s for the reader to decide what it is about and what it means to them.”

It’s a milestone too for Charles, now 90, who has given his son’s efforts the seal of approval.

Steve said: “The biggest compliment I’ve been paid – or ever will be paid – about this book, is from my father who said it’s caused him to understand his childhood in a way that he previously hadn’t.”

The Birds That Do Not Sing is available to order from book shops as well as online. It is also available as an e-book on Amazon.