OPPORTUNITY OF A LIFETIME OFFERED TO COVENTRY APPRENTICES 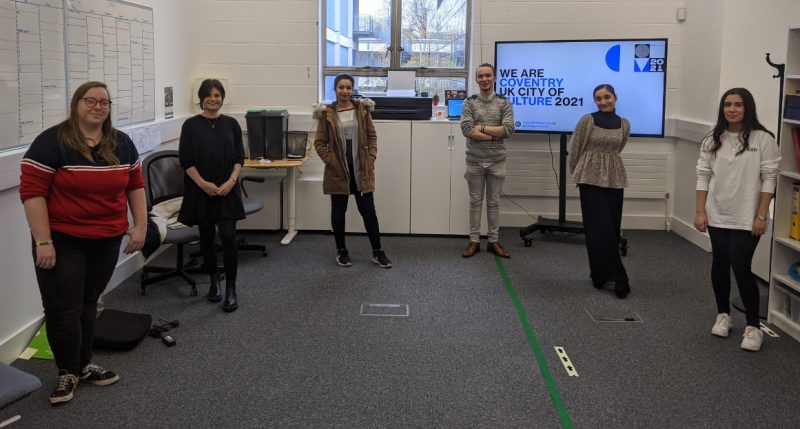 Coventry and Warwickshire residents aged between 16 and 27 make up fourteen apprentices who have started on the ‘opportunity of a lifetime’ after being deployed across the different departments which make up the Coventry City of Culture Trust team.

As well as all being given training within their specific role, whilst working towards the appropriate apprenticeship standard with the support of the North Warwickshire and South Leicestershire College, the apprentices will be fully immersed in the events, planning and delivery of Coventry UK City of Culture 2021 and the wider arts and culture sector.

The apprenticeship programme has been made possible through the support of the Trust’s core funders, including Coventry City Council, DCMS, Arts Council England and West Midlands Combined Authority. Cadent Foundation has also supported the apprentice programme, funding one of the apprentice roles in the production team.

Martin Sutherland, Chief Executive of the Coventry City of Culture Trust, said: “We are absolutely delighted to have appointed 14 extremely talented apprentices to deliver Coventry 2021.

“This is a ground-breaking apprenticeship programme for a City of Culture. It is a once in a lifetime opportunity for young people to work on an event of such scale, in their region, and to develop crucial skills for their future careers. It is wonderful to be able to fulfil our promise to the people of Coventry to invest in the skills and talent of the City”.

Hollie Edwards, the Communications Apprentice, said: “I really wanted to get involved in this massive celebration of the city. Coventry is ever changing and developing, and the City of Culture will give it an opportunity to be showcased to the rest of the world.”

The Creative Apprentice Producer for the Caring City team, Umar Sujad, said: “I wanted to join the Trust so I could make a social change while getting the chance to develop myself to become the best version of myself.”

Samuel Williams, the Ticketing Apprentice, said: “I wanted to do the apprenticeship because I want to show and tell people from all over how interesting and creative Coventry is.”