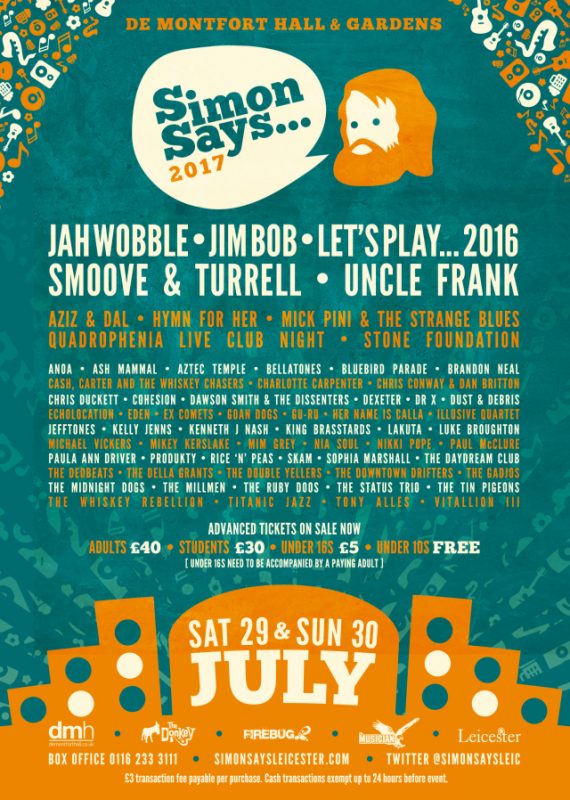 An additional 36 bands to join headliners Jah Wobble, Jim Bob, Smoove & Turrell and Uncle Frank, for the Simon Says… 2017 festival on July 29 and 30, have today been announced by organisers De Montfort Hall, The Donkey, Firebug and The Musician.

The confirmed new acts include Paul Weller collaborators Stone Foundation, Stone Roses and Simply Red guitarist Azim Ibrahim, Glastonbury first-timers Hymn for Her, a tribute to Quadrophenia featuring The Specials Drew Stansell and the return of Let’s Play… 2016 which will close the festival on Sunday night, featuring a range of local musicians celebrating the work of some of the artists that the music industry has lost over the last year, such as Prince and George Michael.

Formed by Neil Sheasby and Neil Jones, Stone Foundation are influenced by legends of American soul whilst also maintaining a distinctly British sound. Their latest album, Street Rituals, has made it into the Top 25 and was produced by, and features, the legendary Paul Weller.

Azim Ibrahim, songwriter and lead guitarist for artists including The Stone Roses, Simply Red and Ian Brown, will be joined by tabla master Dalbir Singh Rattan.

The line-up also includes the Quadrophenia Club Night, a touring tribute to the iconic mod movie Quadrophenia, with live music from The Atlantics and featuring The Specials Drew Stansell; and fresh from their Glastonbury debut in June, American husband and wife duo Hymn for Her, with their blend of country, blues and punk – which is created with very few instruments, including a custom-made cigar-box guitar.

The Donkey’s Gaz Birtles commented; “This year’s line-up, once again, will offer something for every-one; a healthy blend of new, emerging and established artists – the vast majority of which are locally based or connected with Leicester in some way. We are also very excited to be closing Sunday night with a multi-performer tribute to lost music legends – expect to end the weekend on a high!”

Families are welcome at Simon Says…, for our younger visitors we will again have a kids’ area full of activities including arts, crafts and traditional games. New for 2017 will be the Utterly Buttely Ukelele Project providing music and junk instrument making workshops (take away a TUB-Uke!), a special kid’s themed performance by various artists on the indoor stage, and comedian Jay Foreman will entertain with a kid friendly show on the outdoor stage.

To book or for more information contact De Montfort Hall on 0116 233 3111 or visit: www.demontforthall.co.uk  www.simonsaysleicester.com