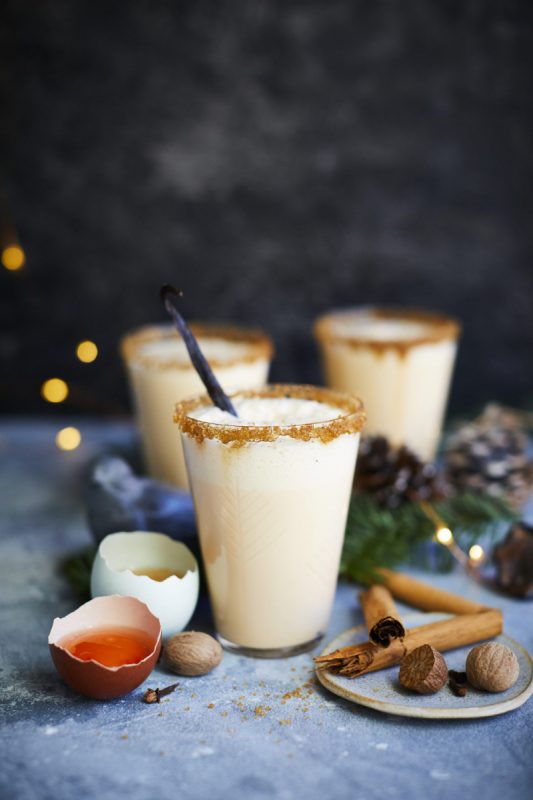 A traditional American festive punch that definitely serves as light relief when you’ve had enough of mulled everything! Delicious paired with sweet Christmas bakes, whizzed up with coffee and ice to make a light after dinner treat or just enjoyed on its own.

Make the base mixture a few days in advance to develop the depth of flavour in the fridge (feel free to leave the cinnamon sticks or vanilla pod in the chilled mixture.)

Pour the milk and cream in to a saucepan. Add the spices (including the empty vanilla pod) and place on a medium heat. Bring to a simmer (but not boiling) and allow to cool for 5 minutes to allow the flavours to infuse.

Meanwhile place the egg yolks and sugar in a large mixing bowl. Whisk well until light and thickened. Strain the warm milk into a jug through a sieve. Pour the spiced milk into the bowl of egg yolks in a steady stream whisking well. Stir in the rum.

You can either place the mixture in a cooled sterilised bottle with a tight fitting lid and allow the flavours to develop in the fridge. If you decide to do this you can freeze the egg whites in a sandwich bag until you’re ready to use. Then defrost them in the fridge before whisking.

If you would like to serve straight away. Place the egg whites in a large mixing bowl and whisk the whites to soft peaks.

Mix the demerara sugar and ground cinnamon on a plate. Have a small bowl of rum or water ready.

Fold the egg whites in to the eggnog mix then pour into a serving jug. Dip the rims of serving glasses into the rum or water and then dip straight into the sugar and cinnamon mix. Divide the eggnog between glasses and finish with a grating of nutmeg.