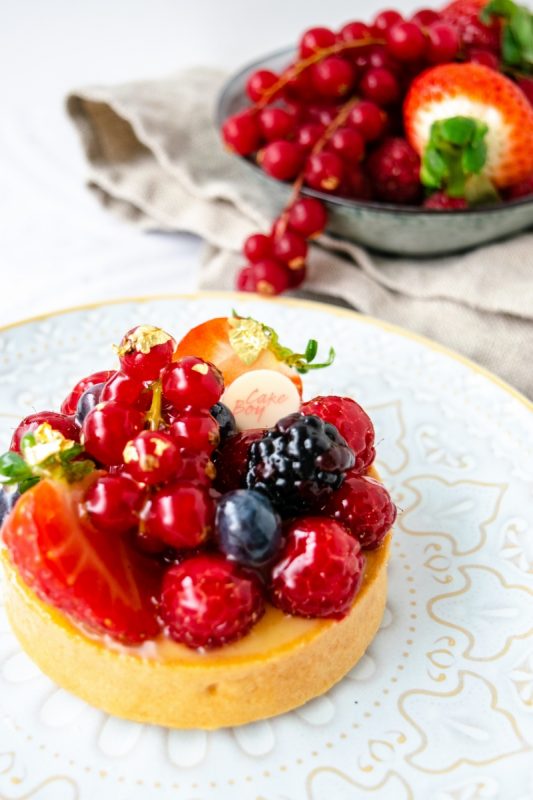 An elegant sweet treat perfect for the summer months! For this recipe, I’ve used a mixture of berries, but if you don’t fancy a mixture of berries you can pick your favourite fruit instead! You can make the vanilla Creme Patissiere & pastry in advance but assemble the tarts last minute and decorate with the fruit to avoid them going soggy!

TO MAKE THE CRÈME PATISSIERE:

• In a saucepan, combine the milk and vanilla and bring to the boil. Meanwhile in a bowl, mix together the egg yolks, sugar & cornflour.

• Once the milk has come to the boil, add to the yolk mixture, little by little, whisking as you do so. Don’t add the milk too quickly or the egg will cook into lumps! Once all the milk is added, place the mixture back into the saucepan over a medium heat, stirring all the time. Bring to the boil and continue to boil for 2 mins.

• Pass the creme patisserie through a sieve into a bowl to remove any lumps. Put cling film across the mouth of the bowl and pop it in the fridge.

TO MAKE THE TARTS

• Combine together the flour, butter & icing sugar and, using your fingertips rub in, until the mix resembles fine breadcrumbs.

• Once you have a breadcrumb texture make a well in the centre and add the egg and water and, using your hand, mix to form a dough.

Be careful not to over work this. Wrap the dough in cling film and place in the fridge for 30 mins to allow the pastry to rest.

• Once rested, on a lightly floured surface roll the pastry out and line each tart ring, trim any excess from around the edge and prick the base with a fork. Place cling film over each tart ring and fill to the top with baking beans. (Yes, cling film! It works great for blind baking!)

• Once the tart cases have cooled to room temperature, turn out from the tart rings. Fill the cases right to the top with the creme patisserie. And arrange the fruit on the top.

THERE YOU HAVE IT!

ABOUT OUR STAR BAKER

Originally from Nottingham, Cameron Lamb is a Patissier who has always had a passion for baking! After graduating from college he started in the midlands as a pastry chef before before moving to London to pursue his dream of becoming a world class pâtissier.

After attending worshops by master pâtissier Eric Lanlard he was approached to work at his Patisserie in London, Cake – Boy.

For more of Cameron’s recipes, head over to his blog www.cameronolamb.com or follow him on Instagram @cameronolamb.