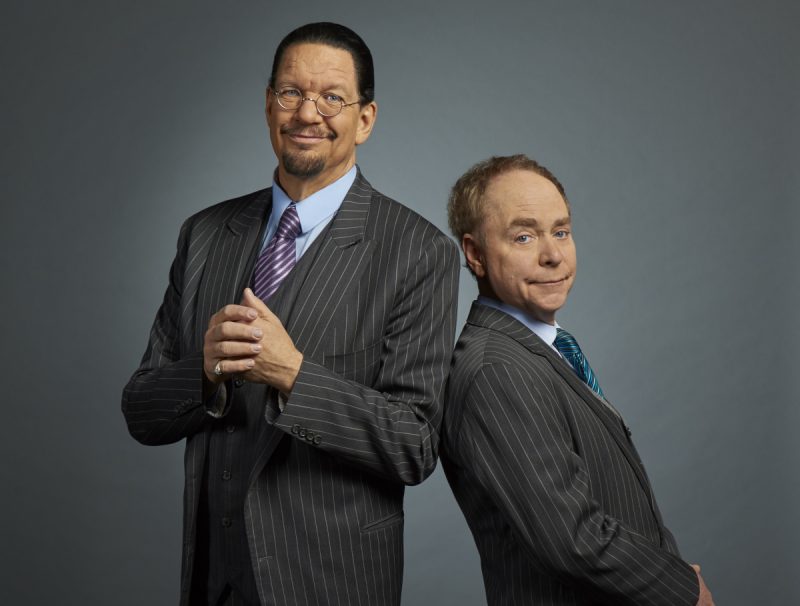 As hit West End show Magic Goes Wrong embarks on a national tour opening right here in Leicester at Curve, legendary magicians Penn and Teller reveal how they found themselves working with the team behind The Play That Goes Wrong, and how they came to cast their spell on audiences…

Over five decades, legendary magicians Penn & Teller have been sawing the magic rulebook in half. Their shows combine bamboozling illusions with dark comedy, their magic often seems to go horribly wrong, and they have become notorious for repeatedly revealing to the audience exactly how their tricks are done – which has long prevented them from being members of the Magic Circle.

Not that they mind. In fact, they revel in the illusion of chaos: one of their stage shows began with a giant fridge falling on the pair, apparently crushing them.

So when they announced in 2019 that they were teaming up with Mischief, the British team behind theatre smash hits The Play That Goes Wrong, Peter Pan Goes Wrong and The Comedy About a Bank Robbery, as well as the BBC One TV series The Goes Wrong Show, it seemed like a perfect match. The result was Magic Goes Wrong, which opened in the West End to rave reviews and is now casting its spell on audiences across the UK.

In Penn & Teller’s live shows, Penn Jillette takes the role of motormouth patter-merchant, while Teller (that one word is now his legal name) remains silent as they perform various breathtaking illusions. Many of their acts have become iconic – check out the cup and ball trick on YouTube, where Penn reveals exactly how the trick is done, and still manages to make it dazzling – and many involve comic danger, gore and violence. In one trick they aim guns at each other’s face, fire and catch the bullets in their teeth.

A few years ago they were performing in London, and Penn’s family decided they wanted to see a show in the West End. “I don’t go to comedy theatre at all,” says Penn. “I like theatre to be deadly dull, slow and depressing. But my wife and children picked The Play That Goes Wrong. I realized that not only was my family laughing harder than I’ve ever seen them, but I was too.” He immediately told Teller to book a ticket.

Despite being known for his onstage silence, it was Teller who started discussions with Jonathan Sayer, Henry Shields and Henry Lewis, the artistic directors of Mischief. “I am more shy than Teller so it never crossed my mind to go backstage,” Penn jokes, “but Teller took himself backstage and said, ‘hey I’m a star!’”

Teller insists it wasn’t quite like that: “As I was sitting in my seat, someone tapped me on the shoulder and said, ‘You’re Teller, aren’t you? The cast wants to give you free ice cream.’ So afterwards I went backstage to thank the cast and compliment them, because it really was one of the finest shows I’ve ever seen.”

What’s more, Penn had mentioned to Teller that the show featured a magic trick. “He told me there’s a moment where a person reappears in a grandfather clock, and it’s going to fool you,” Teller explains. “And he was right, it absolutely fooled me. So I said to the Mischief guys, ‘You do stuff that is so much like magic, we should do something together sometime’.” 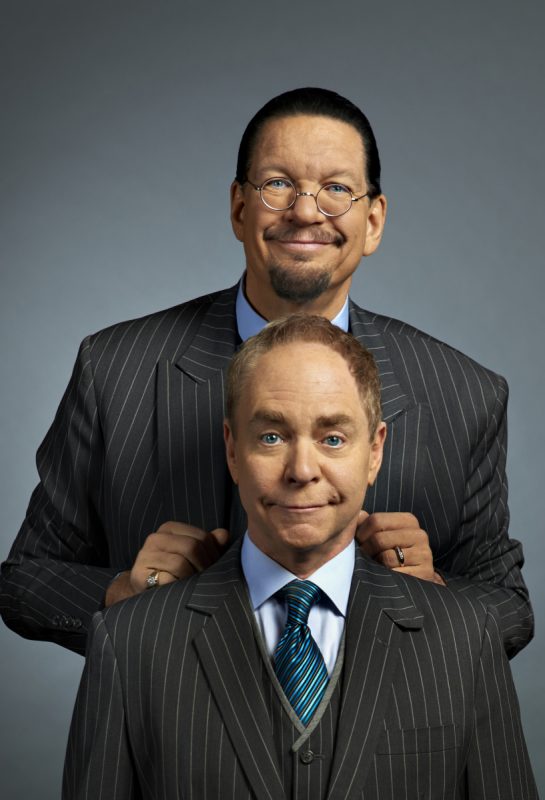 A few months later, all five of them were eating homemade pancakes at Teller’s Las Vegas house and plotting a brand new show.

Working on a stage show with unfamiliar people was a new experience for Penn & Teller who, despite decades in show business, rarely collaborate beyond the two of them. Teller has directed two Shakespeare plays, as well as a documentary film, but for Penn it was nerve racking.

“Teller and I have a dynamic that we’ve built over 46 years, so this was a huge leap of faith. We couldn’t go out to dinner with these guys, we had to jump straight into bed. We were told: they are going to be here at 10am on Wednesday and you’ll start writing your show. You won’t even know which one is Jonathan and which ones are Henry. But it took about 20 minutes before I felt like I was around my closest friends.”

Shields, Sayer and Lewis spent a week and a half putting together the bones of the show in a small side room off the stage of The Rio hotel, where Penn & Teller are the longest-running headline act in Vegas history. They taught the team magic – “they picked it up incredibly quickly” – and suggested tricks to include, while the Mischief lads improvised dialogue and story.

And while Mischief were excited to be working with two of their heroes, it quickly became clear that Penn & Teller were just as in awe of Mischief’s talent.

“There was one moment Henry (Lewis) and Jonathan said, ‘it could kind of go like this’,” Penn explains excitedly. “And then the two of them did a five minute improvisation. Now, I have sat in a room with Lou Reed playing Sweet Jane four feet from me. I’ve talked to Richard Feynman about physics. I’ve spoken to Bob Dylan. But I said, ‘this is a moment I will bookmark for the rest of my life’. I felt like I was watching the Pythons at their peak, and I thought, ‘this is why I’m in showbiz: to be that near that level of talent and skill’. And when I’m on my deathbed listing the 100 artistic events of my life, that moment will be there.”

After a few more sessions, the show had come together. But, by adding the trademark Goes Wrong approach, all the tricks in the show had to work on two levels: there had to be the trick that goes wrong, and then the trick that actually dazzles the audience. So how did they devise these illusions?

Teller explains that it’s often quite a laborious process. “You get an idea, which is usually quite grand, then you find that it’s impossible, and you revise it over and over again until it works. There’s a trick in the show where one of the cast members gets accidentally sawed in half by a buzzsaw. That was more than a year of work. Part of the trick involves blood, but if you just show the blood on stage it looks boring, it has no impact at all. So a big part of the buzzsaw trick for us was developing it in such a way that when the blood came, it would be sprayed up against a huge backdrop where you could truly enjoy the bright red colour.”

Speaking of blood and buzzsaws, Magic Goes Wrong – which takes the form of a disastrous fundraising benefit – is definitely more comically gory than Mischief’s previous work. Was that Penn and Teller’s influence? “Guilty,” says Penn with a huge grin.

“I’m afraid it might have something to do with us,” Teller adds. “We think that gore is essentially funny. It’s really hard to pull off serious gore in the theatre because people tend to want to laugh. They know that it’s fake, but they see that it looks real. And that’s very much like a magic trick.” 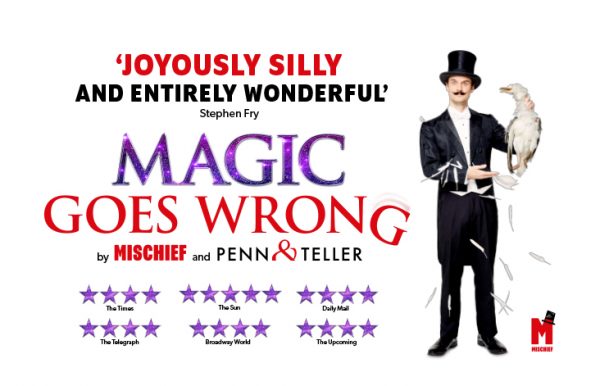 That clash – of instinct and intellect – is what Penn & Teller’s work thrives on. “What you want to do is get the visceral and the intellectual to collide as fast as possible,” says Penn. “It’s like being on a rollercoaster: I’m safe, no I’m not, I’m safe, no I’m not. Those two parts of your body are fighting.”

But despite the fact that Mischief and Penn & Teller have built their careers on making it look like everything is going horrifically wrong, they all insist that mishaps are incredibly rare in real life. “While we’re rehearsing we might get a minor cut or bruise,” Teller says. “But we don’t ever allow the possibility of something going seriously wrong because if we did, we wouldn’t have been working successfully for 46 years.”

In fact, absence of safety angers them. They disdain the kind of ‘edgy’ magicians who put themselves in actual physical danger – and even lampoon them in the show with the character of The Blade, who puts his limbs on the line for art’s sake. “If you want to see someone actually get hurt, go watch NASCAR,” Penn says forcefully. “If you want your art to be dangerous, stay away from me.”

Teller agrees. “Anytime that I hear that in the making of a movie somebody was actually injured or killed, I’m angry about that, because art is what you do for fun.” The paradox of their work, and of Magic Goes Wrong, is that they all have to be incredibly safe precisely in order to make it look so dangerous.

For Penn, what makes Magic Goes Wrong seem so right is the combination of magic and comedy. “It’s a full magic show and a full comedy show happening at the same time.”

Teller explains that there is a deeper, more unexpected layer to the show: “What’s interesting to me is how well the show reflects the actual culture of the magic world. It’s mostly populated by well meaning, very nice amateurs. And there is a great, heart-tugging beauty about that to me. The poignancy of the magic trick that isn’t quite achieved, where your aspirations are to behave in a godlike manner, and instead you’re slapped in the face by reality – I think that’s such a beautiful thing. That’s what this show is about. It has all these laughs and all these wild crazy moments, but when it lands at the end, it’s about the sweetness of friends who love magic.”

Magic Goes Wrong heads out on its inaugural UK tour this summer, opening at Curve Leicester from 20 – 24 July 2021.