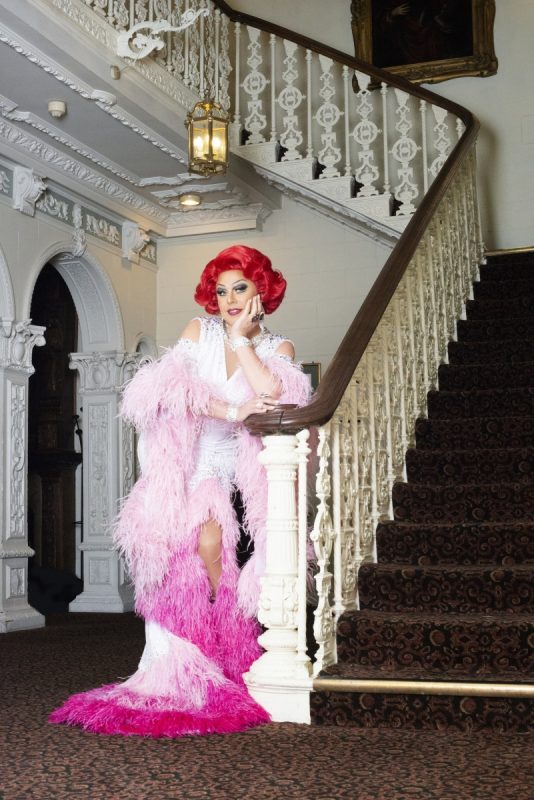 Internionally renowned & critically acclaimed diva, La Voix is one of the UK’s leading variety performers and funniest red heads performing across the globe dazzling audiences. With stints on Britain’s Got Talent and Michael McIntryre’s Big Show to appearances on the silver screen in Ab Fab The Movie, La Voix is continuing her assault on the UK. Saul Morgan caught up with her as she appeared at Leicester’s Little Theatre.

Take us back to your childhood La Voix, can you tell us a little bit about La Voix as a child.

Well, my childhood, was very theatrical, as you can imagine. My parents ran a theatrical boarding house for all sort of retired people in the showbiz world, all the greats were there, Jennette Cranky, Christopher Biggins, the unfunny one from Cannon and Ball, I can’t remember his name, all of them were there’. So of course, I grew up around all these fabulous entertainers and it’s there I had my first sort of inkling that I wanted to go into the showbiz world.

How would you say look has evolved over the years?

Well It’s evolved massively, when I started out, I was buying things off the peg, well actually I wasn’t just buying things off the peg, I had hand-me-downs when I was a child from my older sister, Jane MacDonald. I used to
get all her old hand-me-downs, some of them were quite moth eaten, I’m not going to beat around the bush. But it’s only now that I have a whole team of people from scaffolders and feather fluffers to designers and seamstresses.

What would you say are your make-up essentials?

I’m a big fan of the true red lip so much so that I’ve launched my own called Ooh La La Red- you can get it on my website. A lot of women are scared to use it but throw on a bit of red lippy and you’ll always get a compliment – guaranteed!

Would you say you have any style icons at all?

Well I used to always be inspired by Judy Finnigan on This Morning. In her time she was as cutting edge as GaGa but then she had that faux-pas on the TV awards. The minute I saw her in that oversized maternity bra, I thought, that’s it. She’s gone. So now it’s Ruth Langsford I look to. Imagine what time in the morning she has to get up, she goes to the studio, probably has a hoard of hair and makeup artists yet she still manages to look so plain and simple. I think that’s inspiring!

How would you describe an average day in La Voix?

Oh well, it starts with a yoga class, I love yoga! There’s nothing like a downward dog to set the day off. Then, my gorgeous Joanne, my vegan driver picks me up, every day’s a show day for La Voix! So, I get driven to the latest venue, the band will arrive and there’ll be a soundcheck before I’m into make-up, hair styling, costumes. The audience will arrive and it’s straight into a full two-hour live band show spectacular before popping back in the car and home. That’s my day in a nutshell. 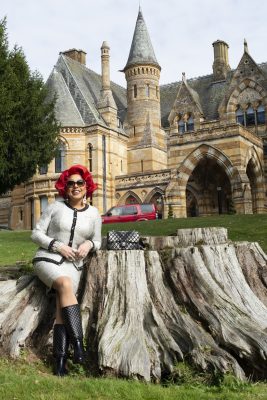 Your act is inspired by some of the biggest divas around including Liza, Judy and Cher. Has their music always been in your life?

Yes, I’ve always been inspired by those greats, you know they took risks, they were amazingly entertaining, and they all sang live, these huge, belting voices. My father had a huge vinyl collection when I was growing
up and there was always music in our house; Donna Summer, Eurovision Greatest Hits, Barbara Streisand. Looking back my Father’s record collection does raise a few questions, but we won’t go into that one…

What songs are your favourite to perform live, and why?

Ooo It’s got to be the big ones! Your Shirley Bassey belters, your Liza Minelli show tunes anything that’s big, brassy and you can belt out, that’s what I like.

You’ve worked alongside some huge stars including Joanna Lumley, Jennifer Saunders and Sir Ian McKellen to name just a few. Have you received any notable advice from them about the showbiz lifestyle?

Well Joanna Lumley taught me about the importance of carrying a pashmina. I’ve worked with so many fabulous people that I never get starstruck. Jennifer Saunders met me, she was a quivering mess I can tell you, because, these people, they need glamour in their lives. I met her doing Ab Fab the movie which was a great experience.

You were the first vibrant red head to make it to Britain’s Got Talent final, what inspired you to audition in the first place?

You’ve always got to have a gimmick on that show, a gimmick or a sob story. I learnt that very, very quickly because, of course, I went on with a twenty-two-piece London Gay Big Band, although apparently nine lesbians blowing trumpets isn’t a gimmick… Simon Cowell was so glad I was on. I think he just wanted to work and experience the presence of a natural woman; it must be hard always working with Amanda Holden and Alesha Dixon. I used to do a great impersonation of Amanda Holden actually. That’s when I was temporarily paralysed so we won’t got into that. 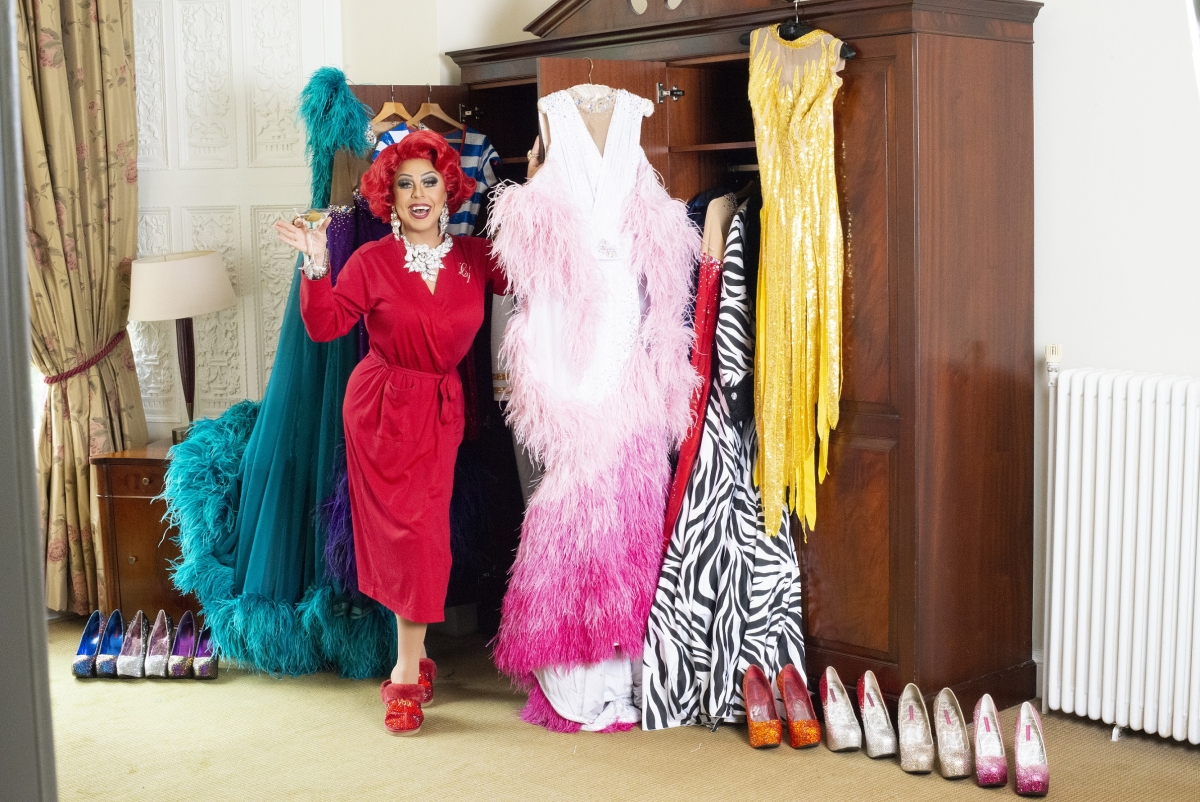 You’ve also had the chance to feature in the film ‘Absolutely Fabulous’ as you mentioned, how did that opportunity come about?

Well, Jennifer Saunders called me and said ‘La Voix I need a leading lady, a strong leading woman to carry this film forward’, so I said ‘Look I might be free Jennifer, but I am due to be the foot model for Bazuka Gel, but I’ll cancel that and I’ll be all for it’. I’m so pleased I did as I had an amazing time. Jennifer Saunders is such an inspiring woman. When I was younger I used to love watching her on television. I used to think every time that woman came on the television “If I lived in Dibley I’d go to that church.”

Oh, there has been so many highlights. I’ve had shows at the Palladium for Future Dreams charity, I’ve done the Royal Family’s New Year’s Eve party twice in Dorchester and Ian McKellen’s 80th birthday party. I even did pantomime with Sue Pollard!

What’s left to achieve that you’ve not quite done yet?

Oh, it’s to bring back good old-fashioned fabulous entertainment to television. You’ll turn on the television these days and there’s just nothing entertaining. I mean, there’s only so many times you can watch Gemma Collins falling over isn’t there?!

Catch La Voix on tour at The Old Rep Theatre, Birmingham on 30th May

Full tour dates and tickets are available at www.lavoix.co.uk