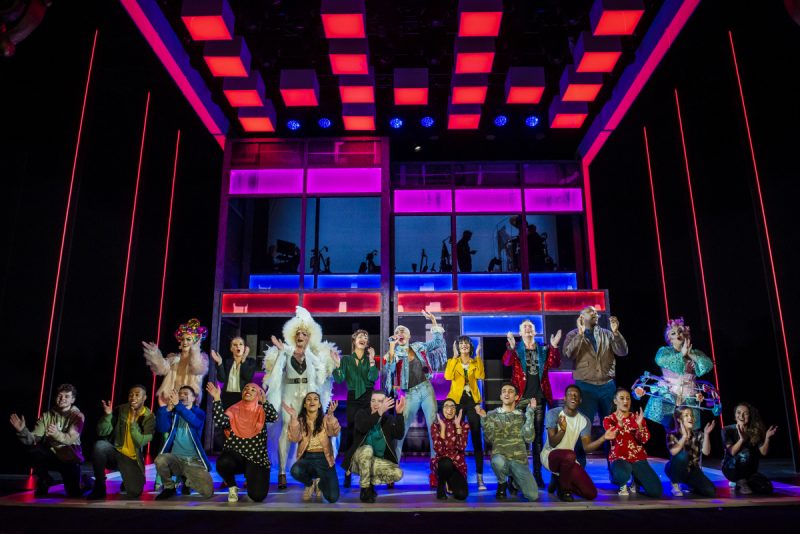 Everybody’s Talking About Jamie, the smash-hit and critically acclaimed feel good West End musical is coming to Curve Leicester as part of its First UK tour. Curve Theatre sat down to talk to Layton Williams (Jamie New)  about the iconic role and what it means to be back performing in front of crowds in some of the biggest theatres in the UK.

For people who are new to Everybody’s Talking About Jamie, how would you sum up the storyline?

Jamie is based on a real character who was the subject of a documentary on BBC Three. I remember watching it years ago and it was about him wanting to be a drag queen and wanting go to the school prom in a dress and how his mum Margaret supported him. When he got there there was all this hoo-hah, the teachers wouldn’t let him in, then something wonderful and unexpected happened, his school mates refused to go in without him. The basics of his story inspired the musical and it’s been given a bit of theatrical razzamatazz. Our story is about a 16-year-old boy who wants to be a drag queen and it’s about his relationship with his parents – including his dad, who he isn’t much in touch with. It’s about Jamie finding himself and his drag persona and, without giving anything away, what happens when he does eventually go to the prom.

What do you see as the key themes?

It’s about acceptance. This is a show for everyone, especially for today. It’s not just for people who are into RuPaul’s Drag Race and stuff like that. The show is about a boy finding his path in life with the help of his close relationship with his incredible mum and her unconditional love for him. She loves him exactly as he is. A dad who isn’t supportive and lots of other characters that people will be able to relate to. It’s about family, friendship, trust and support. There are so many different, relatable characters in it – [laughs] although if you identify with the dad then have a word with yourself! And there’s so much diversity in the cast. The real Jamie is white and I’m not, but that wasn’t even a question for the producers and creatives – which is so refreshing and so fab, like just ‘He’s right for the role’ and that’s how it should be. Oh, and there are high heels, high kicks, drag queens, beautiful dresses, feather boas, some fantastic songs and brilliant dancing. It really is fun, funny and fabulous with a lump in your throat and a little tear. 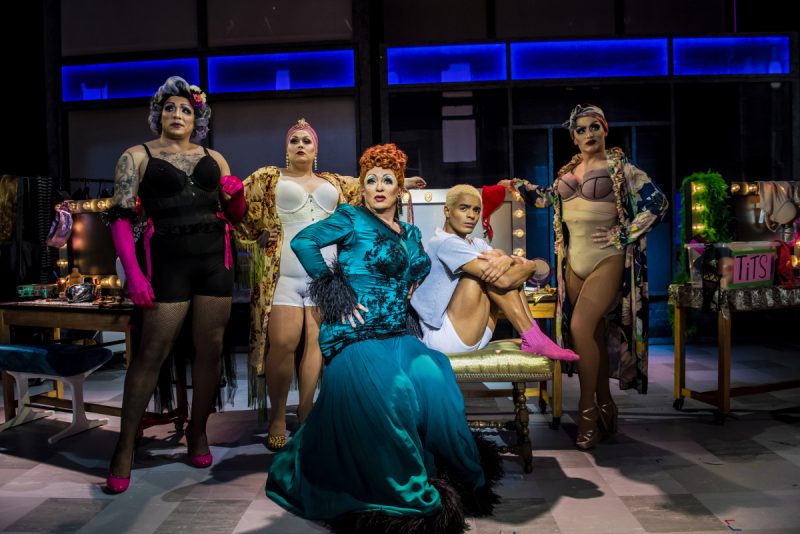 How important is the theme of inclusion to audiences both young and old?

Very important. I get messages from older people who have been helped by the show, whether it’s helped them come out or helped them understand their children better. It does obviously speak directly to the LGBTQ+ youth but it’s not limited to one faction. So many people can relate to being an outcast or feeling different but after seeing the show they’ll feel, to quote one of the songs, there’s a place where they belong. It didn’t happen to me personally but our director [Jonathan Butterell] said when he was doing the show in Sheffield a guy came up to him, grabbed his arm and said ‘I was Dean once’ – referring to the school bully character. Some people in the audience will maybe see the Dean character and think ‘That was me’ or they might see the dad and think ‘I was homophobic’ or they’ll go ‘Everybody is celebrating this boy here so why do I have these negative feelings?’ They might get dragged to the theatre by their girlfriends or wives, thinking ‘Oh my God, what have I gotten myself into?’ then hopefully by the end of it their hearts and minds will have been opened and their opinions on things have changed.

What challenges does the role of Jamie present?

It’s about the emotional journey he has to go on. Eight times a week I’m having an argument with this person, bonding with that one, having to cry about this, having to cry about that… The rollercoaster of emotions is a lot to navigate. Being 16 years old is hard. I remember being 16 with all those hormones and stuff. There’s the acting side of all that, then there are so many songs. I have to keep my voice tight and right. That’s the difficulty – keeping myself on top form all the time so when I get out on stage I slay it. I want people to have the best experience possible and that means I have to be in full health, make sure I’m rested and always prepared. That’s the nature of the job but that’s what makes it exciting because you put your whole self out there on stage.

Do you know the real Jamie and have you based your performance on him?

Yes, I know Jamie Campbell, he’s a really lovely guy. I rewatched the documentary once I got the part. There a few things he does, like a few little dance moves, that I’ve put into the show. And with him as a person, I take some of his isms and personality traits. On the surface he might come across as someone who is really confident and fab and out-there, but as with lots of people you don’t really know what’s going on behind closed doors. There’s so much vulnerability to him. That’s something I don’t necessarily have myself. I’m always getting notes from the director about tapping into Jamie’s vulnerability. I try to stay as true to him and his story as I can because I want to do it justice. I want everyone who comes to see the show to not just get this fierce, fully-formed teenager who’s got everything sorted because then it’d be like ‘So what’s this story about?’ If I came out in the opening number And You Don’t Even Know It like ‘Bam! I’ve got this!’ then the audience would just go ‘He seems fine, what’s the point of the story?’ 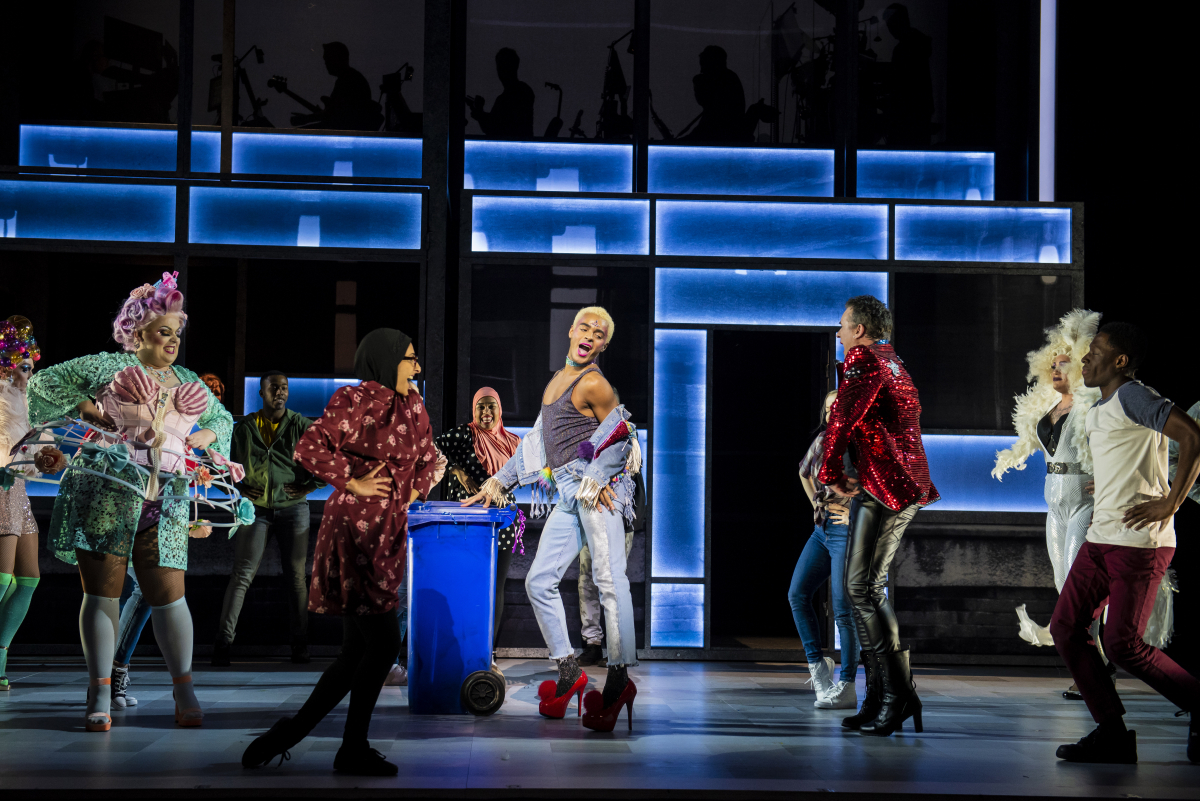 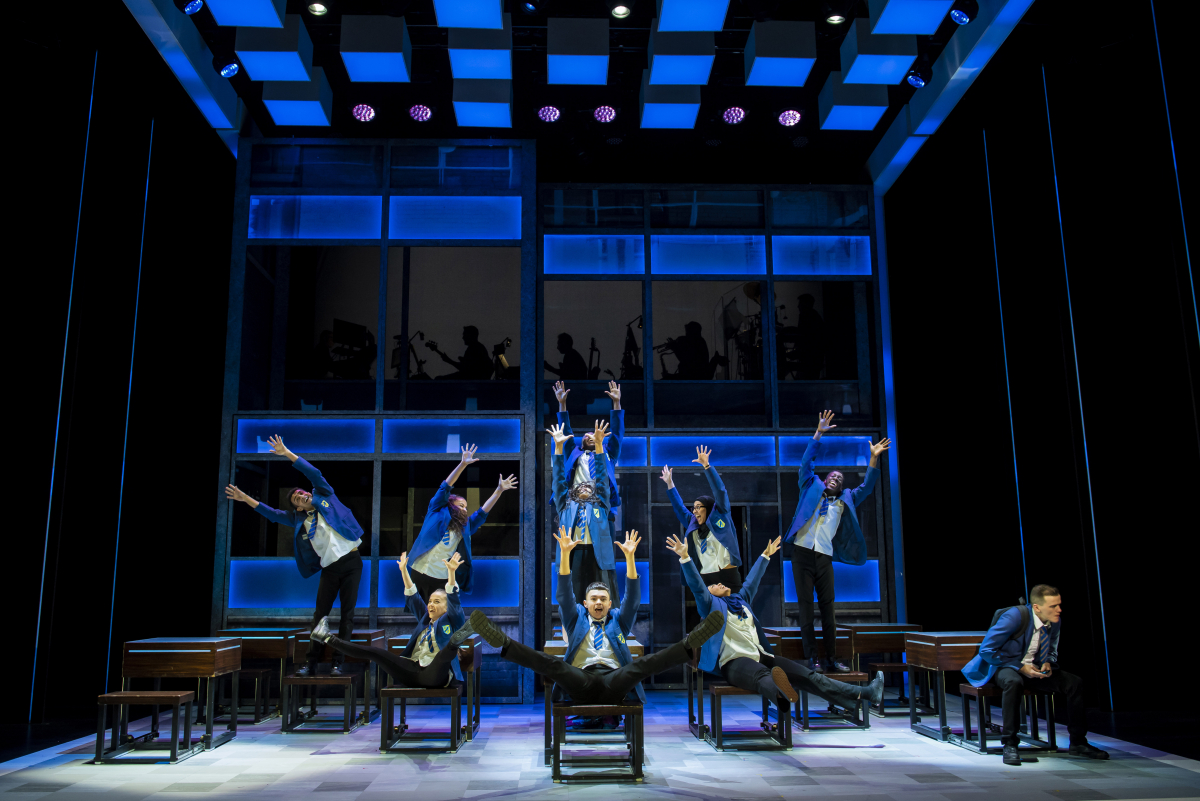 Does the show resonate for you on a personal level?

Yes it does. I’m a queer boy from a council estate up North, so we have that in common. Me and my mum have had our moments in the past and sometimes on stage I’m thinking about the things we’ve been through. We always patch things up but families go through stuff. And my upbringing wasn’t rosy. As I say, I was a gay boy on a council estate and as much as I tried to hide it I had a few things coming my way. It’s not been the easiest ride but I put it into my art.

What’s your favourite musical number in the show and why?

And You Don’t Even Know It is fab because it’s the opening number and I get to sing and dance and do it all. Then I love the closing number Out Of The Darkness because I have my microphone in my hand and I feel like a real popstar.

The tour was previously cut short by COVID-19. What are you most looking forward to about restarting it?

When the tour was cancelled it felt like the rug had been pulled from under our feet, so it feels like unfinished business and I can’t wait to get back out there and see everyone having a good time. I want to enjoy some consistency – knowing that I’m working hard and performing for people every day. It’s going to be so joyous, hopefully making people laugh and cry and just bringing some love back to live performance. It’s also about giving people the opportunity to see it who might not necessarily be able to because travelling to London is too expensive. When I was a musical-theatre-loving kid I couldn’t have afforded to get on a train and come to London. We’re bringing the show to a whole new audience and changing their opinions and perspectives and lives, hopefully.

How has the past year been for you with theatres being mostly closed?

I’ve been relatively busy, actually. There were moments where I didn’t do much and I had some chill time with family and friends, which was really nice because I never normally get to be still and do nothing. A friend of mine was like ‘Layton, just relax – we’re all in the same boat’ and when you realise that everyone else is also doing nothing it’s easier to just chill. But since thing began to reopen I’ve done the odd gig here and the odd concert there. I’ve also got a couple of TV shows under my belt. I did Murder, They Hope, which has already been on, and The Cleaner, which should be on later this year. It’s written by and stars Greg Davies as a crime scene cleaner. It was so fab to step on  a TV set again. I was nervous at first but then I was like ‘I’m in my element and I can do this’. 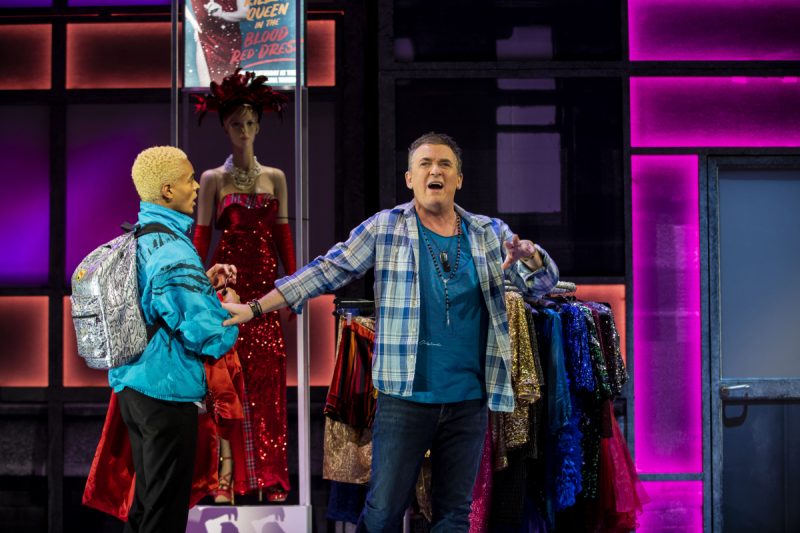 Is there one thing you couldn’t be on the road without?

My suitcases full of outfits and things for my dressing room, like my dolls and cards full of love and my artwork. I have to put them all out so when I come into the room I feel the love and the energy.

How hard do you think it will be to say goodbye to Jamie when the tour ends?

I can’t even think about it to be honest. I’ll have been playing this part for a good year and a half and I’ve loved every single second of it. All good things have to come to an end and I’m sure there are many more amazing opportunities waiting for me in the future but this will be something I will never forget. It’s been a life-changing job.

The tour calls at Curve, Leicester. Does it have any significance for you?

I love Curve. It’s such a great auditorium and Rent was a Curve Theatre production so it has a special place in my heart.

Jamie New is sixteen and lives on a council estate in Sheffield.

Jamie doesn’t quite fit in.
Jamie is terrified about the future.
Jamie is going to be a sensation.

Supported by his brilliant loving mum and surrounded by his friends, Jamie overcomes prejudice, beats the bullies and steps out of the darkness, into the spotlight. With catchy songs by lead singer-songwriter of The Feeling, Dan Gillespie Sells, and book and lyrics by writer Tom MacRae, this funny, fabulous, feel-good, musical sensation has been wowing audiences and critics alike. Sixteen: the edge of possibility. Time to make your dreams come true.