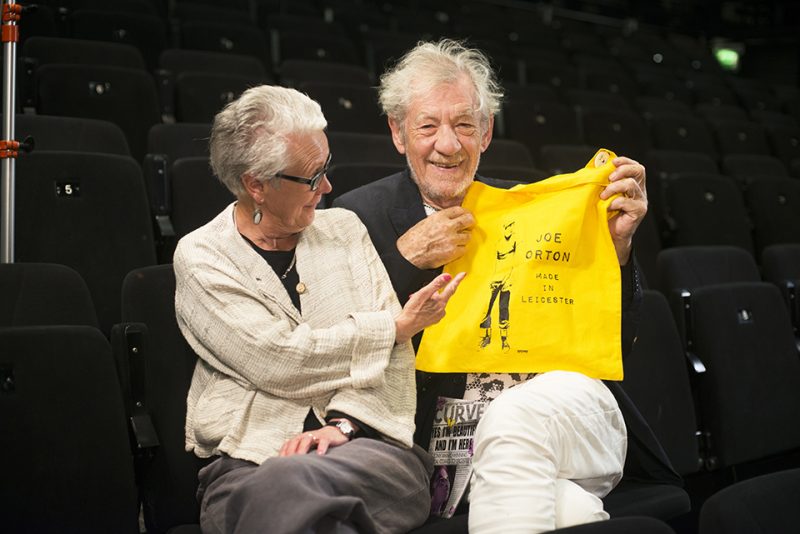 A host of celebrities including Sir Ian McKellen, Stephen Fry, Alec Baldwin, Kenneth Cranham and Sheila Hancock are lending their support to a fundraising campaign to have a statue of the iconic British playwright Joe Orton erected in his hometown of Leicester.

The fundraising campaign, Joe Orton Statue Appeal has been organised by a committee of Orton fans in Leicester and is headed by his sister, Leonie Orton (pictured with Sir Ian McKellen) and Dr Emma Parker, a leading Orton expert at the University of Leicester, home of the Orton archive, which includes manuscripts, letters and other original material written, compiled or collected by the playwright.

Leonie Orton, who administers the estate of Joe Orton with her sister Marilyn, said:

“A statue of Joe will ensure that a great writer is not forgotten, raise awareness of Leicester’s rich literary heritage and serve as an inspirational reminder that talent is everywhere and art is for everyone, regardless of social background or circumstance.”

Born in Leicester and raised on the Saffron Lane council estate, Orton shocked, outraged, and amused audiences with his scandalous black comedies such as Loot, Entertaining Mr Sloane and What the Butler Saw.  His career, although short lived, was incredibly significant, influencing future generations of writers, so much so that his unique style has given rise to the adjective ‘Ortonesque’ to describe work that blends the comic and the macabre. His life, as revealed in his diaries, was as scandalous as his plays, and he died tragically at the age of 34, murdered by his lover, Kenneth Halliwell, in 1967.

“’The idea that in Orton Square there should be a statue, a memorial to Joe Orton, is terrific”.

One of only a handful of memorials to LGBT icons in the UK, a fundraising platform has been set up to meet the projected cost of £100,000 to design, create and site the statue within a prominent position in the city of Leicester.

“’Joe Orton has always been a hero to me, both in his work and in the authenticity, wit and wonder of his life. A statue is a wonderful idea”

The design of the statue will be subject to a competition where artists will be asked to represent a likeness of Orton in a suitably ‘Ortonesque’ way. It is hoped that the statue, the favoured location of which is Orton Square by Curve, at the heart of the Cultural Quarter, will become a symbol of Leicester’s significant literary heritage and passionate commitment to diversity and inclusivity.

The fundraising campaign is supported by the University of Leicester, Leicester City Council, Curve, Fraser Urquhart Media and Big Difference Company. Donations can be made at www.spacehive.com/joe-orton-statue-appeal