INTERVIEW: Return of the Mac 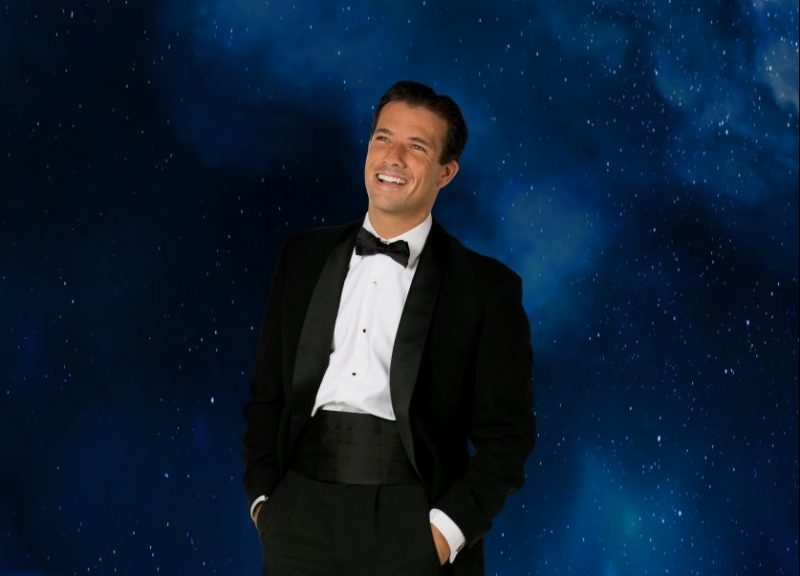 In a fit of festive escapism, Curve theatre are turning up the nostalgia dials to overload this Christmas, reuniting old acquaintances and welcoming some new ones in from the cold with their production of Irving Berlin’s White Christmas.

Top of the tree is ex Hollyoaks heart throb and Strictly Come Dancing dish Danny Mac. We caught up with him to find out if he’s really Dreaming of a White Christmas.

Sorry I’m a little out of breath, I’ve just finished a class in the gym,

What class were you doing?

Insanity, you have to be a little insane to do it but the good thing about it is it’s only half an hour so, you can burst it out. I mean it’s pretty intense for half an hour but its handy when you’ve not got much time you can just get it done and get out.

You’ll have to find a class in Leicester; you’re becoming a bit of a local now; this is your third production with Curve isn’t it?

I know it’s been years. It’s mad because there were a few options on the table and I’m in such a fortunate position that things do crop up, but this show was one of those things hovering about, and the thing is with Curve is that it’s such a fantastic theatre and I’ve never had anything but an excellent time there. And I don’t just mean in terms of fun and
stuff, it’s just the quality of work that they produce and the nature of that building.

It’s such a tough industry, the one we’re in, and it can be quite ruthless, quite horrible and you can do what seems to be the greatest jobs, but it turns out to be a nightmare because you’re not around the right people or around the right mindset.

But Curve has always been from the top down, from Chris Stafford the CEO and Nikolai Foster the Artistic Director all the way down through to the people that work on the bar and sell programmes, everyone is just lovely including the audiences that come.

If it had been a recast of White Christmas from last year or then I probably would’ve said no straight away but after the work, I’d done on Sunset Boulevard with Nikolai Foster (Artistic Director at Curve) the opportunity to work with him again on an all new production of a classic show was unmissable. 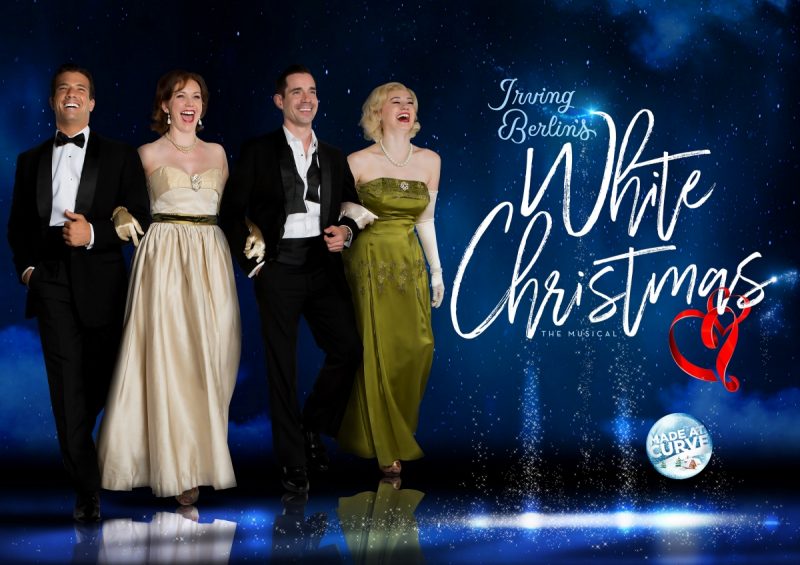 I think the strength of your performance in Sunset Boulevard surprised a lot of people, did playing Joe Gillis seem like a big development in your career and your confidence as a stage performer?

I think so. I went in with a different mentality. Legally Blonde at Curve was great, but it was my first show back in theatre when I honestly told myself I was never going to do a musical again. Not that I dislike musicals, but they bloody terrify me and singing just was scary!

I came out of college so confident and went straight into Wicked, the biggest show in London at the time and it was just a dream and then I got Hollyoaks and had this great time on TV, a crash course into drama and television which was so valuable for me. I didn’t sing for four years and didn’t intend on doing a musical again so when Nikolai came to me with Legally Blonde, I did it because I wasn’t doing anything else at the time in all honesty.

When on the Town came up, I had a few months to prepare so I just got on with my singing lessons. I took all the classes I could take in fact, you know, dancing as well just so I could get myself back up to scratch because you can’t go out there and lead a show, especially at somewhere like Regents Park, and blag it ! So, it was down to me to put the work in, and I did and that whole thing was a long journey, it was a big dance show which I was already a step ahead because of Strictly, which I was grateful for, but then it was about getting the vocal up to scratch.

When I agreed to do Sunset that was just a continuation of that. Even throughout that tour, my voice strengthened. From the way I started to the way I finished, it was like two different people. So that was great, I feel like I’m always improving, I’m still taking lessons, I have one in a couple
of hours in fact, you can’t stop in this game, I’m sure you know that.

None of us can take it for granted and just assume that there is going to be jobs there that one, you’re going to be offered and two that you can actually achieve.

Would you now say that the stage is where your heart is or are you still quite open?

I genuinely love filming. I did Trollied last year which was a great, a God send because I managed to squeeze in a week’s filming before I went into Sunset and it was that actually, I hadn’t done any filming for a couple of years and I had done theatre and I remember it does feel like home with filming and with television, so I really do want to do that.

Theatre will always be where my heart is though because it’s what made me want to be an actor, it was going into a theatre and watching live performance that really brought me in. Even if you made me do TV for the next ten years, I would cry out to do the right theatre piece and that’s
kind of all I want to do is, if I’m doing theatre I don’t just want to do theatre for the sake of it or just because it’s the only job on the table. 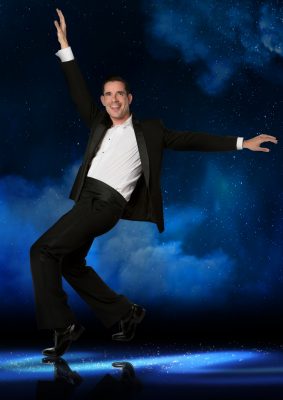 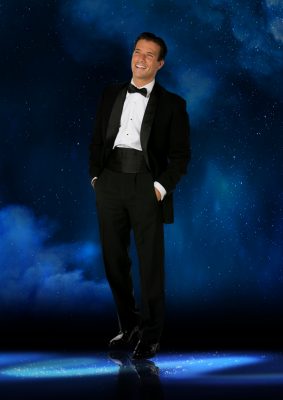 There’s a huge amount of stability isn’t there in being in a long-running show like Hollyoaks was it scary to give it up?

It wasn’t at the time that I left, I mean I stayed in a year longer than I ever
intended to, to be honest and it was that, it was the stability but also, I wanted to wait and get a good exit story and to you know plan that really. If I was going to leave when I wanted to, it would’ve been very quickly with like a month’s notice and then quickly, right now he’s gone. So,
I wanted to give them a real good story and have a good last year, which I did.

So, tell me about White Christmas. You’re playing Bob Wallis in the show and that means you’ve got the really big, Bing Crosby number.

Yeah pressure! The good thing is I get that pretty much out the way right at the beginning and then it kind of comes back in as a big number right at the end so there’s not like any huge build up to it. They come, and they get what they want straight away.

The show is an absolute classic, a big song and dance role which I haven’t really done before. ‘On The Town’ was very physical but there was only a couple of songs, whereas with White Christmas there are four or five proper big choreographed pieces that I’m involved in so much, much more.

And Stephen Mear is choreographing the show

Yes and he is superb. I’ve wanted to work with Steven since, well, just after I left Wicked I did an audition and he was there and I did the worst audition of my life! He says he doesn’t remember but it was so bad I just hated myself and moved on thinking I’m never doing that again,
don’t get me to sing me or dance, no more for me. It’s funny now he’s got me as one of his leading characters; hopefully I can redeem myself! in the next few months! 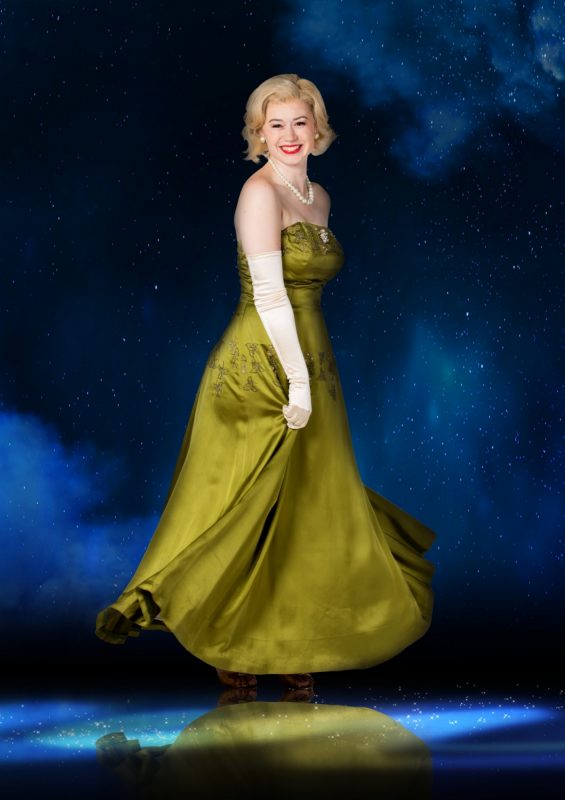 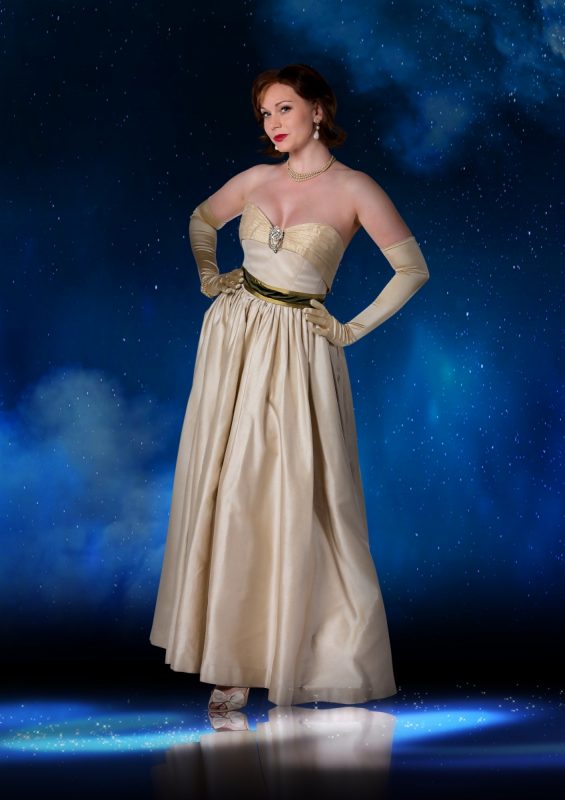 Have you started practising with your cardigan and your pipe?

Not yet! I daren’t ever try and make too many bold decisions before I meet
Nikolai because, he may want to do something completely different but I’m just starting to really dig into the script now and do some ground work. The script is beautiful, but I’ve never seen a production of it and I’m really trying to avoid the movie until I speak to Nikolai, he may want us to have a feel of it so that we have a feel of what people are expecting but at the same time I will have to make my own decisions first and then I’ll watch it afterwards.

I’ve seen some pictures of the set and it looks really, really grand, big and beautiful and I think it’s one of the most extravagant Christmas period shows that Curve has ever done. There’s some big old song and dance numbers and big dream-like sets that needs to be created that just appear out of nowhere. So we go from this festive cosy, intimate space expect at Christmas to these huge epic stages so it’s going to be quite exciting to see how he does it.

You’re going to be in Leicester for all of the festive period, are you planning on racing home Christmas Eve straight after the matinee?

I will be. I will be racing straight back down to the South Coast. I’ve got three siblings and all of us and our partners are spending it together this year- this is the year when we all come together as a family.

I’ll get back probably quite late Christmas Eve and then we’ll have the whole of Christmas Day and I’ll have to be up very early on Boxing Day to do a matinee on Boxing Day, I think.

So this year a White Christmas is the last thing you want really!

Yes, of course, Oh I never even gave that a thought! I’ll find a way I’m sure.

White Christmas runs at Curve until the 13th January. For more information and to buy tickets, visit www.curveonline.co.uk, or call 0116 242 3595