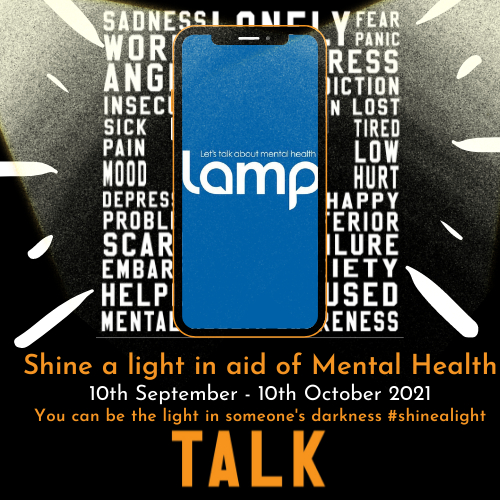 Between 10 September and 10 October 2021, people are being encouraged to light up someone’s phone with a message of support and positivity as part of Lamp’s new Shine a Light campaign.

Local mental health charity, Lamp (Leicestershire Action for Mental Health Project) is promoting the Shine a Light campaign to raise awareness of the importance of conversation for mental wellbeing and suicide prevention. The campaign launches on Friday 10 September to mark World Suicide Prevention Day and culminates in a Walk, Talk and Shine event from 7-8pm on Sunday 10 October at Victoria Park in Leicester to mark World Mental Health Day.

According to the World Health Organisation (2019) more than 700,000 people die by suicide every year, which is one person every 40 seconds. The Shine a Light campaign will encourage people to reach out to others and be the light in their darkness.

Sue Langley, Chief Executive of Lamp said: “Lamp’s Shine a Light campaign encourages people to message someone to whom they may not have spoken in a while, ask how they are and let them know that they are here to talk if they need to. This simple thing can make a big difference to someone struggling with their mental health.

“We’d also love as many people as possible to join us on the Walk, Talk and Shine event, to create a visible reminder of the power of talking.”

To find out more about the Shine a Light campaign and how to get involved, visit www.lampadvocacy.co.uk/shinealight