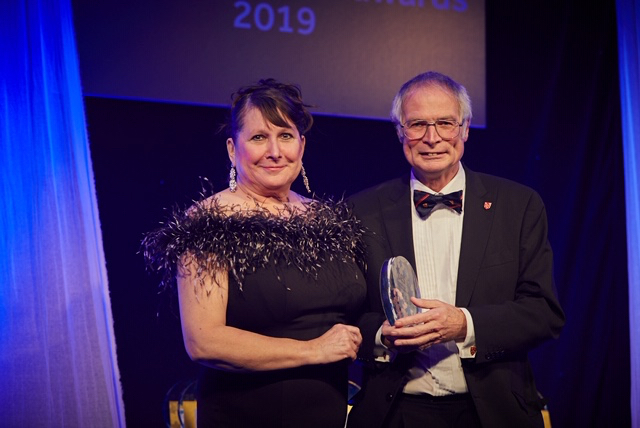 A teacher, who has served at Loughborough Grammar School for more than forty years, has been rewarded for his dedication at the prestigious Tes Independent School Awards 2019.

John Weitzel, who has worked in a number of roles at the school including as a teacher, deputy headmaster and archivist, was recognised with the special services to independent education award, at a black-tie event at the Grosvenor House Hotel, London.

Judges for the award highlighted John’s inspirational work as a maths teacher after he joined the School in 1978 making the subject exciting to learn and inspiring many of his pupils personally.

He was also praised for the six years he spent chairing the Quincentenary Committee celebrating the Grammar School’s 500th anniversary in 1995.  In the role, John raised more than £700,000 for a new English and Drama block and led preparations for a visit by the Queen to open the building.

Today the school’s Development Office and alumni association still rely on his passion and knowledge, and a dinner to honour his ‘retirement’ drew 174 people.

One of John’s most admired qualities is his ability to remember nearly every one of Loughborough Grammar Schools ‘Old Boys’ – including their academic aptitude, interests and parents.

Commenting on his pride at winning such a prestigious award, John said:

“It is a real honour to be recognised with this award which is testament to all the current pupils, ‘Old Boys’, and my colleagues over the last forty years. It has been a pleasure to spend my career at such an incredible school working with outstanding people.”

Judge John Claughton, who played cricket with Weitzel as a teenager, said:

“For 40 years John Weitzel has been a remarkable servant of Loughborough Grammar School, doing everything, knowing everyone, young and old and in the middle. Teachers like John create and embody the very essence of the schools they serve and there are few of them left to carry that collective memory.”

The awards were hosted by award-winning musical comedian, actor, improviser and presenter Rachel Parris, herself an Old Girl from Loughborough High School, where more than 400 attendees, including three LGS headmasters who John worked with, celebrated all that is outstanding in independent schools across the UK.