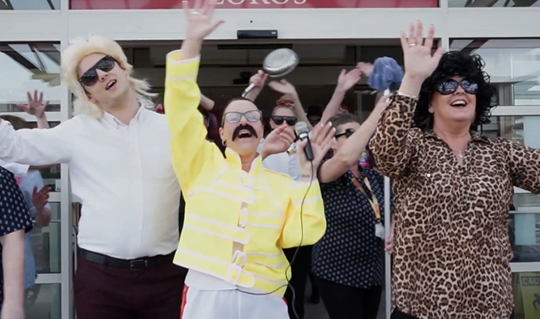 LOROS Hospice in Leicester’s lip synch video, which was unveiled earlier this week for Dying Matters Week, has taken social media by storm, reaching 80,000 views within just a few days.

Queen’s Don’t Stop Me Now was the number one choice of funeral song chosen by LOROS staff in a poll carried out for Dying Matters Week, the national awareness week to talk more openly about death, dying and bereavement.

The lip synch video, which is a key part of LOROS’ What’s Your Funeral Song campaign, has gone viral, with 80,000 views to date.

Jo Kavanagh, Director of Care at LOROS, said: “We’re absolutely delighted our video has struck such a chord with the general public.

“We had a huge amount of fun making it but there’s a serious point behind it – that people should talk about what they may want at the end of their lives, and how they would like to be remembered.

“What’s great is that everyone commenting on our video has agreed – we need to talk more about death. We really feel like we’re pushing at an open door on this and the support from the public shows there’s a real appetite to start the conversation about dying and bereavement.”

“We’d like to challenge other hospices to take up the mantle and make their own Funeral Song videos for the Dying Matters Week campaign.”

LOROS Hospice’s staff were asked what song they would like played at their own funerals. Rather than the traditional hymn or sorrowful ballad, the findings indicate people preferred an up-beat tune to celebrate their life.

LOROS’ poll showed that funeral songs are so unique to the individual that having the discussion about your funeral wishes is the only real way to get the song right for your loved one.

More information on LOROS Dying Matters Week activity can be found at Loros.co.uk