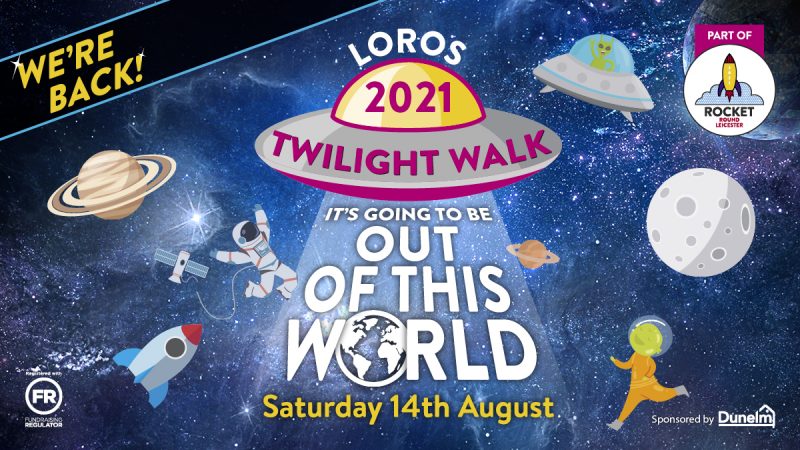 LOROS Hospice is pleased to announce that their Twilight Walk is returning this summer and with an ‘out of this world’ theme, the charity hopes that the launch of their event will see participant numbers rocket.

Participants can now get their hands on early bird tickets for this year’s 10km walk, which will be taking place on Saturday 14th August.

With participant wellbeing an absolute priority, the team at LOROS has confirmed that they are doing everything they can to ensure the event is both safe and fun.

“It’s been an unpredictable past year, but we cannot wait to finally welcome our supporters back at this year’s Twilight Walk,” said LOROS Fundraising Co-ordinator Lisa Wilson.

“It’s fair to say that the last 12 months have been challenging for everyone, I think we could all do with an excuse to get something in the diary to look forward to – and what better than a fun walk that raises money for a good cause?

“Of course, we can’t forget that we have just faced a pandemic and with that in mind, we have adapted this year’s event to ensure participants feel as safe as possible.”

The event will include staggered starts, every half-an-hour, from 5pm and there will be entertainment along the route, rather than all in one place, to avoid over-crowding.

This year, the event will start and finish at De Montfort University, with the route featuring some of the rockets from LOROS’ Rocket Round Leicester trail, which will also be taking place later this year.

In keeping with the charity’s ‘out of this world’ theme, participants are encouraged to dress up in a space-related costume.

“While we hope as many people join us on the night as possible, we understand that some people might not feel comfortable taking part in the event itself, so we are also giving our supporters the option to take part in their own Twilight 10km, wherever they want, whenever they want,” added Lisa.

“However they choose to get involved, there’s no doubt in our minds that that our fundraising family will do all they can to support us. The COVID-19 pandemic has hit LOROS really hard, it’s more important than ever that people get behind us as we try to come back from such a devastating year.”

LOROS is challenging all participants to aim to raise at least £50 for the Hospice this year, which will pay for two hours of care for an inpatient.

Early bird tickets for the event, which is being sponsored by Dunelm, can be bought at the bargain price of just £10 up until 31st May, at which point they will increase in cost.

For more information on the event or to sign up visit loros.co.uk/twilight