M&S FOOD DONATES £10,000 TO LEICESTER CHARITY HELP THE HOMELESS TO PROVIDE FOOD PARCELS TO THOSE IN NEED THIS CHRISTMAS 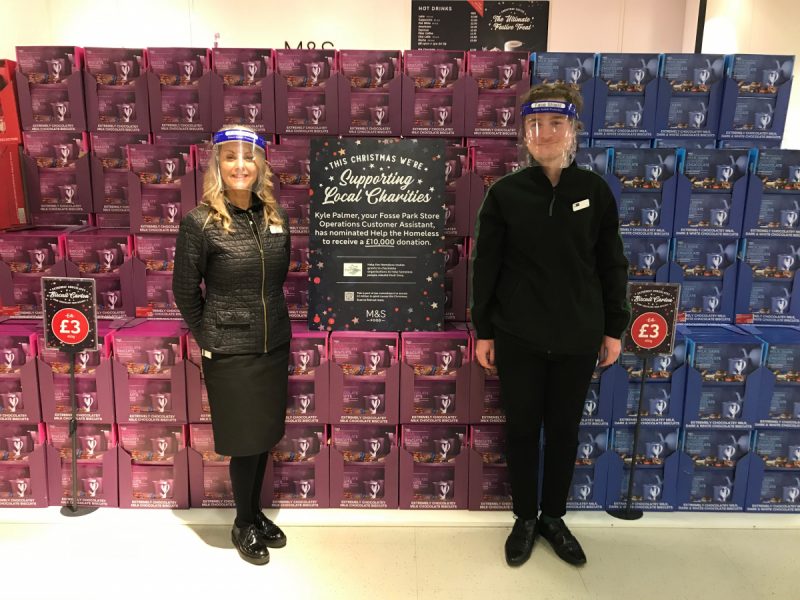 This Christmas, M&S Food is putting charity firmly at its heart. In a year when charity funding has declined almost 25%, M&S Food is proud to donate £10,000 to Leicester based charity Help the Homeless in recognition of the volunteering efforts of local colleague Kyle Palmer as part of an overall £2million donation to good causes for its very special Christmas campaign. A sign at the front of the store was unveiled on 3rd December, highlighting Kyle and Help the Homeless Leicester’s brilliant work to all customers shopping at M&S Fosse Park this Christmas.

The good causes have been chosen by nine world-famous actors including Dame Helen Mirren, Dame Julie Walters, Oliva Colman and Tom Hardy, who have added their unmistakable voices to nine brand new Christmas Food adverts. They have also been selected by 10 M&S colleagues from across the UK, who have been recognised as the retailer’s most active charity volunteers. Donations of £10,000 are going towards each of the colleagues’ chosen charities.

Kyle Palmer, Customer Assistant at M&S Fosse Park, has been chosen by M&S Food for his dedication to Help the Homeless Leicester and the £10,000 donation has gone towards providing food parcels to people in Leicester shielding or self-isolating during the pandemic. The donation will also help the charity source new accommodation for homeless people and reduce the amount of homeless people living on the streets. Over the last two years, the charity has helped 120 homeless people across Leicester find a new home. Kyle has previously worked closely with Help the Homeless Leicester, volunteering during the festive season to provide food parcels and gloves to keep homeless people fed and warm over Christmas. More recently, as part of his volunteering work, Kyle spent a night sleeping on the streets in Leicester to get a true feeling of how difficult the conditions are for homeless people in the city.