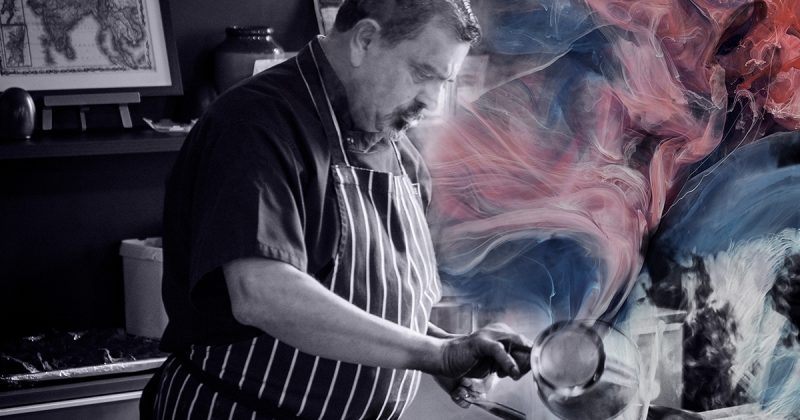 Leicester’s most anticipated Indian restaurant and cocktail bar, Tandem is set to arrive at Highcross next month and a familiar face is behind the launch.

Award-winning chef Cyrus Todiwala has chosen the Midlands for his venture outside of London adding to his vast portfolio of dining venues including the renowned Café Spice Namasté. He is working in collaboration with Raphael Hospitality to bring the tantalising Tandem to the city.

Following the reveal, Dluxe Magazine’s Francesca Arculeo sat downwith the star of The Incredible Spice Men to find out more about what diners can expect and why he chose Leicester as the destination.

Tell us about Tandem, where did the inspiration come from? What can diners expect?

The word tandem itself stands for something working with something, so it is a great name to have for a restaurant in the sense that it brings cultures, people and cuisine together. It’s working with something in a harmonious situation to create something better for the people that come to dine in that establishment and that is how we are going to be looking at it, from that perspective. So, the word tandem is going to be utilised in more ways than one, for example, Raphael is working in tandem with Cyrus Todiwala.

But more than that, what we represent is Britain. Keeping India and the continent of Asia out of the equation, it’s Britain and what Britain has to provide that can be converted into a cuisine that is representative of the sub-continent of India but presented to people with a very discerning palette in its simplistic form

It’s what we have always been known for at Café Spice Namaste, bringing the best of British into its kitchens and creating a cuisine that is not just acceptable to the British public but also to the Asian public.

This is your first restaurant outside of the capital, why have you chosen Leicester?

Leicester is a hub that has had an Asian influence for a very long time and that means that the people of Leicester from all denominations will have a palette for more exotic flavours and that is why it makes it a perfect destination.

A lot of people would say why did you not  choose Manchester or Birmingham but they are already big, bustling cities. I’m not saying Leicester isn’t bustling but it’s not as vast, yet at the same time it’s got a niche population that can access all these places within an hours drive from one place to another. So, it is a destination that can attract people from those destinations too, from Nottingham or from Birmingham  for example.

You are saying you are going to change the culinary scene of Leicester, Do you think the people of Leicester are ready?

You don’t come to change anything, you come to create a different kind of a feeling. We are not a revolutionary but what we are is adding value to something else and the people of Leicester, why wouldn’t they be ready?! They travel far and wide to enjoy food in different parts of the country already, so why not come to their own city and enjoy something different.

They will be ready; the British public today has the most discerning palette in the world. The British are travelling far and wide and they come back with so many flavour profiles on their palettes already, so they are ready. 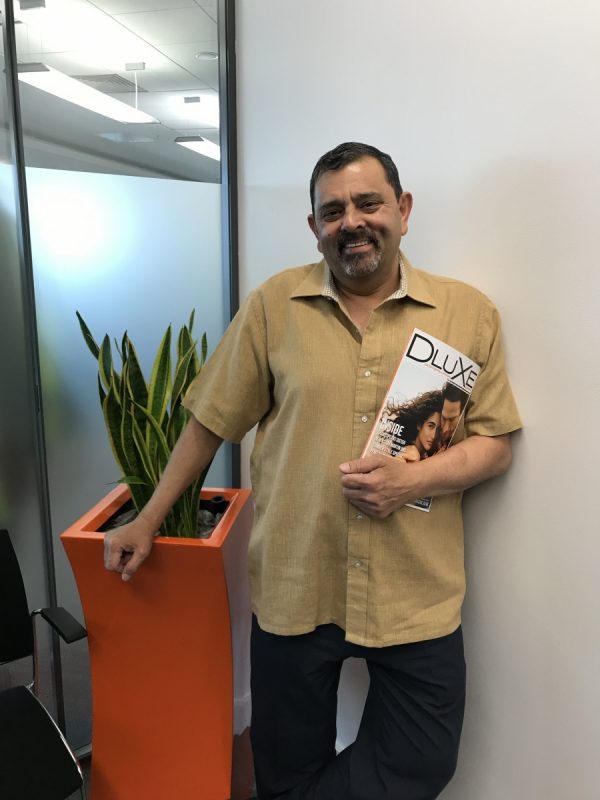 Tandem is described as a multi-sensory feast, how are you going to achieve this?

When you have a sensory theme or when you say you are going to create a sensory feeling, in people’s minds when the menu’s come out, it will create a sensory perception because that food will not be easily recognisable from the average offering that there is. I’m not saying average in terms of quality, I’m saying average in terms of commonality, people will at first find it difficult to try and compare, and that is not what we want. We don’t want people to compare, we want them to feel like they are coming to a different place and a different destination.

Every restaurant has its own following, there have been a lot of famous restaurants here that have been going on for years that have a very strong solid following and we hope that Tandem will gather up that as well.

Can you give us a little insight into what we can expect to see on the menu?

On the ground floor where you walk in straight from Highcross, we are going to have an all-day grazing menu. So, it’s going it’s going to be small plates, it’s going to be sharing plates, it’s going to be for those walking in after shopping, wanting a light bite before they go home or friends meeting up for a cup of coffee and a few snacks and they don’t want to have a full meal. This is already being experimented in London at the moment and it is very, very successful so we think to bring it here is going to really work.  Whether you’re a vegan, a vegetarian or a hard core meat eater, there is is going to be everything there for them to experience and eat from.

At the same time, there will be a varied menu bringing together all the influences India has experienced. The cultural influence that has come in from the Mongols, to the Persians, to the Turks, to the Portuguese, to the French, the Dutch, the English in all those cultures we have to bring those out again and use them as a benefit rather than something you want to forget about in history.

On the first floor it’s a little bit more of a prescribed dining area. Fine dining is a term that is very difficult to determine, but it is going to be food that is more serious, in that sense. But at the same time, in an atmosphere that is conclusive to wanting to enjoy a meal over a decent period of time. We don’t want to throw people out of the restaurant, when restaurants get busy, they give you a time and they make you choke on your food and in London they throw the bill on your table it is very rude. But here we hope that people have a nice, leisurely dining experience, good food, good wine, good service and great ambience.

And it’ll be accessible to everybody?

Yes, that is exactly what we want

Our cliental will determine how we finally mould the menu, whether the ground floor attracts a younger generation, then the younger crowd will demand what they want more of. Gins are the in thing at the moment for example, and then funky cocktails but the mixers are going out of fashion now, they are being phased out and new things are coming in.

I think that if you are very clever, mixologists they will know what the crowd want, and they will please the crowd accordingly and that’s what we are aiming for.

you also work a lot within education and training and getting young people into the industry, will you be involving that here in the Midlands?

Colleges have suddenly come to know that I will be working in the area, so a couple have already contacted me with interest.

Our ambition was always to open an academy with the restaurant but we want to make it unique, what we want is to take people who don’t have anything else and give them training so that we can try and get them out of trouble but we said one step at a time. Let’s open the restaurant first, then organise the academy.

The whole idea was to introduce something in Leicester that we have been trying to achieve for a very long time in London because it is easier to achieve here.

The whole idea is to encourage, we have launched a competition that is totally geared towards encouraging young British budding chefs to look at Asian cuisine as a career. Our success will come when you see diversity  in our kitchens, front of house is okay but, in the kitchens, and that’s when the achievement will come, when we see that young girls are coming in to learn the profession. That’s the biggest challenge that the whole industry has as a whole, is to attract young female talent to work in mixed kitchens and I think it’ll gradually take its ship, it’ll happen on its own but we will not stop it, we will encourage it.

It’ll be really interesting to see how it progresses and what you discover here in the midlands.

Training and development is the key. The education department or the government bodies have failed to recognise this industry as one of the primary employees of Britain. It is the second largest employer in Britain, and it is the only industry where you do not have to have a high academic qualification to become massively successful. It is the only industry that allows you to fail in school and succeed at work. Other industries do not, they look at you academically and put you into a box, this one doesn’t do that, every individual is free to access their own potential and grow within it. That’s what makes this industry so unique and we have to give that impression out.

We like that very much. If you look at some of the top creators in this country today from the large organisations, they just have O levels just GCSE’s and some of them  become CEO’s of large corporations in hospitality.

So, another hot topic of the moment is the environment and being environmentally friendly and sustainable, I know that you use those within your restaurants.

Yes, I know that whether we like it or not there will be a gun pointing at our heads in that direction. Café Spice Namaste is voted Britain’s most ethical sourcing business and if that fails over here then we fail.

Those things will be very important. We are putting things in place that no restaurant actually invests in like we have oil separators from the drains, no restaurants do that. And that is a very expensive installation, we have de-carbonising tanks which rather than using heavy duty chemicals, these are enzymes that are made from seaweed that de-carbonise and the enzymes digest carbon from filters and grease. When you deposit that back into the drain, that should end up cleaning the drain as well.

Being environmentally friendly is cost beneficial in the long run, they are not cost efficient in the short term, but they reap benefits two or three years down the line when you are actually benefiting the environment, rather than just benefiting yourself as well.

So yes, in terms of sourcing and how we procure that’s already taken care of because what Tandem will be serving, 80 or 90% of all the meat served will be rare breed. The whole idea is to protect Britain’s diversity and to make sure there are native species of animals, native vegetables, native fruits that are accessed in the right manner and presented to the people. We will not only be buying Asian vegetables; we will be using British vegetables in season for example on the menus which most Asian restaurants will not do because they feel the public will not eat it.

Being ethical is part of our policy, being sustainable is very much within the mould itself and trying to create as little an impact as possible on the environment is what we hope we can achieve.

FIND OUT MORE AT TANDEMRESTAURANT.CO.UK