Winner of The Harley Prize has been revealed as the painter Jéréme Crow with his piece ‘Dom with Indian Yellow’. Jéréme can now look forward to staging his work in a solo show at the gallery in 2019.

He said: “This is incredible news, I am absolutely thrilled to have my painting recognised in this way by the judges and especially considering all the other exceptional works in the exhibition. I had been eagerly looking forward to entering the Harley biennial open for some time and to be selected to have my painting on display within only yards of The Portland Collection and works by some of the greatest painters from the history of art is the greatest award.”

Describing his work, he said: “I am concerned with the techniques and craftsmanship of familiar paintings and how the secondary image reproduced in print or digital media omits the artists’ labour. By translating these images into paint I am able to explore the original artists’ creation to develop an intimate relationship with their painting process.” 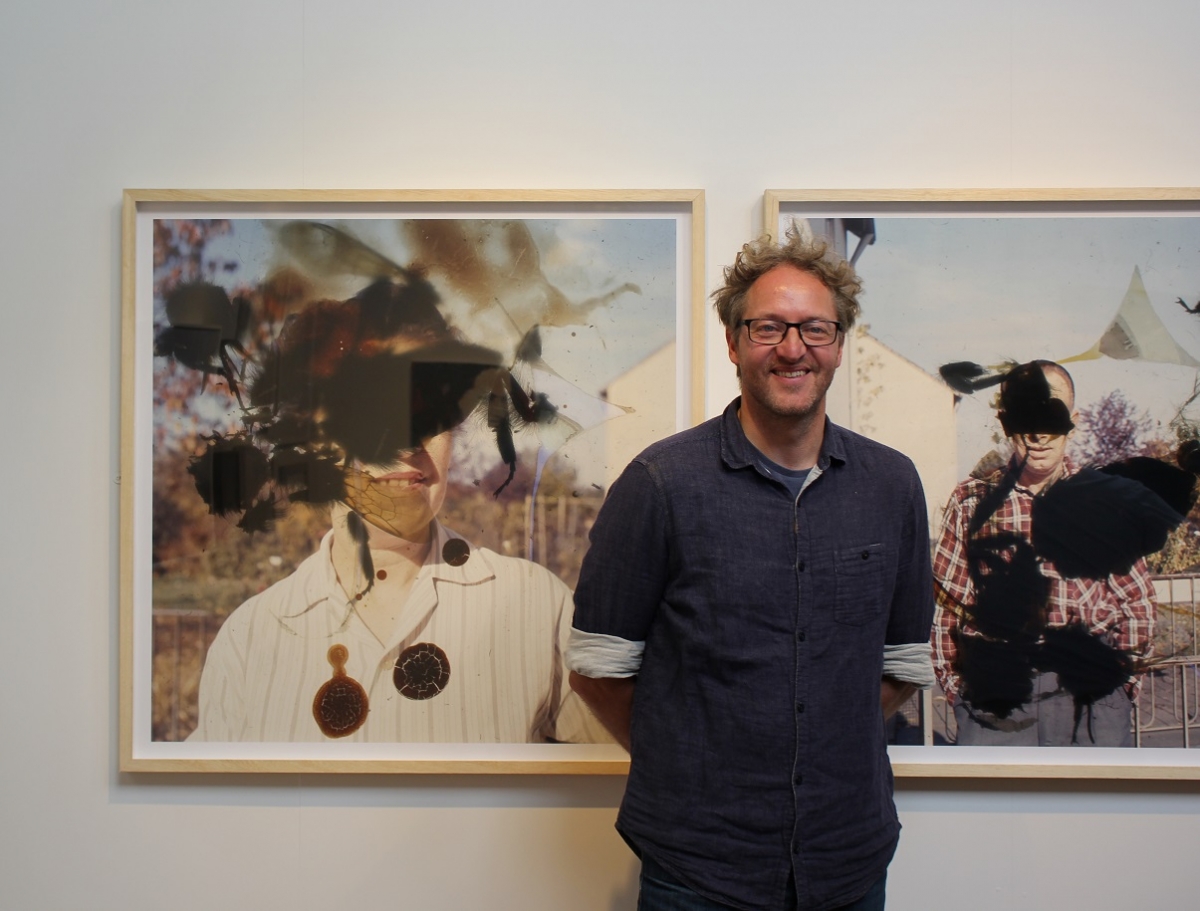 Winner of The Storycatchers Prize, Clay Smith, alongside his work 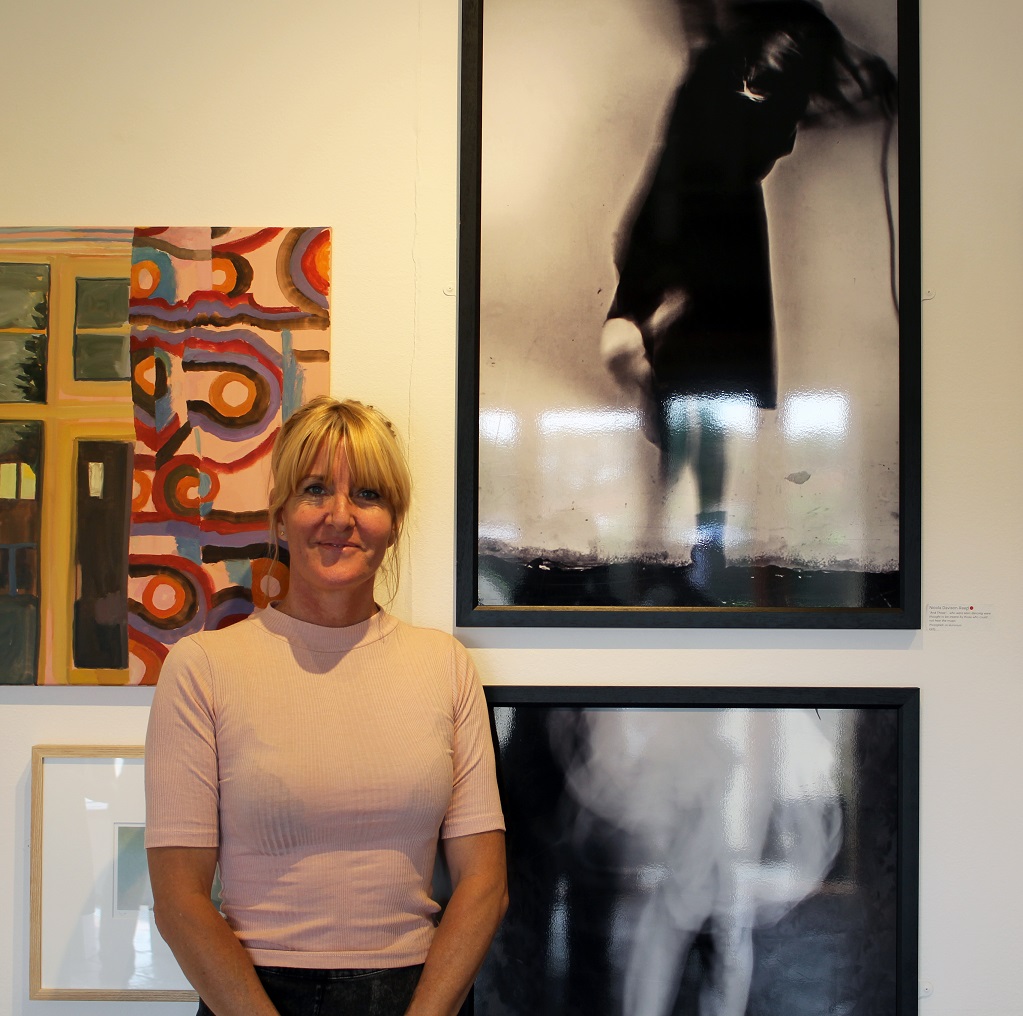 Winner of The School of Artisan Food prize, Nicola Davison-Reed, with her work

Winner of the Judge’s Commendation, Holger Martin, alongside his work 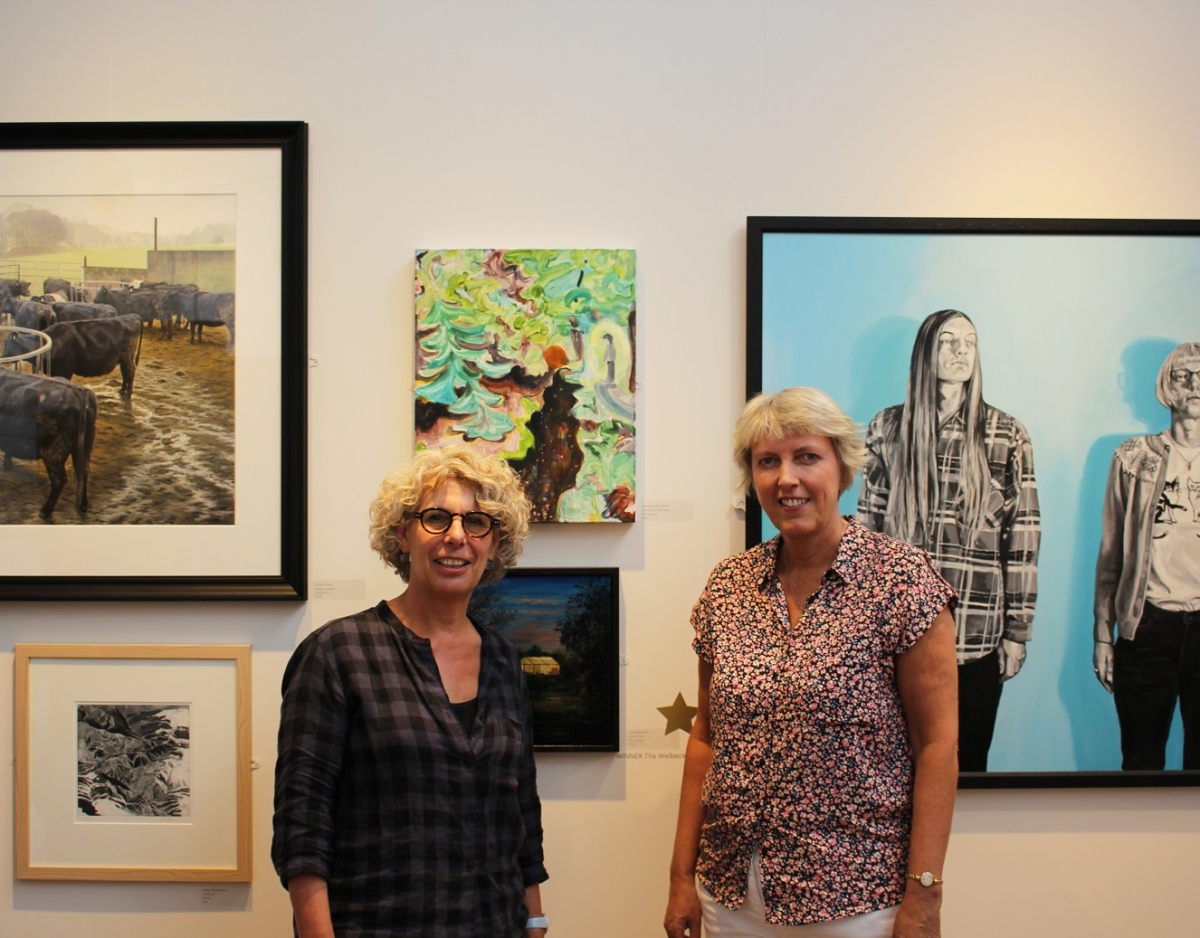 Winner of the Welbeck Farm Shop Prize Lois Wallace, and her work, with Lisa Gee 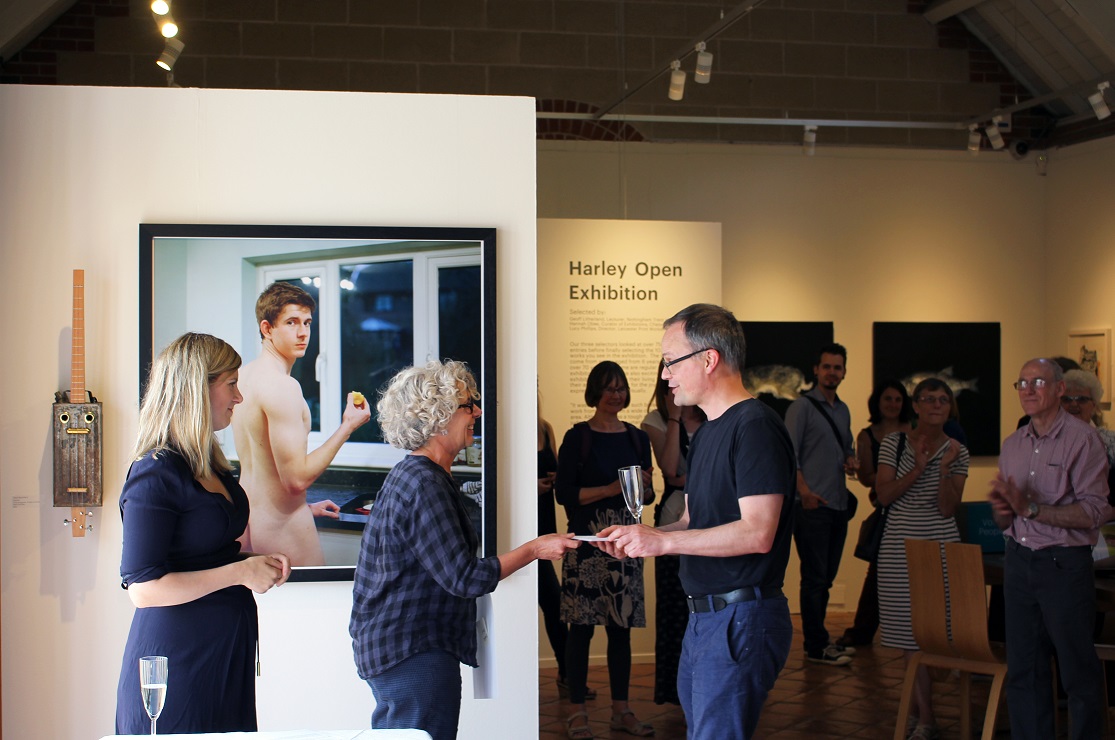 Winner of the Judge’s Prize is Emma Fineman with her painting ‘R.R Woman’. Emma was born in 1991 in Berkeley, California and is currently living and working in London, where she is on the Master in Arts Degree Course in Painting at the Royal College of Art.

Describing her work, she said: “My paintings are not meant to serve as depictions of something witnessed in real time, but rather of a moment felt and remembered. My aim is to draw comparative reference from elements of historical traditions within the realm of painting and portraiture. I believe this evocation of the past functions to form a dialogue across generations of art making, which I feel bear significant weight and influence on the contemporary.”

Director of The Harley Gallery, Lisa Gee said:
“It’s been great to see so many artists putting work forward for the first time. The selectors had such a varied body of works to choose from, and they’ve come up with a fine mix of the traditional and the contemporary.  I think it’s really interesting that both the Judges’ and the Harley prizes have been awarded to portrait painters. Seen alongside the historic portraits in The Portland Collection they really do offer food for thought in the way one might go about painting the human form in the 21st century.”

Holger Martin (Nottingham), who received a Judges’ Commendation for his photograph, Main Pool, taken at the now demolished Beechdale Baths in Nottingham, said:

“Being part of the Harley Open provides fantastic exposure for my work to a large audience visiting the gallery, especially as the Open combines with the permanent exhibition and the inspiring work by last time winner Olivier Leger. What I really like about open exhibitions is the way they bring together work made in different media, allowing viewers to compare and contrast how subject matters are tackled. Having received a Judges’ Commendation this year is the icing on the cake.”

Nicola Davison-Reed, a photographer working from a natural light studio in Tuxford,  Nottinghamshire, was awarded The School of Artisan Food Prize for her photographic piece #TheDance.

The Commendation from The School of Artisan Food went to Isabelle Priest, of north Lincolnshire, for her photograph entitled ‘Reflections’.

Staffordshire based Lois Wallace, winner of the Welbeck Farm Shop Prize with her painting ‘Secret Place’, is a contemporary painter who trained at the Slade School of Art. She has exhibited in Berlin, Brussels, New York, Spain, London and many other cities. Her work is in public and private collections in the U.K. Europe and New Zealand.

She said: “It is great to be involved in the open exhibition in such a nice venue. There is a diverse range of work, and it is especially pleasing to be a prize-winner.”

“I knew that The Harley Gallery had a great reputation, but had never put forward a submission to any Open before. It was by recommendation that I decided to submit work this year, and was thrilled to win a prize! It was a real pleasure to be part of the Harley Gallery, and to then win the Storycatchers Prize and receive a certificate was a great surprise!”

Talking about his work, Clay said: “I tend to use images that have some emptiness within them, only to place or misplace another image within it. I like the connection of how two or three different images can work and adjust themselves when placed within the same frame.”

A petrol can, pinpricks and gold are some of the more unusual materials featured alongside oils, acrylics, watercolours and photographs in the explosion of artistic talent unearthed by The Harley Gallery’s popular biennial art competition.

Judges selected the best 103 pieces from more than 750 entries received by the gallery on the Welbeck Estate, near Worksop to go on display in the Harley Open exhibition running until 20 August 2017.

Now the main prizewinners have been revealed with the artists presented with their awards at a reception held at the Harley Gallery on Saturday 8 July.

As well as the chance to see the prize winning work, visitors can also nominate their favourite piece for The ‘People’s Prize’ of £250 sponsored by Child First at Welbeck to be announced at the end of the exhibition.

With works from artists based in Nottingham, Leicester, Derby, Chesterfield, Sheffield, Mansfield, Lincoln, Matlock and Worksop (see full list of entries from each area here) and the surrounding counties, the exhibition is a showcase of the wealth of artistic talent to be found across in the East Midlands and Yorkshire. From paintings in oils and watercolours through to abstract photographs and screenprints, etchings and linocuts, the show is full of delightful surprises.

Hannah Obee, exhibitions curator at Chatsworth, Geoff Diego Litherland, artist and Lucy Phillips, director at Leicester Print Studio had the task of selecting the best pieces to go on show from a vast variety of styles and mediums submitted by both established artists and others who have never exhibited before.

Hannah Obee, Chatsworth, said: “Working with The Harley never fails to disappoint and being part of the selection panel for The Harley Open was another inspiring day. With 80 percent of submissions coming from within a 50 mile radius, it proves once again the extraordinary talent to be found in the north. It also demonstrates the important focus provided for the region by The Harley and with Earth & Fire relocating there this summer, this only looks set to grow.”

Also running alongside the Harley Open is a solo show from the 2015 Judges’ Prize and People’s Prize Winner, Olivier Marc Thomas Leger. Whale Wails and Waves is set to be one of the biggest and best solo shows to date by the Loughborough based artist, whose playful work is made using fine liner pens with the animals imagined as living planets with their own landscapes and ecosystems.

He said: “Winning the Harley Open helped me raise my profile with a wider audience. The Harley Gallery audience are well engaged, so it’s an amazing opportunity for me to have an exhibition here.”