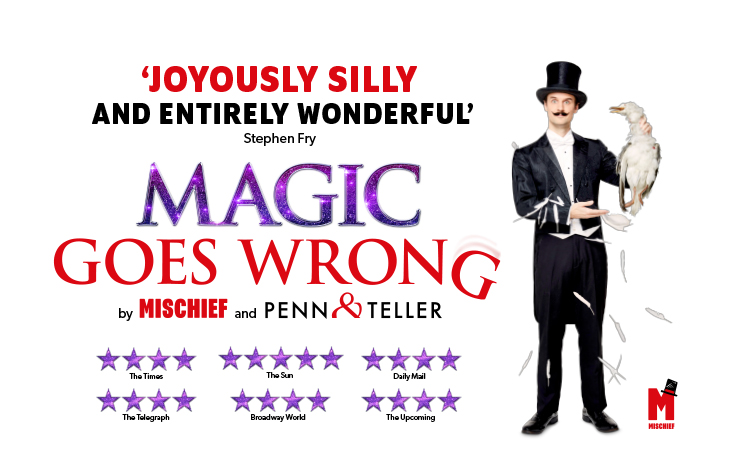 Our first proper visit back to the theatre was a welcome new outing from one of our favourite theatre companies- Mischief Theatre- well known for their hilarious misadventures on stage The Play That Goes Wrong and Peter Pan Goes Wrong.

Magic Goes Wrong has been created in collaboration with the legends of the magic world that are Penn and Teller and is an all new show rather than a show based on a show like Mischief’s previous works- both amateur productions of well known classics- and, as enjoyable as the Magic Goes Wrong was, I think it was that lack of strong narrative that held the show back- that and the fact that nothing went as spectacularly wrong as we’d hoped and expected.

It’s perhaps a sign of Penn and Teller’s involvement that a lot of the magic went right- admittedly in a roundabout way. But there was no moment of complete, ridiculously spectacular going wrongness and the problem was that was what I was sat waiting for.

There are some very funny moments, believe me but other Mischief shows have literally left me crying with laughter. Sadly with Magic Goes Wrong many of the jokes either don’t land or go on much longer than the initial gentle chortles would suggest wise.

Enjoyable as it was, Magic Goes Wrong feels like a show that needs substantial tightening up to allow those moments that truly do work to really shine through. Highlights include a take on the traditional doves routine and cutting a woman in half goes as wrong as it possibly could. The trouble is much more needs to go wrong for this show to truly satisfy although, setting a Bear free in Leicester city centre isn’t a bad start…

After months of lockdown though it was so lovely to be back out in theatreland and this gentle romp is an easy and enjoyable way to get back into the swing of things.

MAGIC GOES WRONG Is heAding out On ITS INAUGURAL UK TOUR THIS SUMMER, it runs  AT CURVE LEICESTER Until 24th JULY 2021.