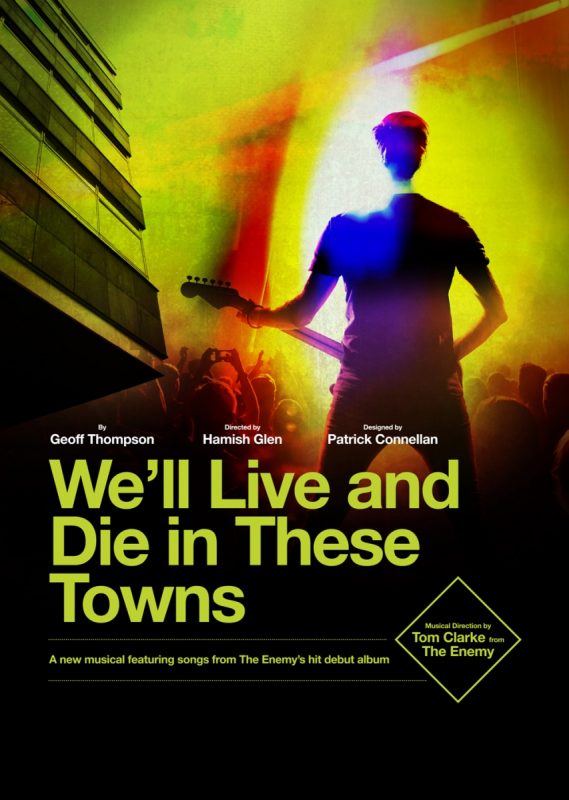 With a brand new season now underway, Coventry’s Belgrade Theatre continues to celebrate its 60th anniversary year in style, serving up a diverse mix of dance and drama, as well as the world premiere of its gritty new musical, We’ll Live and Die in These Towns.

Bringing the songs of The Enemy’s number one debut album to the stage, We’ll Live and Die in These Towns sees the Coventry band’s former frontman Tom Clarke make his first foray into theatre as musical director. Written by acclaimed local playwright Geoff Thompson, it tells the story of a young rock musician, Argy, who must confront important decisions about his future after suffering a crisis of confidence just hours before a major homecoming gig. Featuring an outstanding cast of actormusicians
led by Tom Milner, the show premieres Saturday 29 September until Saturday 20 October.

Then in November, the internationally acclaimed Russian State Ballet and Opera House return to the Belgrade with another sumptuous triple-bill of classic ballets, all accompanied by a magnificent live 30-piece orchestra. Rediscover the fairytale magic of Swan Lake on Thursday 1, followed by the tragic romance of Giselle on Friday 2. On Saturday 3, the ever-popular The Nutcracker rounds off the trio with festive fun, offering a great excuse to get Christmas started early.

Finally from Thursday 15 until Saturday 17 November, the famously inventive Told By An Idiot will delve into the UK’s ongoing drugs debate with a brand new play by Leo Butler. Inspired by a real-life encounter with government drugs tsar Professor David Nutt, All You Need Is LSD tells the story of Butler’s own participation in the world’s first LSD drug trials since the 1960s. Join him for a madcap tumble down the psychedelic rabbit hole in search of enlightenment – and of course, a good story.

Tickets to all of these shows and more are available to book now by calling the box office on 024 7655 3055, or visiting www.belgrade.co.uk where prices are even cheaper.