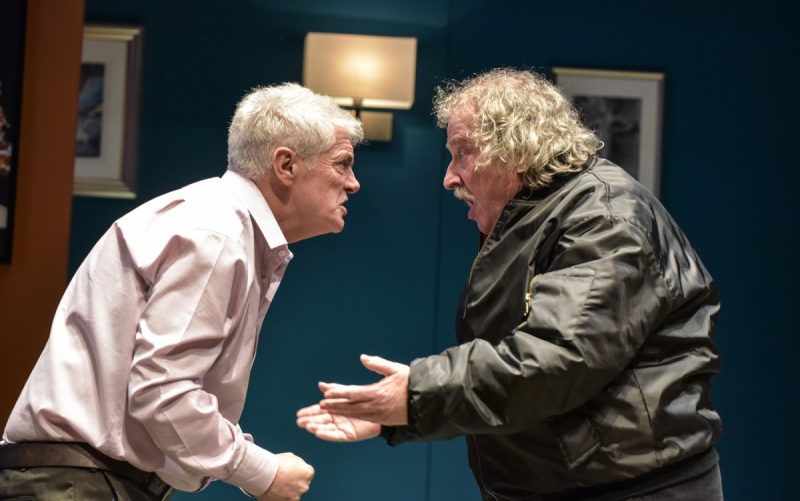 Octopus Soup Is a razor-sharp new comedy starring Nick Hancock, star of West End hit An Evening with Gary Lineker and host of iconic TV shows Room 101 and They Think It’s All Over, with Paul Bradley who played the much-loved character Nigel Bates in EastEnders and Elliot Hope in Holby City, Gillian Bevan, Carolyn Backhouse and Eric Richard who played Desk Sergeant Bob Cryer for 20 years in The Bill.

Produced by the Belgrade Theatre and currently running in their B2 auditorium, our resident fan of comedy, Lilith Holsey-Sheppard went along to catch the show for herself and give us her verdict.

There is something about the unusual title that stirred my curiosity and along with the star-studded cast, I was sold by the idea of this brand-new British Farce. As you enter the auditorium, we’re immediately invited into a home office, a table sits in the middle prepped and organised for a meeting and a large screen tv is mounted on the back wall.

Seymore, Nick Hancock, enters the stage removes his trousers to put them in a trouser press and ensures he has everything he needs on his table for a very important conference call. Heading off stage to another room a burglar, Paul Bradley, enters his house and starts to rummage around for anything he finds worthy enough to sell. At first their paths do not meet, but it doesn’t stay that way for long.

What follows is a madcap situation involving an insurance consultant, an actress, a thief, a CEO, an underworld boss and, of course, an octopus……… What could possibly go wrong?

The cast are great! The dramatic actress wife Gloria, Carolyn Backhouse, is a favourite and reminds me so much of amateur thespians I have met over the years. G.I.T Boss Virginia, Gillian Bevan, is everything a forthright company director should be and Alan the Underworld Boss, Eric Richard, adds a real twist into this comedic tale.

Octopus Soup is a clever, witty new show that really did have the audience laughing out loud. A thoroughly brilliant, new show.