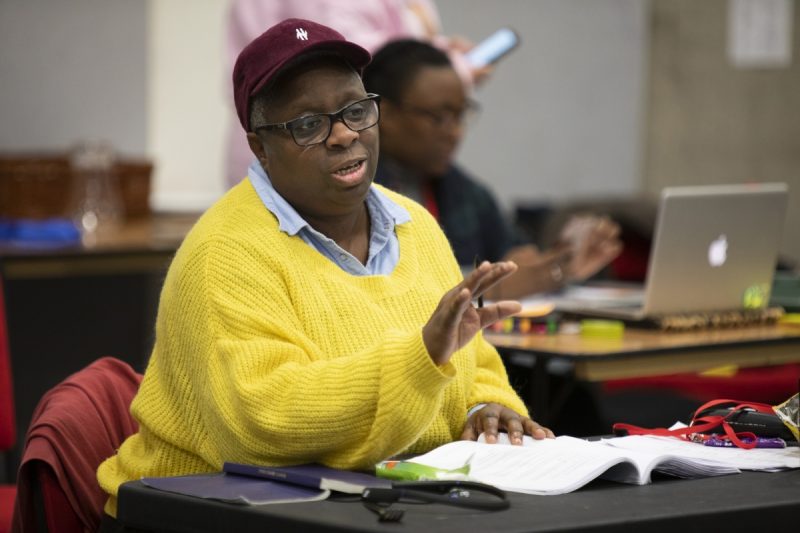 This January, Janice Okoh’s searingly funny play The Gift makes its world premiere in Coventry before embarking on a UK tour.

Co-produced by Eclipse Theatre Company and the Belgrade Theatre Coventry, this piercing comedy-drama draws inspiration from the real-life story of Sarah Bonetta Davies – a West African girl “gifted” to Queen Victoria – to explore themes of interracial adoption, imperialism, cultural appropriation and drinking tea, digging into the question of what it means to be British.

The play is directed by Dawn Walton – her first new production for Eclipse since stepping down as its artistic director earlier this year, and forms part of its Revolution Mix project, which aims to offer up the largest ever delivery of Black British stories across theatre, radio and film. 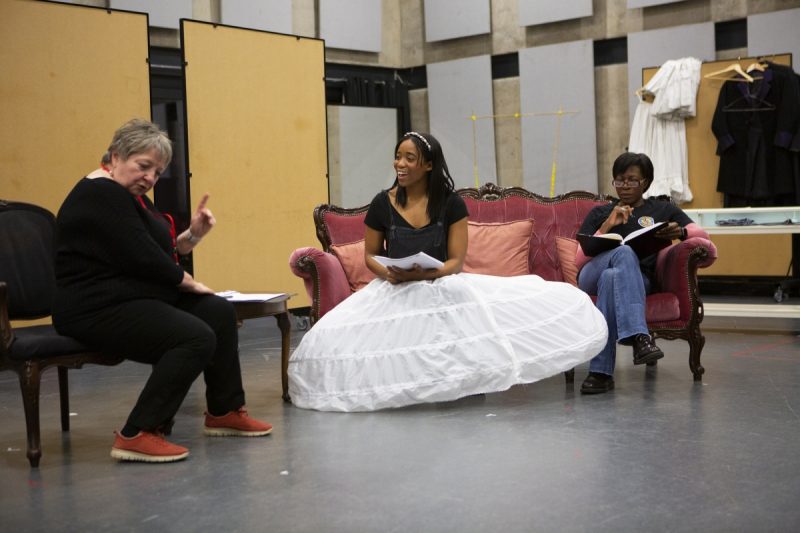 Joanna Brooks, Shannon Hayes and Donna Berlin in rehearsals for The Gift

Ahead of its Coventry premiere from 18-25 January, Dawn and Janice told us more about the origins of the play, and what audiences should expect from it.

“The journey with this play started back in 2015, with a movement that I started with Eclipse called Revolution Mix,” explains Dawn. “The movement was about gathering Black writers from across the UK and inviting them to develop a body of work addressing the ‘missing’ British stories – the thesis being that those missing stories are all Black. We had a jumping off point of 500+ years of Black British history, and the story of Sarah Bonetta was just one of many stories that we found.”

“As a child, I’d heard about Queen Victoria having a black godchild, so when Sarah Bonetta came up, she immediately jumped out at me because I thought that must be who I’d heard of,” says Janice. “But as I began reading and learning about her, I discovered that it was actually Sarah Bonetta’s child that was Queen Victoria’s godchild, though everything has kind of been fudged over the years.”

This “fudging” of the facts is down to a variety of causes – and not all of them accidental. One of the first sources Janice turned to for her research was Queen Victoria’s diaries, but those proved less revealing than you might imagine. 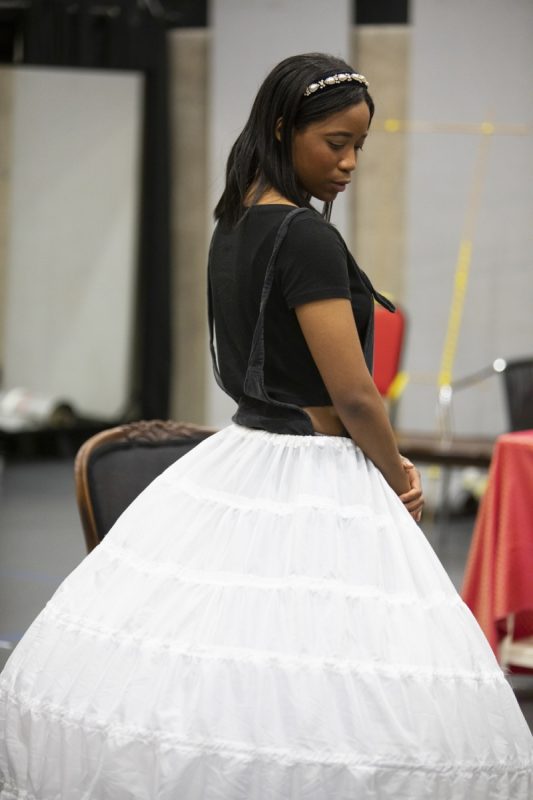 Shannon Hayes in rehearsal for The Gift

“Queen Victoria writes about a couple of meetings with her, but there’s actually not much there. But then, as you may know, the diaries were censored by her daughter, Princess Beatrice. There is a book about her, so to begin with I had one book and those diary entries, but then as the process went on, I discovered another book written by a Nigerian historian about Sarah’s husband, which had a lot more information in it about her life in Nigeria and just other aspects of it.”

In some ways, though, the scarcity of information about Sarah and her life was itself something of a gift, leaving lots of room for imaginative licence.

“I think it’s important to say that it’s not in any way a biography of Sarah Bonetta,” says Dawn. “Thematically, what we were really interested in was the notion of someone being adopted, or ‘gifted’, in a sense. In Act One, you’ve got a real situation with someone who has been cross-culturally adopted, and then in the second act, you’ve got a similar situation in a contemporary setting, that really explodes that idea.

“That allows us to have a conversation that’s not just about adoption,” she continues, “but more broadly the notion of culture and what that means in a race setting – what is perceived as being of a particular culture versus what is seen as belonging to another culture, for example, and ultimately what it means to be British, or more specifically English.” 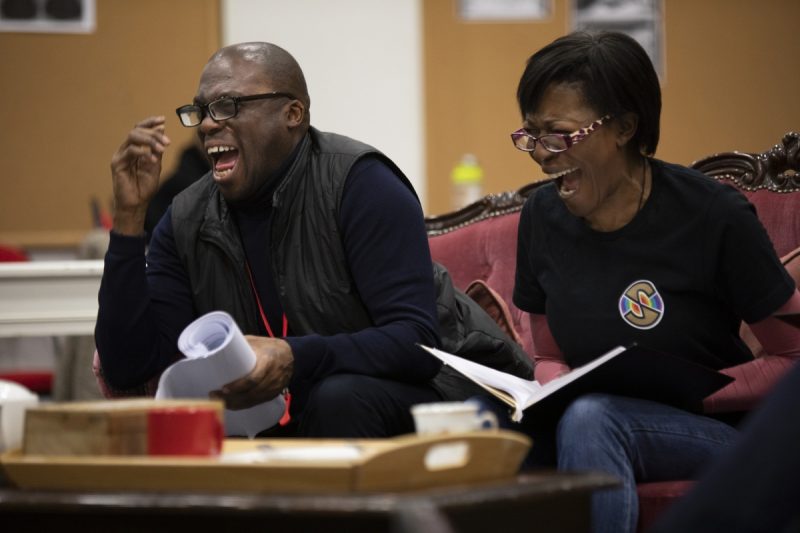 Dave Fishley and Donna Berlin in rehearsal for The Gift

It’s a timely subject which has hit the headlines recently, with stories of would-be parents refused the right to adopt on the basis of their perceived cultural differences from the children in state care. It’s perhaps unsurprising, then, that the adoption of a white child by the plays modern-day Black protagonist (also called Sarah), is met with a nosiness verging on disbelief by her new neighbours.

“In the news this week there was a Sikh couple who won a massive court case of £120,000 after being told that they couldn’t ‘cross-culturally’ adopt, and that they should go somewhere else to look for a child,” says Dawn. “I’m interested in what we are saying with this. How can we talk about living together when something as basic as parenting is challenged in this way?

“So it’s a really topical debate, but it’s also something with roots all the way back to the days of empire – if you look at how colonialism was seen as a kind of ‘parental’ approach to the world, then what we’re now seeing is the result of that ‘parenting’ as all the chickens come home to roost.”

In the wake of the Windrush scandal, the fruits of colonialism have become a hot topic again of late. Meanwhile, in the arts and media, the ways in which British history has traditionally portrayed, and the roles of people of colour within that, have also come under increasing scrutiny.

“There’s nothing more irritating to me than people getting upset about a person of colour being in a costume drama. This is the country of costume dramas, but many of them don’t fully represent the world as it was then, so actually all we’re doing is putting these ‘missing’ bits of history back where they belong. And after I started Revolution Mix, it quickly became clear to me that I wasn’t alone. There are similar things happening in dance, photography film – all over the place.” 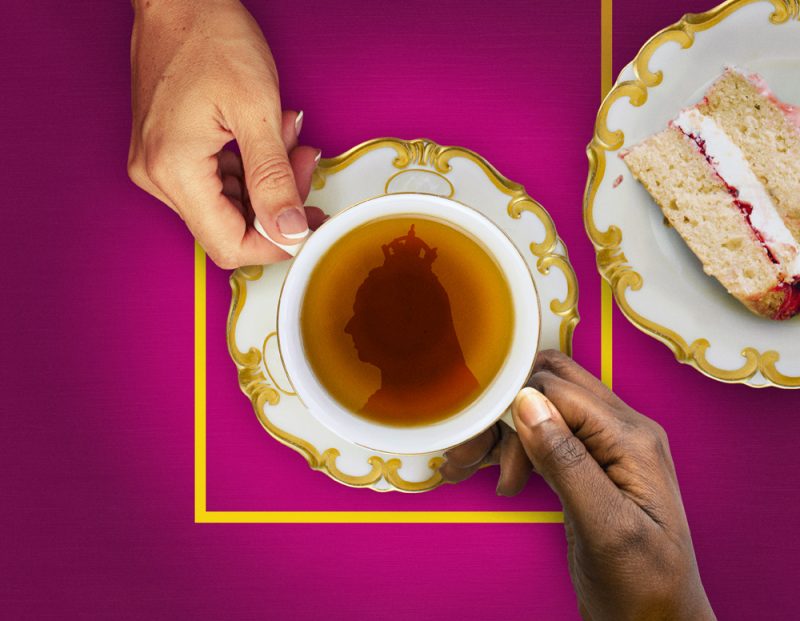 There’s certainly a lot going on in this play, and its great achievement is not only in coherently combining all these elements, but also in the lightness of touch with which it does so: what audiences can most expect to take away from this play is just how funny it is. In true English style, characters in both Sarah Bonetta’s era and our own tiptoe around the subject of race with cringe-inducing awkwardness, and Janice channels the frustration of her protagonists into a sharp wit that skewers the hypocrisy and absurdity of the situations they’re faced with.

“I think the style you should imagine is the style of the comedy of manners,” says Dawn. “It’s a very traditional piece: it has three acts, and the curtain goes up and comes down at the end of each act. But whatever you think it’s going to be, it’s not. Janice has a brilliant comic timing and loves a good gag, and what’s really enjoyable is how she’s taken something that’s really difficult to talk about and is using comedy to power us through it.”

“All of the acts have a different tone and style of comedy, but they all hang together by theme, and each one is funny in its own way,” adds Janice. “I love it. I love hearing the actors do it. I’m laughing constantly when I hear them read through it – which is really embarrassing, actually!” she laughs.

“Structurally it has been a challenge, because it’s like three different plays,” admits Dawn. “But ultimately they all hang together brilliantly, and there’s a great denouement at the end – a rather shocking and surprising conclusion – which naturally we won’t be spoiling. But there’s so much in this: you’ll learn quite a bit that you can go away and look up yourself afterwards if you want to, you’ll definitely laugh a lot, and expect to gasp!”

The Gift premieres at the Belgrade Theatre Coventry from Saturday 18 until Saturday 25 January.

Tickets are available to book now by calling the box office on 024 7655 3055, or visiting www.belgrade.co.uk where prices are cheaper.