TAKE YOUR VACATION VIA VIDEO 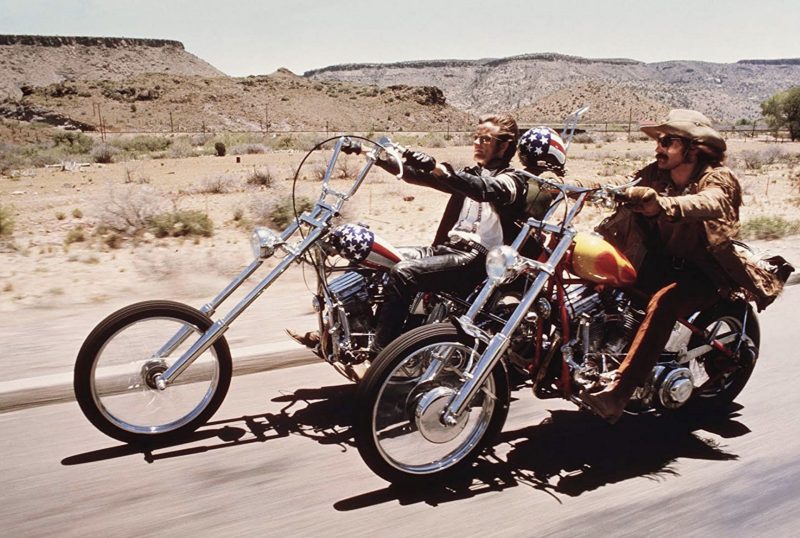 Life in lockdown means that many of us are house bound and in search of entertainment and escapism. While regular travel is on hold for now, keep that feeling of wanderlust alive by diving into a blockbuster or classic movie to transport you away from your living room and inspire you to visit these destinations in the future.

The New England states have provided the backdrop to iconic movies including:

Mystic Pizza: Grab “a slice of heaven” at Mystic Pizza, the place made famous in the Julia Roberts movie of the same name. Most of the movie’s scenes were filmed in nearby town of Stonington, as well as locations in Mystic, Groton and New Haven.

Revolutionary Road: Fairfield’s Sasco Beach was one of the many locations for this Academy-Award-nominated film that reunited Titanic stars Leonardo DiCaprio and Kate Winslet. Other Connecticut towns in this production include Trumbull, Beacon Falls, Bethel, Darien, Stamford, Greenwich, New Canaan, Norwalk, Redding, Shelton and Southport.

Amistad (1997): This Academy Award-nominated historic drama directed by Steven Spielberg was filmed in both Groton and Mystic, including a ready-built location at the historic Mystic Seaport Museum.

Many filmmakers choose locations in New Hampshire as the backdrop for their films because of our unique scenery and characteristics. From mountains to lakes, historic mills to town squares and more, it’s no wonder that movies filmed here include Academy Award winners, box-office hits and cult classics. Movies include: Jumanji, The Sensation of Sight, The Thomas Crown Affair, the Cider House Rules, In Dreams, The Good Son, The King of King, On Golden Pond, Disappearances, The Skulls, Way Down East and Life Free or Die

Elizabeth Strout’s Pulitzer Prize winning novel Olive Kitteridge took readers to Crosby, a small coastal community in Maine.  The HBO miniseries was filmed in Maine.  There’s no such thing as a simple life. Frances McDormand, Richard Jenkins and Bill Murray star in this four-part miniseries about a woman, her family and the small, quiet town in which they live — abound with crime, illicit affairs and unexpected tragedy

Now, with Strout’s sequel Olive, Again, we’re taken back to Crosby, which is based on the real and truly delightful communities of Brunswick and Harpswell.

27 Dresses: This comedy starring Katherine Heigl was filmed in Providence, Charlestown, East Greenwich, and other Rhode Island towns! Two Newport mansions, Rosecliff and Marble House, were also used in the making of the movie.

The Great Gatsby (1974) No, not the one with Leo in it. This 1974 film used Newport’s Rosecliff Mansion and Marble House as Gatsby’s mansion. Yes, that means that if you visit these historic manors you can walk on the same grounds that Robert Redford and Mia Farrow explored.

Little Women is based on Louisa May Alcott’s famous novel of the same name. The story follows the lives of the four March sisters, Meg, Jo, Beth and Amy as they grow from childhood to adulthood after the Civil War in America. With their father away fighting, the girls face poverty and other social challenges.

The movie is filmed in Massachusetts, the story is set in Massachusetts and the author of the novel, Louisa May Alcott lived in the state. The film boasts an elite cast of Oscar and Golden Globe winning actors including Emma Watson, Meryl Streep, Timothée Chalamet and Saoirse Ronan.

In honour of the film’s release, Massachusetts Film Office has created a film tourism map featuring locations where filming too place, which can be visited and enjoyed today. Locations include the cities and towns of Boston, Canton, Concord, Franklin, Groton, Harvard, Ipswich, Lancaster, Lawrence, Stoughton and Waltham.

Some more classic movies from Massachusetts include Manchester by the Sea, Daddy’s Home 2, The Finest Hours, Good Will Hunting, Hocus Pocus and The Witches of Eastwick.

Natchitoches, Louisiana is home to the hit movie Steel Magnolias. The film starring Julia Roberts, Sally Field and Dolly Parton was written and filmed in the Louisiana town before smashing the U.S box office upon its release in 1989 and becoming an instant classic. Last year saw the film reach its pearl anniversary and in celebration the movie returned to cinema theatres up and down the U.S and UK.  As well as this, Natchitoches CVB have been sharing the Steel Magnolias tour for fans of the blockbuster. Enthusiasts will be able to visit 17 of the scenes and locations that were used in the film including the St. Augustine Catholic Church and the Tauzin Plantation Home.

The 2019 Oscar winner for Best Picture Green Book was also largely filmed in Louisiana. The film centres around the story of a working-class Italian-American bouncer who becomes the driver for an African-American classical pianist touring across the American South in the 1960s. Scenes from the movie were filmed across Southeast Louisiana including locations in Tangipahoa, St. Tammany, Ascension and Orleans Parishes. Most notably; Clover Grill, The Saenger Theater New Orleans, Orpheum Theater, The Maison Dupuy Hotel, Houmas House Plantation & Gardens, downtown Hammond and Ruby’s Roadhouse.

Here’s some more Louisiana movies to check out: The Princess and The Frog, The Curious Case of Benjamin Button, Divine Secrets of the YaYa Sisterhood and 12 Years a Slave.

The Big Easy has been the backdrop to many a film over the years! With more National Historic Districts than any other city in America, New Orleans is like one big movie studio, the perfect setting for visual storytelling.

Iconic 60’s film Easy Rider was largely shot in New Orleans.  Considered as one of America’s formative counterculture films, it is also one of its most honoured, winning eight of the 14 Oscar nominations it earned and several international awards. The film centres around two bikers driving from LA to New Orleans in time for Mardi Gras. Using famous landmarks such as the St. Louis Cemetery and various streets during the festival. You can visit many of the locations used in the film.

Horror gothic epic Interview with the Vampire starring Brad Pitt was filmed across the Crescent City.  In addition to the shots taken throughout New Orleans’ French Quarter, much of the movie was filmed east of New Orleans at Oak Alley Plantation. Explore the 25 historic acres of the Vacherie, LA-based plantation.

The summer 2017 box-office hit Girls Trip was all about adventure and sisterhood in New Orleans. Since its premiere, the movie has inspired women far and wide to take their own “girls trip,” to the Crescent City to experience the world-renowned Essence Festival. In addition to the famous Bourbon Street scene and the Essence Fest action at the Ernest N. Morial Convention Centre.

Also take a look at The Pelican Brief, The Big Easy, King Creole and A Streetcar Named Desire.

North Carolina has a long-distinguished film history, and it only continues to grow each year. And with hundreds of productions having been shot here since 1980, it makes sense that a number of them ended up winning – or were nominated for – Oscars, as well.

Lovers of Dirty Dancing have the time of their lives re-enacting the iconic lake lift scene from the 1987 classic, which was largely shot in Lake Lure among the Blue Ridge Foothills. Each September, celebrate the film at the Dirty Dancing Festival, which draws fans for an annual Lake Lift Competition, a lakeside screening of the film and overnights in Dirty Dancing-themed cabins at The 1927 Lake Lure Inn and Spa.

Some of the most intense scenes of the 1992 adventure The Last of the Mohicans were shot on and around Chimney Rock, a 315-foot-long jutting rock formation, about 40 minutes east of Asheville. Hike to panoramic views of forests before trekking the Hickory Nut Falls Trail to the 404-foot falls (one of the tallest in the East). For a less demanding hike, follow the Great Woodland Adventure Trail, which winds past 12 Discovery Stations.

The infamous District 12 in Hunger Games was set and filmed at the Henry River Mill Village in Burke County, North Carolina. Hollywood thought the abandoned village would serve as the perfect setting for the post-apocalyptic dystopia. The current owners offer behind-the-scenes filming tours of District 12 which include fun scene re-enactments, archery Lessons and archery tag.  You can visit inside the Everdeens’ shack and also hear the President Snow origin story as told in Suzanne Collins’ forthcoming prequel, in which Snow is chosen to mentor a Tribute from District 12.

The Academy Award winning movie Three Billboards Outside Ebbing, Missouri was also filmed in North Carolina as well as some classics from Nicholas Sparks; Nights in Rodanthe, The Longest Ride, The Choice and Safe Haven.

Tennessee is not just renowned for its music. Many famous films have connections to the Volunteer State, including the Johnny Cash biopic, Walk the Line. Starring Joaquin Phoenix, the film tells the story of Cash’s life through the music industry and beyond, and is filmed in many famous Tennessee locations, including the Tennessee State Prison, the Mid-South Fairgrounds in Memphis, and the Arcade Restaurant.

The Blind Side is an Oscar-winning film based on the true story of Michael Oher, an aspiring football player who has an impoverished upbringing, whose life changes when he is taken in by a well-off white family living in Oslo, Tennessee. Starring Sandra Bullock, it chronicles Oher’s journey to becoming college standout football star, and first round NFL draft pick in 2009.

The Bristol Motor Speedway was also used during the filming of Days of Thunder, starring Tom Cruise and Nicole Kidman, based on an aspiring race-car driver who sets his sights on competing in the Indy 500.

For more, take a look at The Firm, Coal Miner’s Daughter, The Matrix and Hannah Montana: The Movie

The cinematic tradition of Texas is rich. It includes classics like Giant and The Alamo, and cult favourites like The Texas Chainsaw Massacre and Paris, Texas. The Lone Star state has been the setting for epics like Lonesome Dove and for idiosyncratic, personal stories like Rushmore.

The Texas Film Commission has created a map showing the Texas sites made famous in Hollywood classics. The map focuses on sites that appeared in movies, dating as far back as 1957’s Giant, but includes TV sets as well, perhaps the most well-known being North Texas’ iconic Southfork Ranch was the primary setting for thirteen seasons of Dallas. Click here to see more.

Dozens of movies have been filmed in or are about West Virginia. These include We Are Marshall, starring Matthew McConaughey and Matthew Fox, which is the story of the 1970 Marshall University football team plane crash and addressed the rebuilding of the football program and the healing that the community undergoes in the aftermath.

The Mothman Prophecies, based on the Mothman legend of Point Pleasant, stars Richard Gere and Laura Linney and is about a reporter who is tasked with researching the supernatural phenomenon.

The iconic New River Gorge Bridge in Fayetteville was one of the filming backdrops for the Josh Duhamel film, Win a Date with Tad Hamilton! Scenes were also filmed in Grandview and at the London Locks on the Kanawha River.

Super 8, which was directed by J.J Abrams and produced by Steven Spielberg, was filmed in Weirton, WV and starred Elle Fanning. October Sky is based on the lives of four young men who grew up in Coalwood, WV and stars Jake Gyllenhaal. Sandstone Falls in Hinton, WV was featured in the family favourite movie Lassie. Meanwhile, Patch Adams, starring the late, great Robin Williams, is the story of a doctor who resorts to comedy to treat patients in his institute, which he built in West Virginia.

You can check out more films with connections to West Virginia here.