The Most Photogenic Spots in Croatia 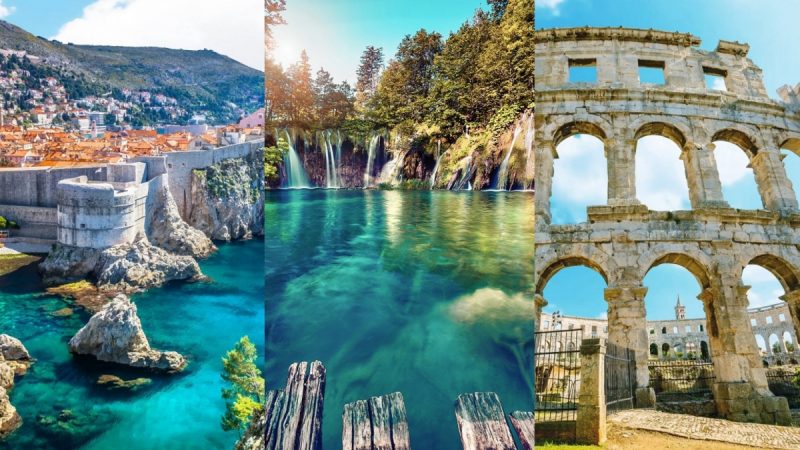 Croatia is one of the most striking holiday destinations in the world, and a picture-perfect place to snap Insta-worthy uploads. From natural beauty, scenic coastlines and cute cobbled towns, there’s plenty to inspire your next photo album. Check out our three top locations with photo tips on where you can capture those all-important holiday shots. 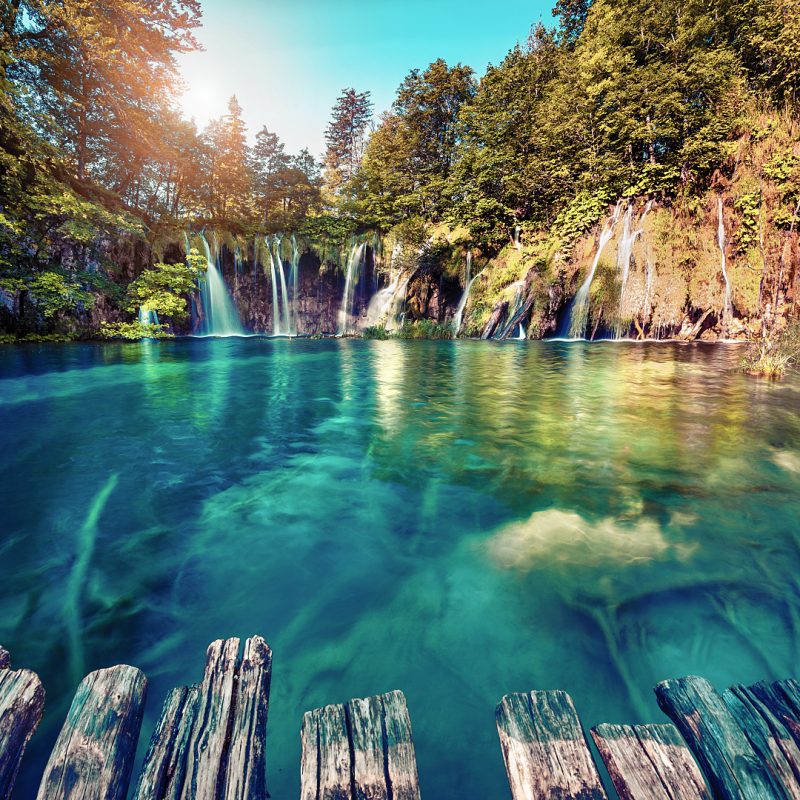 Protected in one of the oldest national parks in the region, the Plitvice Lakes has become famous around the world as one of the most beautiful natural spots. It’s no wonder really with boardwalks suspended over turquoise waters, spectacular viewpoints and photogenic waterfalls; this is the type of place that is perfect for visitors of all ages.

With plenty of ground to cover (73,000 acres to be exact), there are several ways to get around the lakes. There are four hiking trails split into seven different routes to tour the park. If hiking isn’t your thing, you can also get around by boat or shuttle. You can visit in all seasons. In summer the park boasts lush greenery and in Winter, there’s likely the park is likely to be covered in snow and the waterfalls frozen. The orange and browns of Autumn are also a hit as are the fresh spring days with rushing waterfalls from the melting snow. May, June, September and October are considered the best months. July and August are the busiest months, so avoid if you dislike the crowds. 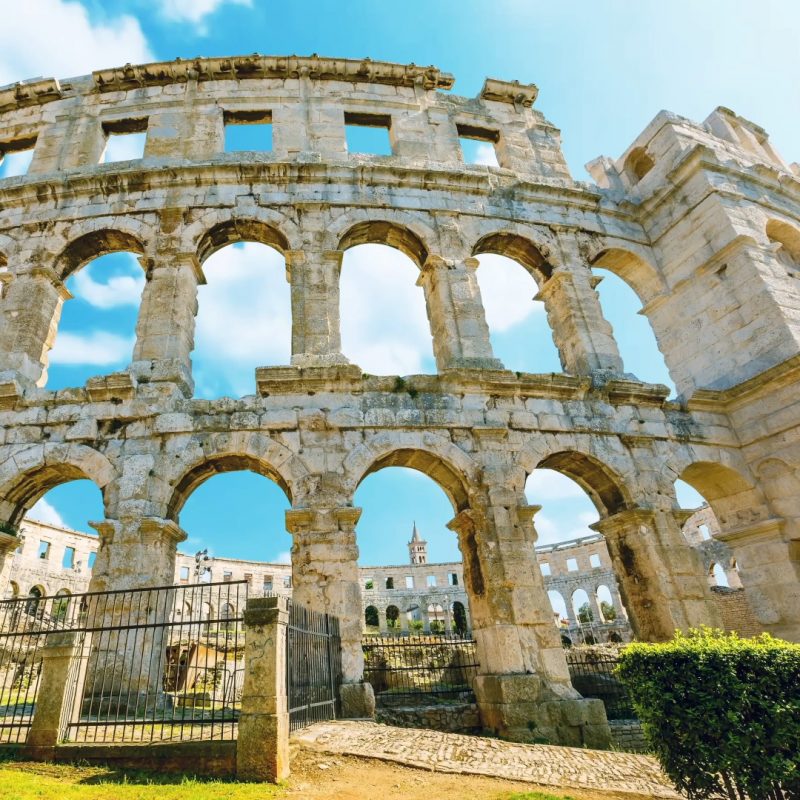 Rome doesn’t have the only colosseum. Around a two-and-a-half-hour drive from Spilt you’ll find The Arena of Pula. Constructed between 27 BC and 68 AD, it’s the 6th largest coliseum in the world and only remaining Roman amphitheatre to have a four-sided tower. You can get a decent view of the Arena from just walking around the outside, but the entrance fee allows you to clamber around the stones and visit the underground chambers. The underground passages, once used by the gladiators, and built to hold 20,000 spectators is still used today as an outdoor cinema and to host events as diverse as ice hockey, foodie markets and much more. Make sure you check out what events are on during your visit.

Fly direct to Pula from Birmingham with Jet2.com and TUI. Flights depart three times a week during the summer season on a Tuesday, Saturday and a Sunday. Once you land, there are shuttle buses that take you directly to Pula bus station and from there, taxis and city buses take you to the various parts of town. Alternatively, you can rent a car from Pula Airport. 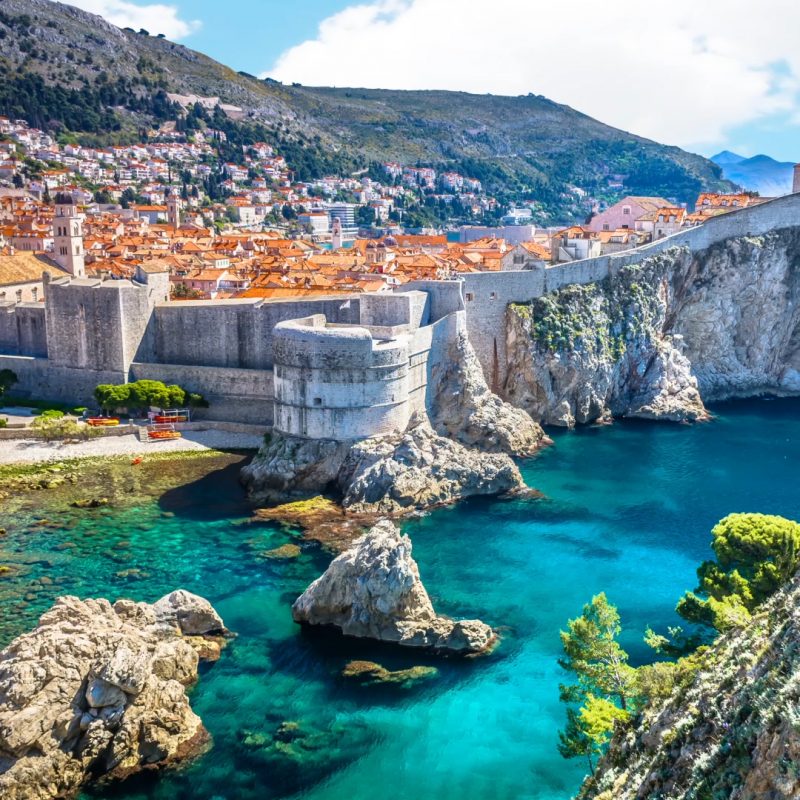 The old city walls of Dubrovnik are one of the city’s best-known features. Built-in the 10th century and modified in the 13th and 14th centuries, these tough walls – as high as six metres and up to six metres thick – provided a solid defence against invaders back in the day. Game of Thrones fans will be excited to learn that a number of scenes were shot in, around and on top of the walls. Totalling nearly two kilometres in length, Dubrovnik’s city walls make a great spot for a casual stroll and offer numerous excellent views and perfect picture opportunities.

Fly direct to Dubrovnik from Birmingham with Jet2.com and TUI. Flights depart four times a week during the summer season. Once you land, you can jump on one of the regular buses that take you direct to the city or in a taxi or private transfer.