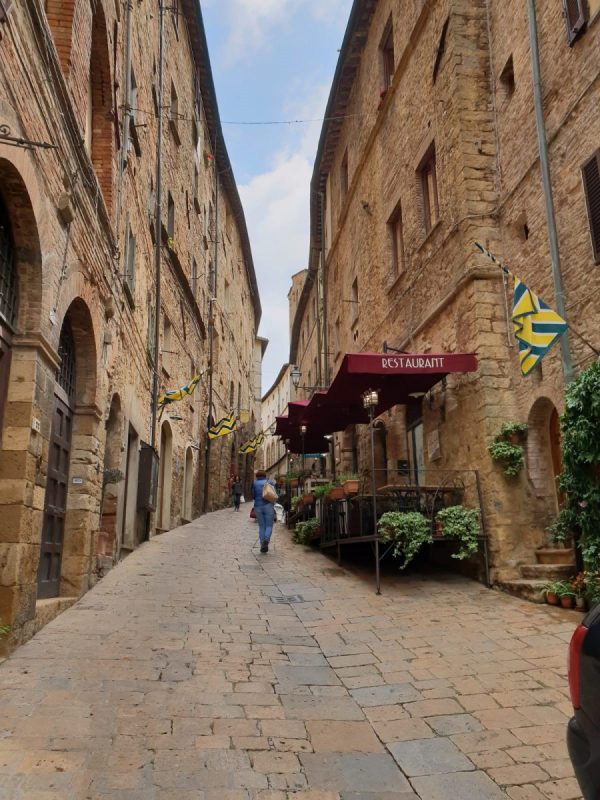 One of the great joys of travelling through Italy is discovering that it is, indeed, an idyllic destination. If you crave La Dolce Vita then the region of Toscana famed for its beauty, history, food and wine, should be on the bucket list of every foodie traveller writes Anita Champaneri.

I underestimated its charm and beauty, “it can’t surely be like those photos in the glossy mags?’  But it really is.  A destination that should be a romantic backdrop to many a movie love story.

After a short flight from Birmingham to Pisa we were taken straight to La Bonnano Hotel, a central destination ideal for a sight-seeing base. Like most Italian provinces the province of Pisa has a strong food and wine heritage and we were on a mission to investigate them all. 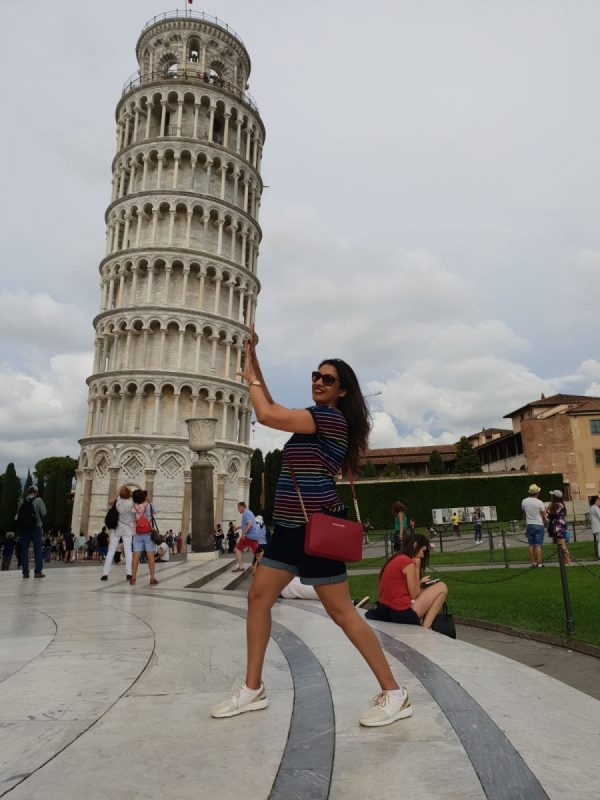 First stop was a traditional Tuscan lunch in the beautiful setting of the olive farm in Calci hosted by Christine Ruski whose olive oil business has been in the family since the 1700s.  Red wine is a must, so there was a glass of Vino Rosso to be enjoyed at every opportunity.

We had a traditional peasant meal of bread olive and tomatoes, some anti pasti and a to-die-for pannacotta that made everyone stop dead in their tracks with gasps of awe. 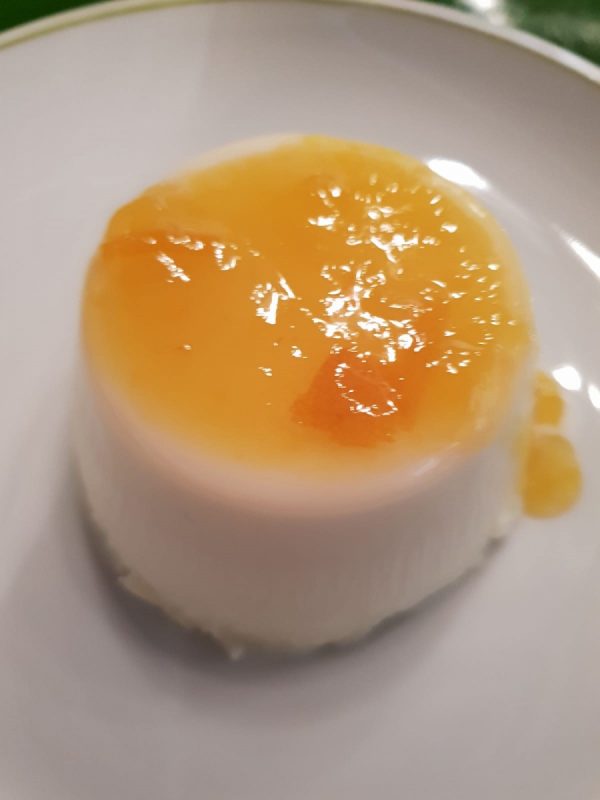 After a tour of the olive oil making process and a visit to say hello to some friendly donkeys we headed to The Charterhouse, a former monastery, which was built in 1366 and is an impressive building with 150 rooms where the monks used to live in quiet solitude.

It was also home to the Natural History Museum, which showcased an incredible display of stuffed animals and whale skeletons.

Pisa is also known for the beautiful villas along the Silk Road which are nestled in some fantastic scenery. We visited the Villa Alta, which occupies a wonderful panoramic position that overlooks Miracle Square and the sea. The insides are decorated in warm yellows with frescos adorning the walls. There are some wonderful stories behind these homes occupied by the rich, which the new owners are all too eager to tell.  In particular, the love stories of the rich and ambitious. 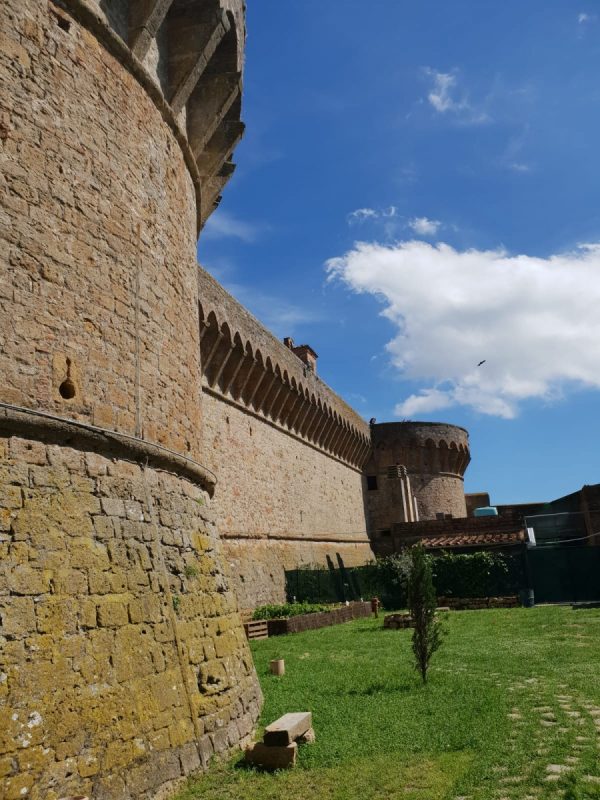 The Villa di Corliano had some even bigger stories to tell. Namely by an overbearing American woman trying to connect writer Mary Shelly and Dr Frank’s Kidney Stones! Don’t ask. It’s a beautiful building with high ceilings and impressive frescos, created by travelling artists of the time.

Day two was one of my favourite days. We took a pit stop at Museo Piaggio, a museum created to highlight the legacy of the iconic Vespa scooter.  Fans would love this unique collection of colourful and stylish two wheelers. But it wasn’t long before we had to scoot off to explore more breath-taking parts of Tuscan countryside.

For great views of Tuscany, you need to head to the historic Castello dei Vicaro in Lari. The architecture has remained largely unchanged over the past four centuries and was the residence of the Vicario, the mayor. The views are magnificent, and you can see the entire valley of the River Arno for miles.  Built on the hill of Lari, I’ve never seen anything like it, the scenery is spectacular and so utterly tranquil.

Sat at the foot of the castle is the family run Martelli business, based on one of the most tranquil streets I have ever set foot on. 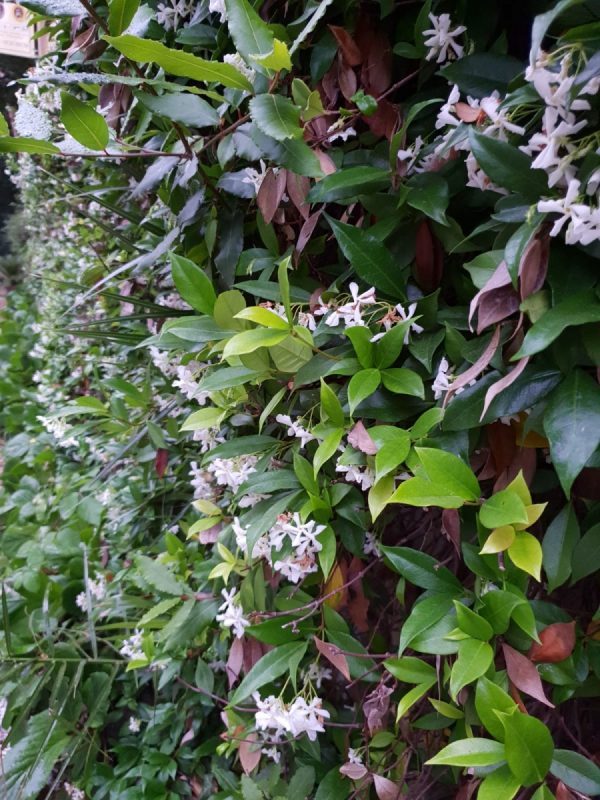 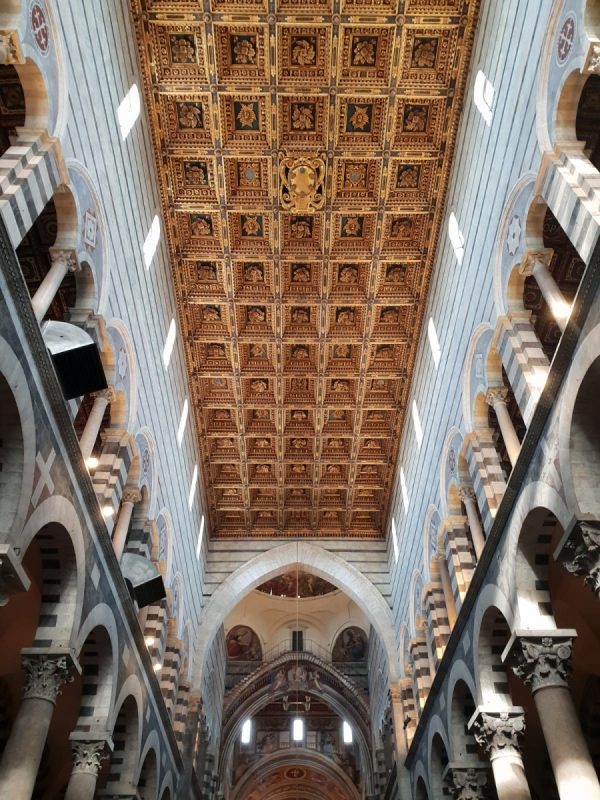 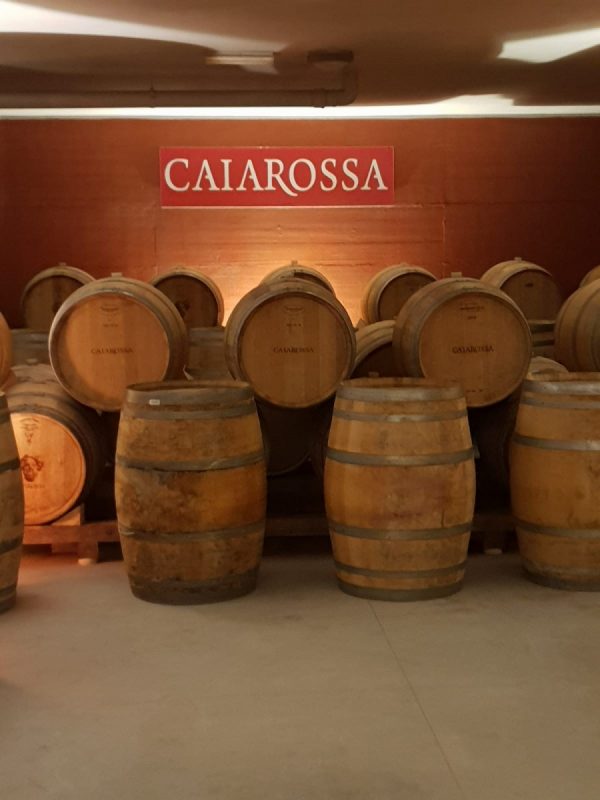 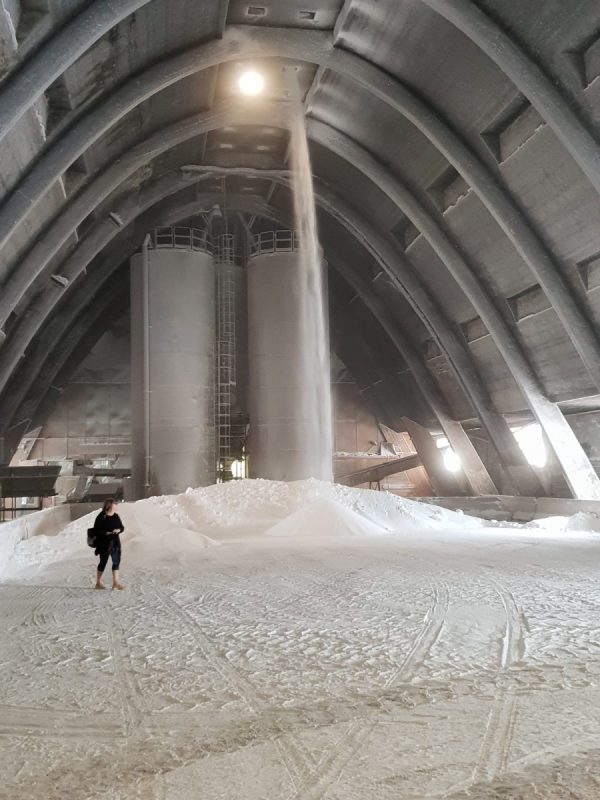 If you have ever wondered how real pasta is made, the Martellis has been producing their own special brand since 1926.  We were taken through the process from wheat to dough, through a bronze cutter and then drying for 50 hours. Only family members work here and they are passionate about keeping up the tradition of pasta making from spaghetti to maccheroni and everything in between. They were very welcoming and we loved their yellow uniforms resembling Super Mario characters!

Like most Italian provinces the province of Pisa has a strong food and wine heritage and the Torre a Cenaia Estate is one of the wine producing farms you can visit to taste some of its fine wines and beers.  A picturesque estate covered in beautiful flowers we tried beer and sliced cheese and ham and took a horse carriage tour around the vast estate spotting wildlife along the way.

Obviously a trip to Pisa must include the Leaning Tower of Pisa. The iconic building has actually got a bit straighter and is back to the angle it was when Galileo Galilei was dropping objects from the top to test the theory of gravity.

We quickly climbed up to the top of the cylindrical building, hard for the unfit but the impressive panorama of Pisa was a reward in itself. 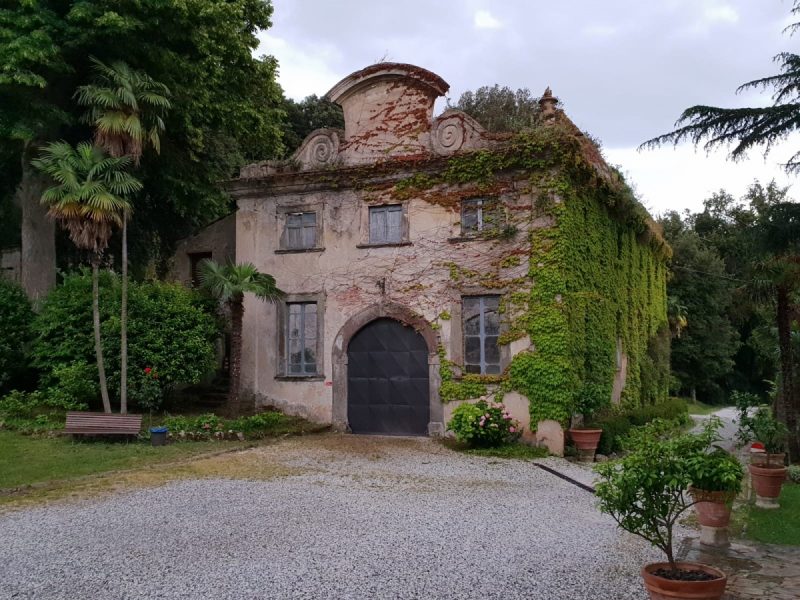 Next to the tower is the domed Baptistry, another grand monument with wonderful acoustics. Then there is the beautiful cathedral, with its impressive hall and 24 carat gold ceiling.

Alongside this is the Monumental Cemetery, which has some marvellously graphic frescoes from Medieval times, including The Triumph of Death, depicting stories of heaven and hell to keep the populace in line. We learnt so much about Italian history here.

After a visit to a working salt mine we ventured to the charming town of Volterra which pre-dates Rome to about 7thcentury BC. It has an extraordinary medieval charm, all cobbled streets covered in scented blooms of jasmine. Here too you can enjoy some great views of the countryside.

Lunch was at a traditional restaurant called Beppino, where we feasted on wild boar tagliatelle, sautéed pork chops with rosemary potatoes finished with a poached pear. Dreamy.

A stroll in the sunshine to The Fortezza Medicea, built on the highest point of the hill overlooking the town was our next treat. From the outside it is an imposing structure and is currently a maximum security prison, with some parts open to tourists. We got to visit a small section accompanied by two guides which I didn’t realise until later were two current inmates! 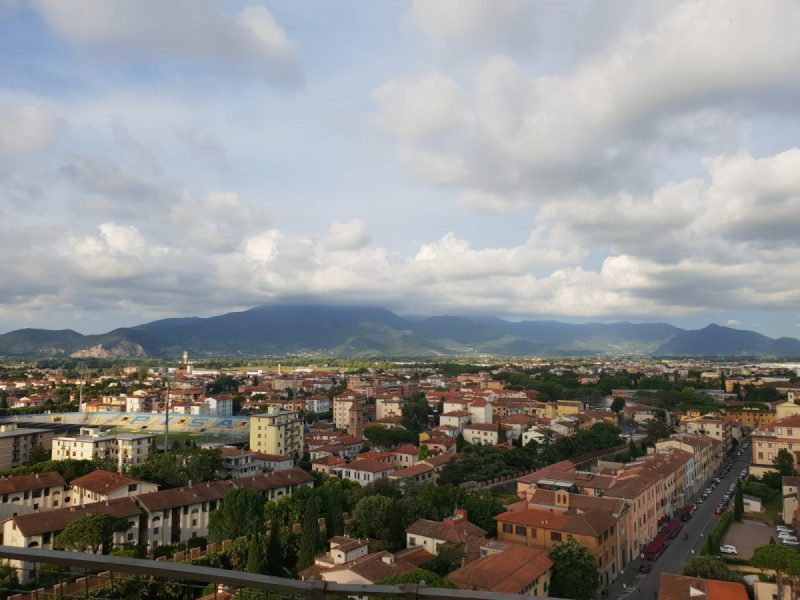 Then we took a short drive to the Caia Rossa estate in Riparbella, set in 15 hectares of beautiful organic vineyard and forest.  This was the Italia you dream of … a beautiful sunset, the rolling hills of vineyards, the scent of rosemary, the sound of crickets from the forest… it was all so picture perfect.

We learnt about their process of wine making from the resident French sommelier,  Julian, and tried several  varieties of wine, but it was over far too quickly.

Our final day was as the Natural Park Migliarino San Rossore Massacuccoli which is one of the largest natural coastal parks in Europe. We took a horse drawn carriage taking in the wildlife, the sea and the sunshine. We potentially may have lost the tour guide’s dog but we did get comically chased by a wild boar too!

Our terrific trip to Tuscany finished with our gang enjoying a gelato in the sunshine by the Leaning Tower amongst the bustling tourists. Bellisimo!

Anita Champaneri travelled with Jet2.com which offers flights to Pisa from Birmingham Airport up to two times a week and also flies there from East Midlands, Leeds Bradford, Manchester and Newcastle.

Fares with Jet2.com start at £49 one way or you can take a city escape with Jet2CityBreaks at the four-star Grand Hotel Bananno starting from £269 per person (based on three nights bed and breakfast, flights departing from Birmingham on July 12, 2018). To book flights visit jet2.com or for city breaks visit Jet2holidays.com/city- breaks or call free on 0800 408 5599.