The Show Windows Coventry: An Interview with Charlie Levine and Ella Lewis-Williams 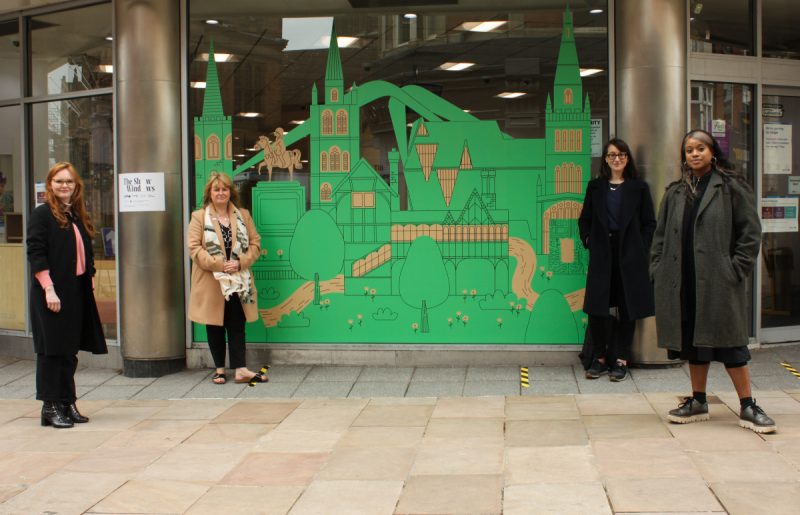 Chances are you’ve already seen bright flashes of Emerald Green around Coventry’s streets over the last few weeks but have you stopped for a moment to take a proper look? We hope so! The Show Windows is an art project in Coventry City Centre for Coventry City of Culture 2021 and features the bespoke artworks of local and international artists being displayed within the shop windows of Coventry.

Designed as ‘portals to another world’ the project has been designed to bring art out of the gallery and on to the streets, inviting audiences to rediscover and reengage with their city centres and, perhaps, start seeing them in a whole new light. Dluxe magazine’s Rebecca Rhodes caught up with The Show Windows Curator Charlie Levine and Ella Lewis-Williams the project’s Digital Content Manager, to find out more.

What are your roles within the project?

Charlie: I’m an independent curator. Born and bred in Birmingham, I’m thrilled to be back in Coventry, in the West Midlands, to realise a project called The Show Windows. It was about this time last year that I was invited to see how we could realise a public art project in the city centre using shop windows as exhibition spaces and now I am the curator of what has to be said is a dream project, putting artwork or creative pieces made by architects, designers, makers and creatives into shop windows around the city for the City of Culture.

Ella: I am the digital content manager for The Show Windows Project. I am an art critic and editor and I’ve worked with Charlie before on other public art projects. My role within this project is to discover, uncover and untangle all the secret hidden stories that exist within the artworks themselves, but also the places in which they are installed and the stories of the shops and their owners and to celebrate those.

Tell me about The Show Windows project.

Charlie: This is about us bringing art out of the museum or the gallery and putting it directly on to the high streets. There’s something about people being reintroduced to their public spaces and taking ownership back over their high streets through art which is exciting. Especially as many people don’t feel that these traditional cultural institutions are for them, they don’t feel confident in those kinds of spaces.. And that idea of being out and about feeling confident, also feeling excited and inspired and hopeful is part of our agenda. It’s also about helping audiences develop a creative taste; not everyone’s going to like everything and that’s OK as well. I think thats a really key part of engaging with art is knowing what you like and what you don’t like. So for me, it’s breaking down some of those barriers about accessing the creative industries.

One of the inspirations for the project was the L Frank Baum book, The Art of Decorating Dry Goods Windows and Interiors, which was published the same year as the first famous The Wonderful Wizard of Oz book, 1900. The link to Baum encapsulates the idea that these windows can be portals to other worlds, to inspire imagination, adventure and hope. That idea really shaped the project which is why we decided to rethink Coventry and its skyline as the Emerald City, the place in The Wizard of Oz that’s about magic, culture, creativity and the unexpected which is exactly what Coventry is.

So, the brief was about picking up on that L Frank Baum theme but making it specific to Coventry.

Charlie: Something BID was really keen to do was give that kind of excitement and hope back to the shopkeepers themselves and those people that work in retail and service industries. They’ve been closed for so long and now they’re open, it is amazing that we can help celebrate them and their stories a bit more by putting those creative moments within the shop windows, which then encourages further conversation.

Ella: It feels like we’ve been released again back into the world and we have an opportunity to see what was always there with new eyes. Putting art directly into familiar public places invites peopleto look at their environments completely anew. Where previously they might have walked past somewhere without paying any real attention, now it suddenly becomes a place to stop, it becomes a moment, a surprising encounter. To then bring the shop owners into dialogues with artists and for them to see their shops anew as well, I think that’s what excites me the most. 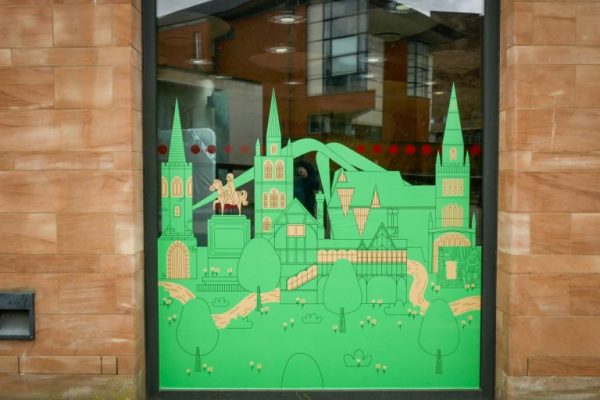 And as part of the project, I believe there is an App?

Ella: Yes. The Smartify App is the most downloaded museum and art gallery interpretive app in the world. So, it’s really exciting that we’re able to partner with them because it places The Show Windows project within the same critical creative context as places like the National Portrait Gallery, which also uses Smartify. Once you have downloaded the free app and enabled notifications it will ping if you’re near one of our windows and tell you all about it, which is really exciting. It also has a map function that shows youall of the window locatioins. Itworks via image recognition so youcan just hold your camera up via the app and media content will then appearing, telling you about the artwork and artist. For those who aren’t able to come to Coventry, they are still able to discover the artworks via Smartify, using the brows function which allows you to look inside museums and galleries all over the world through your digital device.

So how did you go about choosing the artists?

Charlie: What’s nice about the programme is that something will be happening every month. So for August we’ll be showcasing local Coventry creatives who will be mentored by some RIBA West Midlands architects to realise their own windows. In other cases we created a brief that we worked to and we sourced the artist to match the brief. For example to start the programme we knew that we had to do an exterior window piece and it needed to be flat because of the restrictions around going into shops at the time. So then it was about finding the right artist. Ben Javens is based in the West Midlands and produced an incredible piece of work at the Hub a couple of years back. He just understood shape and structure and colour in such a unique way to create this sort of 3D immersive piece of work so I knew and understood that he could translate his illustrative work into something architectural. We gave him the brief and he produced the most amazing sketches.

Walking around the city now you can see how much he understood what his brief was, the green is so vivid and you spot it immediately but it’s not intrusive. It’s not in your face, but it’s exciting, specifically how he shows the Coventry skyline and the delicacy with which he approached some of the subjects. He has actually said that because he works much more with characters and people, as soon as he nailed the Lady Godiva statue, he understood how to then approach the rest of the drawing. He approached it as a storyteller illustrator, with Godiva being his main character, and then he was able to create a city around her, which I think is lovely. As soon as you know that she suddenly takes on a different personality within the work.

What would you say visitors will get from coming to see The Show Windows?

Charlie: I think that the point of these windows is to be welcoming and it is an invitation, so for me it would be about ‘please do join us, please do RSVP and say yes to that invitation’ because they’re going to be different every month and they can be a real chance encounter- miss it and miss out! The windows are the starting points of a journey we want audience to go on.

Find out more about The Show Windows project at www.coventry2021.co.uk