The UK’s Most Spiritual Cities! 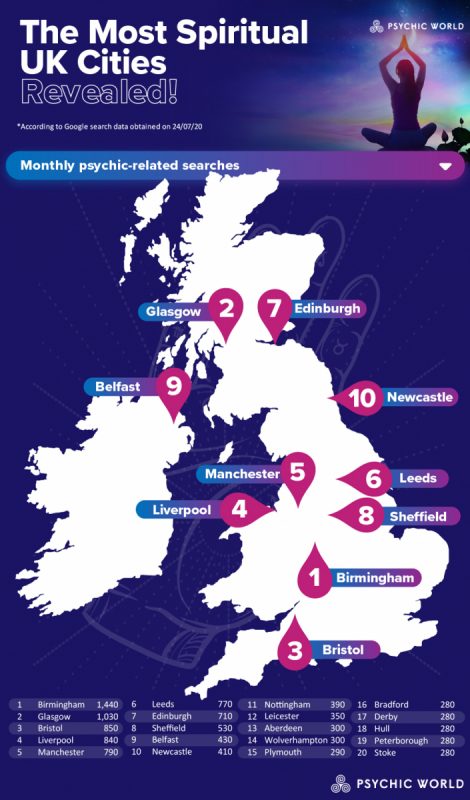 With a lot of time spent indoors, many Brits took up a hobby or two during lockdown – TheKnowledgeAcademy found in a recent study that some hobbies were more favoured than others.

We’ve even been tapping into our affinity for psychics – almost 80% of Brits sought psychic advice in recent months. But are some cities more spiritual than others?

Using Google Adwords to record the average number of monthly psychic-related searches in 30 of the UK’s biggest cities*, Psychic World can reveal which cities are the most spiritual!

Birmingham is the most spiritual city in Britain! 1,440 Brummies per month search for a combination of online psychics, tarot readings and more!

Brummies are followed in second place by those living in Glasgow. Could it be the abundance of Scottish ghost stories? Or the mystery of the famous Loch Ness Monster that gets their occult juices flowing, with 1,030 Glaswegians taking to Google to investigate the supernatural every month.

In third place is Bristol. At just under 1,000 monthly searches (850), their interest in psychic mediums is also strong as they claim one of the top spots – 260 of those 850 searches go to locating a ‘clairvoyant’ in the area.

Completing the list of top ten spiritual cities are:

Further down, in joint twentieth place are Stoke, Peterborough, Hull, Derby and Bradford – residents in these cities Google psychics 280 times a month. While smaller in numbers, these cities boast their own paranormal histories, with Stoke’s titular Alton Towers old enough to have a few stories of its own.

Those in twentieth place are followed by Plymouth (290 searches), Wolverhampton and Aberdeen (300 searches), Leicester (350 searches) and finally Nottingham (390 searches).