Over The Top. An Pun-Believably Funny, Alternative Christmas Show. 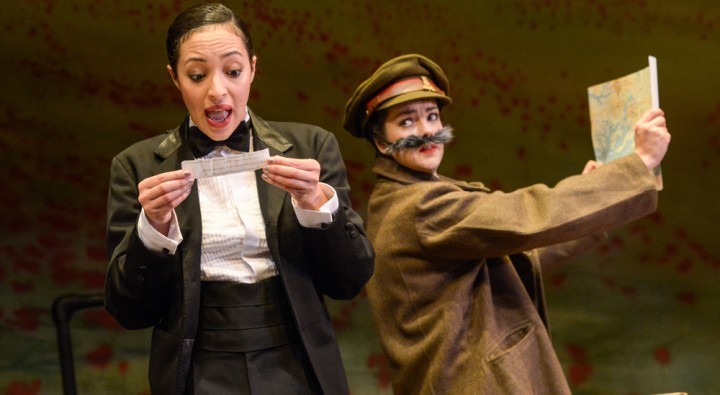 Over The Top is the alternative Christmas show now showing at Belgrade Theatre in Coventry. Celebrating two great centenaries of the year, the great war and the battle fought by the suffragettes. Set between the concert halls of the era and the frontline, the all-female cast is sent on a mission of great importance. Lilith Holsey-Sheppard went along to the press night performance to see this hilariously witty show.

The show starts in an old Music Hall with the grand master announcing the up coming acts of the evening. Evidently veterans from the front line, they have turned their talents to lifting he spirits of society during the great war. Out of the blue General Sidebottom , Laura Tipper, informs the troops that they will be sent on a mission of the upmost importance. So, the perilous adventure to the front line begins.

The all-female cast are brilliant, each one delivering the clever, pun-filled dialogue seamlessly. Personally, I love play on words and the clever script is one that kept me laughing out loud through the hour-long show. Each cast member Aimmee Powell, Kimisha Lewis & Miriam Grace Edwards bought incredible energy & comedic timing in this slapstick comedy that makes several nods to the city of Coventry too.

Written by Nick Walker and directed by Katy Stephens, there was also a very serious message too. We have celebrated to very important centenaries this year and this nod to both tells the true story of four very brave woman and their roles on the front line. As each one recounts the individual roles on the front line, the house falls silent for the first time. Lest We Forget.

Over The Top is an incredibly funny homage to the bravery faced by so many. If you are looking for a hilarious alternative show this Christmas, then this show is most definitely it!

Over The Top runs till December 29th at Belgrade Theatre, Coventry.